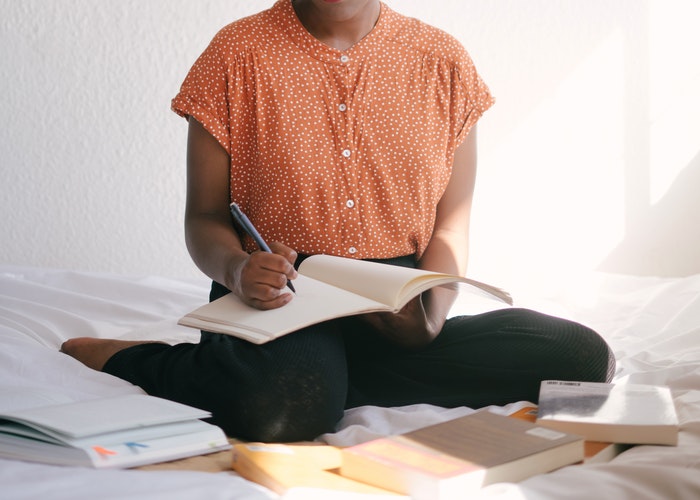 Let me start by saying: I am not a “Type-A” person. I am not one of those people who gets excited by, say, creating Excel sheets. I’m more of a creative. I like words, letters, and stories. This is why I’ve always had zero enthusiasm when it comes to budgeting.

But when I moved abroad and started freelancing, I had to keep track of my money and spending. The panic of not having a fixed income forced me to confront the world of budgeting spreadsheets and money tracking apps. These are and helpful tools, but after a while, I would look at my spending chart and start to feel bad. Guilty. Negative. Yes, these apps were a great way to watch my spending, but I started to see things in a very black-and-white way. The numbers showed my behaviors but not my intentions.  They provided a blurry picture of reality.

Worse, I started to connect the amount of money I had to my self-worth. On days when I earned a lot of money, I felt good about myself. But then I became overly attached to and terrified of spending any money I’d earned. I would hold onto my money as if it was the only money in the entire world and I would never get more. I soon realized that no matter how good I was at managing my money, I was still developing an unhealthy relationship with it, agonizing over my bank accounts and numbers.

Journaling has always been a way for me to process my emotions. So I thought I would use it to help me process my emotions around money, too. Here is how I used pen and paper to think more positively about my money and how I spent it.

I wrote a letter to money.

As I sat on the beach one morning, a notebook and pen in hand, I started to write a letter to money, as if money was an ex-boyfriend and I was coming clean about how I felt. I wrote about how much worry money had caused me. How I was afraid that I would run out of it. I came clean about how much I obsessed over it, and how much I hated to admit that I needed it. By writing down my negative thoughts on money, I was able to see how much negative energy I put towards money. This helped me to let go of some of those toxic emotions and thoughts.

But next, I thanked money. Because if it wasn’t for the money I wouldn’t have many wonderful things in my life.

Money itself doesn’t make me happy, but it’s brought me things that do make me happy. Because of money I’ve been able to travel, take dance classes in Colombia, and see my favorite artist in concert. Money has allowed me to experience life and for that, I am grateful.

Thanking my debt was a little difficult in the beginning. I’ve grown up with a lot of shame around debt, believing that debt is for people who are irresponsible with their money. People in debt go on shopping sprees and don’t think just charge. But my credit card debt didn’t accumulate because Calvin Klein was having a sale. I didn’t get into debt from buying all of my friends rounds at the bar. My credit cards helped pay for the root canal my insurance didn’t cover. Or when I got into a car accident, my credit cards helped me rent a car so I could continue to work. Of course, not every credit card purchase was the wisest decision, but thanking my debt was an act of forgiveness and acceptance.

Then, I made myself a physical wish list. With a normal budget, you list your income and expenses. What’s left over is your spending money. I essentially did this but in a more visual way. When I would save up a certain amount I would allow myself to buy one thing on my list. When I was able to cross off that new dress or new pair of shoes, it felt satisfying. Most importantly it felt guilt-free. This also helped me from impulsively buying something. If I wanted a particular item I would put it on the list and buy it when I was financially ready.

I wrote down the “what” and why” behind my spending.

This is one of my favorite journal techniques because it brought back the joy of money. It also helped me to shift my limited thinking. Whenever I received unexpected money I would add it to what I called a  “money miracle” list. These were simple things, like only having to pay $10 for a meal instead of $15 or receiving an unexpected discount on a purchase, or a client continuing their paid service with me.

When I wrote down the good things that happened with the money, I was more positive. I used to think money was evil, especially when I couldn’t afford something or when I had to pay more for things like taxes or unexpected expenses. My miracle list showed me that even though bad things happen, good things happen. too.

I came up with some money mantras.

Lastly, I wrote down money mantras to help improve my beliefs around money. Writing down phrases like, “I’m a money magnet” helps me stop thinking about money in terms of deficit.  Mantras helped me to stop focusing on my limited thinking about money.

All in all, my journaling continues to be a safe place for me to express how I feel about money. If I felt stressed about it, my journal is a shame-free place to express those emotions.

Kiersten is a traveling entrepreneur and coach who teaches women how to create their own businesses to live anywhere in the world.  In addition to coaching women on better money mindsets to earn their desired income.  You can follow her on Instagram or read her other published work here.