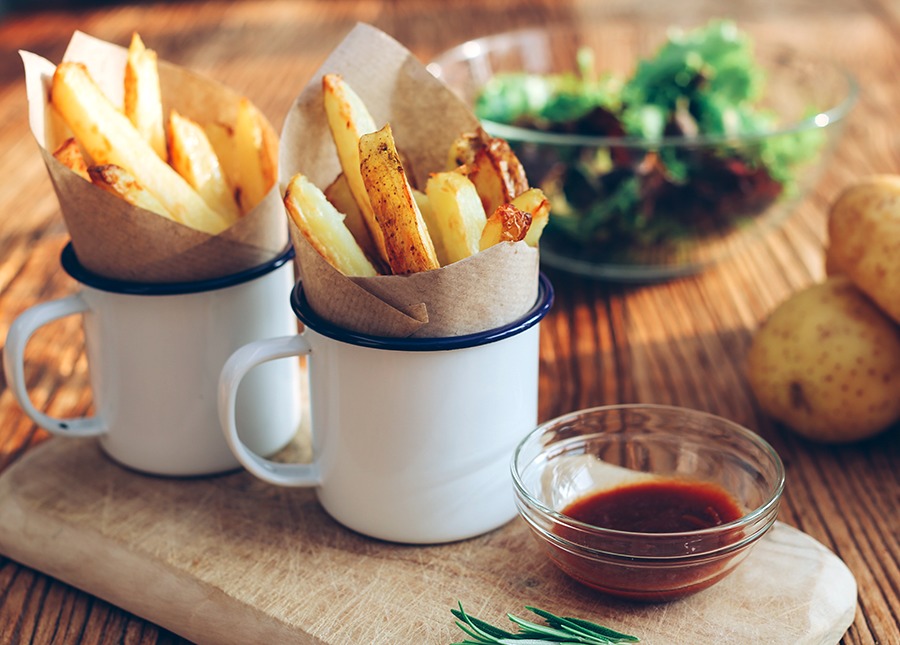 I’ve had several financial successes this year, including funding my emergency savings and sticking to a real budget for the first time. Well, most of one. As it turns out, my husband and I are terrible at keeping to a dining-out budget.

There’s only two of us, and we’re not eating at Michelin-star establishments. And yet our $300/month dining-out budget has gotten blown out of the water almost every month since June — often by $100 or more.

At first, I did a lot of self-shaming. “There’s perfectly good fresh food rotting in the fridge,” I’d say, or, “We have leftovers we need to eat.” I’d be furious with myself every time I threw away things that had gone moldy. Americans waste about a pound of food per day, and I was so embarrassed to be contributing to that statistic. Especially when I learned that over 13 million children in America live in food insecure homes. So many people go hungry every day, and here I was tossing out food I’d let go bad or hadn’t eaten just because I didn’t like it.

So I tried harder. I dove further into meal planning, tried to keep better track of what we had in the fridge and pantry, and started using our slow cooker to make weekend dinners.

This helped with our spending, but my myopic focus was driving me batty. I turned down fun weekend things because they interfered with my getting food prepped for the slow cooker. Spending a couple of days out of town over a holiday weekend became a nightmare scenario, with me trying to eat everything in the fridge before we left. I nearly burst into tears when produce I bought went bad in the day or two before I planned to use it in a specific dish.

Causing further frustration was the fact that I don’t enjoy cooking, especially after getting home from a long day of work. Most of the time, the idea of preparing food, cooking it, then washing dishes and cleaning up the kitchen afterward makes me want to scream. During the summer, I did my best to cook dinners every night and eat leftovers for lunch all week — and all it did was make me feel worse.

Living with generalized anxiety disorder means dealing with all kinds of curveballs, but I never imagined it would entail tweeting angrily at my supermarket about slimy asparagus. Then recently, while listening to an episode of the Her Money Matters podcast, host Jen Hemphill said something along these lines: “Budgeting isn’t about depriving yourself. It’s about knowing what’s coming in and going out so you can live the life you want.”

My brain stopped its merry march to insanity and went, “Huh, say what now?” At that point in my financial journey, this simple concept had never occurred to me. In my mind, budgeting meant saving for a house, retirement, or an emergency fund. But now someone was saying that budgeting could also involve spending?

That’s the lesson I’m trying to internalize for the rest of this year and beyond: being financially responsible does not mean depriving yourself. In fact, many “no shopping years” and extreme diets fall apart because people go too far. So when they fail, they fail big: instead of buying one outfit, they buy 10; instead of eating one doughnut, they eat a dozen. I’m not convinced that starving yourself of something is any better than glutting yourself on it. I’m trying to be more flexible with my budget, and telling myself that it’s okay to spend money the way I want to. These days, Friday dinners, Saturday lunches, and Sunday brunches are part of my husband’s and my normal routine. Going on these “dates” helps us stay connected, and keeps me from losing my mind over meal plans and a sink full of dirty dishes.

As the dining-out portion of my budget has flexed, I’ve found that other line items have slipped, too — mostly my credit card usage. My parents, especially my father, have always warned me to be very careful with my card. For most of the time I’ve had it, I’ve used it exclusively for putting gas in my car and doing online shopping for birthdays and Christmas. But in the last year, I’ve started using it more frequently to buy things I want: the occasional Stitch Fix, tickets to live shows, even a couple of mini-vacations. I’m not going crazy and squandering every last penny or going into debt, but I am learning that it’s okay to spend judiciously if it’s in pursuit of the life I want.

I’m fortunate enough to be financially stable, with money saved and enough coming in that I don’t have to decide between paying the water bill and ordering pizza. It’s time for me to stop behaving like I’m still where I was three years ago. And I’d never say “screw the budget” is a healthy perspective to have all the time — you should live within your means. But sometimes…it’s okay to screw the budget. You only have one life, and only so much time with the people you love. You don’t have to deprive yourself of something that contributes to improved mental/physical health or happiness simply because it doesn’t fit into your preconceived notions of what things “should be.”

Go out to dinner with your partner (or by yourself). Splurge on an outfit you know you’ll wear. Buy tickets to that thing you want to go to. Make your budget work for you and take you toward the life you want — not the other way around.