How Watching Gilmore Girls Gave Me A Terrible Understanding Of Money 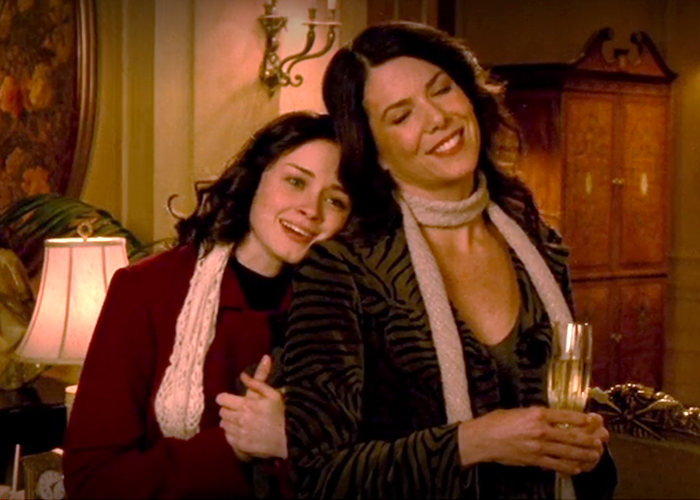 I’ll start this by making one thing very clear: I love Gilmore Girls. I remember seeing WB commercials for it when I was as young as 8, then finding my way back to it in my early teenage years, finally finding out what happened when the girl in the pretty blue dress got in trouble for falling asleep next to a boy in a dance studio. The DVD box sets are some of the only remnants of the time before endless streaming that I’ve held onto. I’m currently re-watching the entire show with my boyfriend, and seeing it through his fresh eyes has been an incredibly fun experience, even if it is filled with his endless eye-rolling at the characters’ sense of entitlement. I am excited for the Netflix reboot (coming this Friday!), because I am excited to watch some of my favorite characters in one of my favorite fictional towns exist again at the same time I do.

I’m also glad that it’s returning so that I can air my biggest grievance with a show I love so dearly: The way the main characters handle money is unrealistic as hell.

We don’t often veer into pop culture commentary-territory here at TFD, but for me, Gilmore Girls felt entirely personal. I identified with Rory in the way that I wanted to be her; I wanted to be a studious, beautiful bookworm who never had trouble getting cute-if-stalkery boys to ask her out on dates. I viewed Rory’s perfectionism (arguably somewhat eschewed in later seasons, what with yacht-stealing and mother-avoiding, though she comes out relatively unscathed by her own reckless decisions in a charming display of privilege, but that’s a rant for another time) as aspirational, but only in a way that made me daydream a lot, without actually inspiring me to work hard enough to get into an Ivy League school or the like. When I turned 16, 17, 18, and still didn’t have boys and opportunities falling at my feet, I felt like I’d been lied to. When I figured out most people couldn’t constantly be eating junk food with zero effect on their weight and complexion, I felt a strange sort of resentment towards this not-real person who gave me such unrealistic expectations.

The thing I notice most, upon re-watching the show over and over, is, of course, how the characters handle money. I’m not even talking about Richard and Emily, Lorelai’s parents who obviously come from a money background and lead upper-class lives. I mean the portrayals of their daughter and granddaughter, who are of much humbler means. (I’m not even going to get into how these characters can afford to live in this house on a single-parent income.)

The Gilmores are a very wealthy family from Hartford, a society (in the show) full of an old money mindset that Lorelai has very much come to resent. She’s the free spirit that ran away from home at 16, when she had a baby and decided she didn’t want anyone’s help raising her. She made her own way, finding work as a maid at the Independence Inn in Stars Hollow, a small town not too far away, but far enough to feel like there was plenty of distance from the old life she so desperately wanted nothing to do with. She worked her way up over many years, eventually becoming the manager, and later opening an inn of her own.

I always admired Lorelai’s scrappiness, and there are many parts of her and Rory’s lifestyle that are arguably very thrifty. The season where Lorelai is starting her own inn from the ground up is by far my favorite, as it’s full of the excitement of starting a new business and the added personal dramas that come along with it. However, it also introduced a side to the protagonists that I hadn’t seen before, or at least hadn’t noticed. At several points throughout the time that she’s starting this inn, all the while having very little income thanks to only the occasional catering client, Rory points out every instance where Lorelai is obviously trying to save money. She mocks her for couponing, as if there’s something inherently wrong with trying to save on grocery shopping. The way she approaches it is not with concern for Lorelai’s financial state, but with a tone that suggests actively trying to save money is somehow beneath them — something only desperate, un-chill people would do.

At another point in that season, rather than looking at her mother’s newfound frugality as something to mock, Rory seems at least genuinely concerned about her, which certainly settles my stomach. But to me, watching from a young age, it still felt like the notion of cutting back was not normal — that everyone should expect to be in a good financial situation at all times. Not only is this unrealistic, it’s dangerous to assume that you will always be well off and shouldn’t plan for harder times. Also, Rory’s main concern is that Lorelai is making food at home regularly and ordering less takeout. Starting a business, the way Lorelai is, is something that would financially limit a person, especially if she doesn’t have much coming in on the side.

And on that note, what the hell is with their food spending? If I recall correctly, there is an episode in season one where Lorelai spends $42 on junk food for one at-home movie night. One. And that doesn’t even include the pizza she orders later. Also, they somehow manage to eat at their local diner every single day, sometimes for more than one meal, and never, ever make their own coffee. Now, I’m sure Luke’s is relatively cheap (and it’s not like we ever see them pay for their meals), but even $1.10 on toast out is more than you’d spend on toast at home, and those small expenses add up. There’s also a sequence where, in the midst of window-shopping because they are too broke to tempt themselves by going into stores, the Gilmores treat themselves to a sampling of every single cuisine offered in the mall food court, referring to the practice as “smorgasbord,” implying that it’s something they do regularly. They balk at the idea of cooking at home, ever, and quite frankly, it made young, impressionable me feel like cooking for yourself wasn’t a normal thing to do.

Rory and Lorelai also plan a three-month backpacking trip around Europe for the summer after Rory graduates high school. I’m sure this was, in the show’s reality, something they had been saving up for years to do, but considering the timing — Lorelai had just put a down payment on her inn — it doesn’t seem super feasible. Not only was she taking off three months for a vacation, she was taking three months off when she already was without income, after her previous place of work burned down, and with plans to start an entirely new business.

Rory never even held a job during her high school years, other than supposedly working a few hours a week at Lorelai’s first inn (not that we ever see her doing that). My own parents wanted me to have fun in high school without being bogged down with an after-school job in addition to the activities I actually liked, but you better believe they insisted I had a job during summer breaks. The way Gilmore Girls portrayed it, spending three months gallivanting around Europe — without a concrete plan or reservations, mind you — was just something you could do. Of course, that is something some people can do, and cheaply, but I still find the details a little too murky to be believable.

I also personally think Lorelai and Rory hold each other back in this manner. They could encourage the other’s newfound (if fleeting) desire to cook at home, or eat healthier in general, rather than show skepticism at the first sign of personal growth. Yet when Lorelai has tomatoes and cheese in her fridge, there’s something totally wrong in Gilmore-land.

Maybe I’m giving this show too much credit. Maybe I should just accept that fiction isn’t reality, so I should just stop paying attention to characters’ saving habits (or lack thereof). After all, there are plenty of shows, books and movies that are surely going to give us unrealistic expectations if we let them. They don’t tend to make shows about people saving money, and I probably wouldn’t watch them even if they did. But Gilmore Girls just one example of many shows where the latent behaviors of the main characters — the everyday things they do that are background, rather than the sometimes-melodramatic ways they respond to plot devices — are so unlike how real middle-class people live, even though we’re supposed to think of these characters as real middle-class people.

I’m somewhat expecting this to incite a heated debate or two, because the Gilmore Girls fandom is passionate, to say the least. For me, it feels healthier to watch shows I love and have loved for years with a critical eye, because otherwise, I’d let myself believe that these fake universes are better than my own. But I have no problem keeping lunchmeat in my fridge, cutting coupons, and saving up for months for a trip that lasts a week, not three months, all the while watching — and loving — my fictional friends in Stars Hollow.