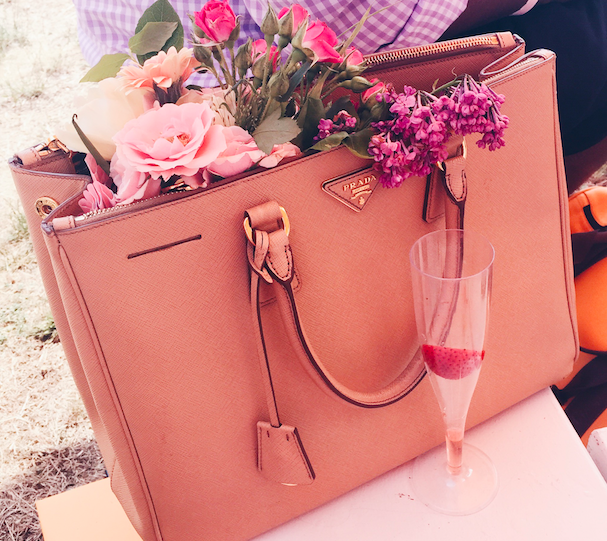 When I was a teenager, one of my absolute worst summer jobs was my stint as a receptionist at the Annapolis Yacht Club. Yes, there is such a thing as a “Yacht Club,” and it’s pretty much what you would expect. (Like a regular country club, but where everyone dick-measures with their giant, tacky boats.) It’s where rich, mostly older, white Republican men gather in Sperrys and polo shirts to hang out with their friends and colleagues, and mostly ignore their Lilly Pulitzer-clad wives. One of my favorite anecdotes from this place was the time they formed a committee called Y.A.C.H.T., which stood for “Yachtsmen Against Constant Help Turnover,” because all of the employees — particularly the female ones — kept quitting after a few months of being collectively shat on by the members. (It never dawned on them that referring to them openly as “the help” might be part of the problem.)

Anyway, it was about the hellhole you’d imagine, and after about six months of watching members drive home drunk in their Porsches while we could do nothing to stop them, I quit. (Or was fired, I genuinely don’t remember. Either way, I’d never call them for a recommendation.) I took a lot of things away from the experience, and most of them were bad, but I can’t lie — I have since had a niggling desire to live out their absolutely opulent lifestyle at least once, just because it seemed so outrageous. The way they lived life, the way they consumed and demanded and enjoyed themselves with no regard for others was, yes, terrible to have to work for, but was undeniably fascinating. I saw Bar Mitzvahs that cost six figures. I saw weddings with actual celebrities as the band. I saw 100-foot yachts holding summer kickoff parties that were sponsored by vodka brands, even though these people could have clearly afforded their own open bars. It was disgusting and over-the-top, but when you work, thanklessly, for these people, you can’t help but want to try a taste of it for yourself.

But I moved away from Annapolis, and the prevailing culture of boat-shoe WASPiness as aspiration, and I pretty much forgot about it. My time at the Club became a distant, amusing memory, and I started to totally switch my ideas of ‘classy’ or ‘aspirational’ as I lived in Paris, then New York. Aside from a trip to Annapolis for croquet this year, I live a largely un-preppy life, and particularly with my ~financial diet lifestyle~, do not aspire to such a level of pointless opulence in any way.

So when my friend Ella asked if I’d like to join her for the Veuve Clicquot Polo Match with NYMag, for whom I contribute sometimes, my first reaction was “Girl, do you even know my brand??” There is nothing more decidedly un-TFD than a polo match hosted by a champagne brand, particularly when littered with celebrities and buckets of branded swag. But if I’m being honest, it did feel like a time to really live out my lingering WASP fantasies from my time toiling at the Yacht Club. Who doesn’t, on some level, desire to be dolled up like a Princess and sent to a luxurious event for free? I thought of it as a chance to explore that elusive lifestyle for a day, as well as enjoy a good bottle of champers, which is always a favorite activity.

They dolled me up in a dress and hat, some fancy makeup I never would have thought to try myself, and sent me on my merry way along with Ella. We were assigned to the Rose Garden, which was basically the VIP area that came with a bunch of perks, as opposed to the WASP plebes who had to be in the general admission section. What did we get for being the chosen garden ones? A free bottle of Veuve rosé per person, unlimited free lobster rolls and other fancy sandwiches, nice chairs and tables, prime viewing for the match (which I did not understand), and fun little extras like a GIF photobooth and tons of free flowers everywhere. We also got the general privilege of being treated like royalty, instead of like a random in seersucker left to fend for themselves, like the general admission people. (They were definitely bougie themselves, don’t get me wrong, but not at the same level.) We met a guy on the walk back to the ferry who told us about the state of the port-a-potties over in general admission, which were your standard outdoor event fare, aka gross. Our port-a-potties were, no joke, nicer than most New York City apartments. They had two full-length mirrors, four stalls separated by full-length wooden doors, two sinks, and excellent lighting. I even snuck two pics for your voyeuristic pleasure: 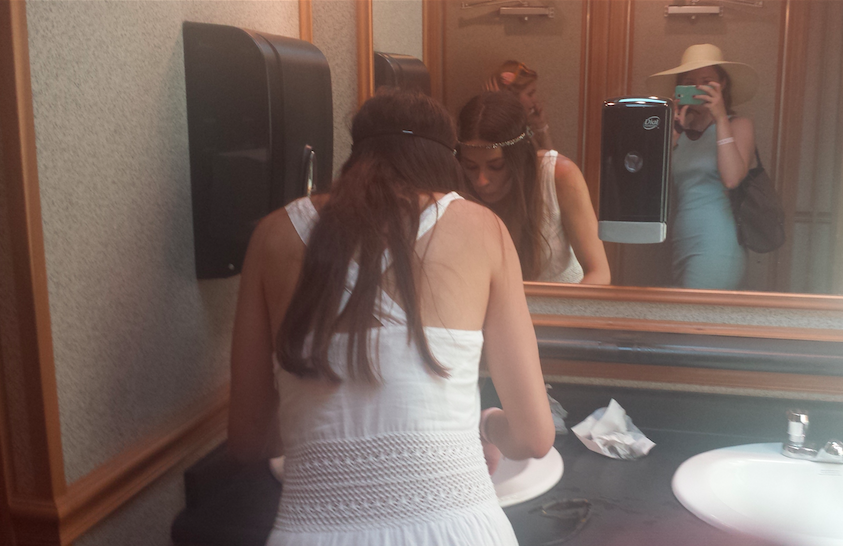 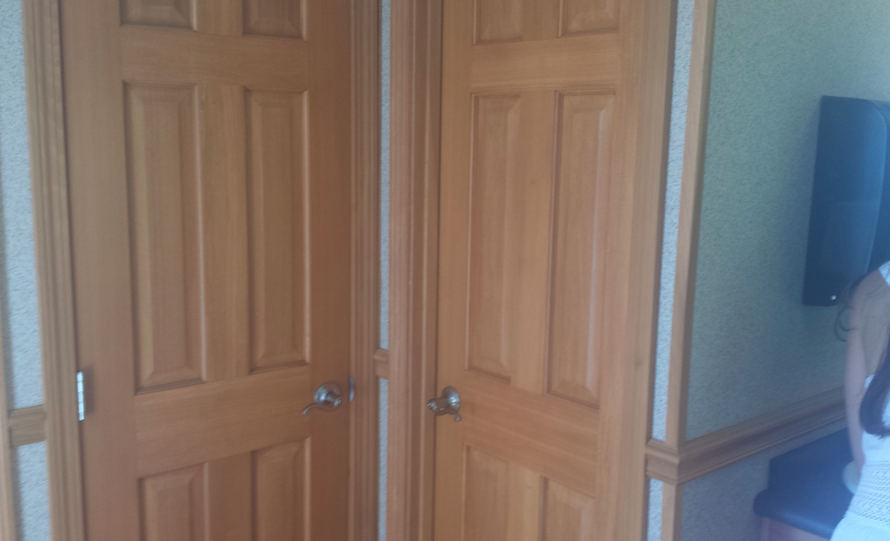 These pictures can’t do it justice, of course, but I was also trying not to creep out the other hand-washers by doing a full-fledged photoshoot of their backs. Point being, it was a Really Nice Fucking Bathroom.

To be in the Rose Garden, if you weren’t being sent there on behalf of someone, you paid 500 dollars. After talking to several polo-goers at or near our table, I gathered that this was the case for the majority of them. We were surrounded by a stylist, a businessman, a woman who owned a pharmacy on the Upper West Side, and two trust funders who were mostly complaining about school. It was a healthy little mix of people who had paid 500 dollars to enjoy fabulous port-a-potties and tons of free pink booze. For them, it was just another day, and they spent the afternoon enjoying themselves and talking superficially about how nice it all was, and what they do. A few cards and emails were exchanged, and maybe some meaningful connections were made. But it struck me that this sort of event was very normal for them, and they didn’t seem impressed by my wide-eyed yokel attitude. When I gushed about the bathrooms, or marveled at how you could have AS MANY FREE LOBSTER ROLLS AS YOU WANTED, they mostly just sighed. Who cares, this is how events are supposed to be.

And I won’t lie, it was a fun day. It was cool seeing the match, watching beautiful people swan around in their beautiful clothes, and getting buzzed off of endless free rosé champagne. I was surrounded by flowers, and enjoyed a nice round of giant jenga with a cool staffer named Christian as Manhattan towered behind us in the distance. (We were on Governor’s Island.) It was a beautiful way to spend a day, no doubt. And it was, finally, a taste of the kind of luxury those Yacht Clubbers are deeply accustomed to, where you don’t need to ask for anything, and even the outside toilets are the best version of them you’ve ever seen. Everything just kind of floats by nicely, and everyone is in a good mood, if a little bored. The whole thing had sort of an anesthetized vibe to it, but pleasantly so. If someone were to let me do it for free, I’d totally do it again, because why not?

But I’d never pay money to do it, because it certainly didn’t bring more joy than, say, a night out at a dive bar with some good friends and maybe some good pizza. The surroundings were beautiful, sure, but there is only so much luxury you can experience before it becomes numbing, and I guarantee it was much more so for the people around me, the people who experience something like this every other weekend.

It made me think about the wedding-industrial complex, which we talk about a lot here, because I think a lot of the reason we are inclined to go “all out” on our Big Day is because we think all of these beautiful, luxurious extras lend some real magic to the day. We get to wear our special dress, and be surrounded by expensive flowers and bottles of champagne and perfect place settings and crystal-filled chandeliers. We eat perfectly-plated food and have a big band playing our favorite songs, and everyone is in their Sunday best. When this is not our norm, we really believe — and I can include myself in this statement — that there is something unquantifiably special about it, that it will take our day truly into the next level.

But as a writer who’s achieved a very modest amount of ~internet fame~, I’ve had the luxury of attending several fancy events in my time, where I get my makeup and hair done and have photos taken and wear a fancy dress. This was the most opulent of those, but I’ve done it a few times. And each time, I’m more convinced that the last thing I’d like for my wedding is something filled with that type of thing. I want something as simple and intimate as possible, without all of the extras that we think are supposed to add that je ne sais quoi, because they don’t. I can honestly say, having done this several times, that aspiring to fanciness is a waste of time and emotion. And if you want to recreate it for yourself one day just to try it, fine. Why not? It’s your money. But if you have 500 bucks to blow, I’d put it on a vacation with a friend or partner way before I’d put it on a super fancy day out.

I got to be that rich snob for a day, and it was fun. It was a weird experience that I’m glad to have had, if only because it’s officially rid me of any of my lingering 19-year-old curiosity about the Yacht Club. I can say that I’ve had my fancy day in the sun, dressed to the nines in expensive clothes and surrounded by luxurious beauty. And when I left, I couldn’t wait for the next day, when I would get to curl up on the couch with my boyfriend and a bowl of our favorite noodles to watch Game of Thrones. I promise you, that was much more fun.