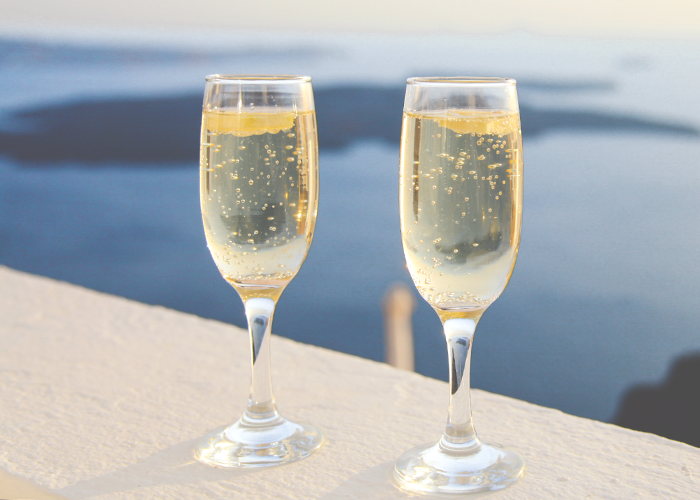 One of my friends works in a really fancy restaurant, like much fancier than any restaurant I’ve ever stepped foot in. He told me they have this vintage wine list, and one of these vintage wines costs a thousand dollars a bottle. The restaurant only had two bottles, because I’m assuming that its exclusivity has more than a little something to do with such a steep price tag. Anyway, over the summer, apparently some guy came in with his family and they bought both of them.

One time I was working for a caterer, providing food and drinks for a private party at this jewelry store in the city. The private party wasn’t really a party; the jeweler had invited all of these mega rich people to come and look at their exclusive collection of watches. There were maybe half a dozen guests. I’m pretty sure the wait staff outnumbered the clients by a factor of two to one.

And I remember standing there in my ridiculous catering tuxedo, trailing behind these ultra wealthy shoppers, making sure they had a little snack or a drink whenever they wanted. Super, super rich people have a way of carrying about their super, super rich lives in front of all of the people clinging to them, serving them, making sure that they’re constantly happy, as if they’re totally alone, as if everyone else is some sort of a decoration.

I saw one guy buy a watch that night for something like seventy thousand dollars. And he was putting on this ridiculous show to the salesperson, like, “Oh, I know I shouldn’t. I shouldn’t! But I just love watches. I just can’t stop buying watches!” and then his wife chimed in, “It’s true! He has so many watches. He can’t stop collecting watches!”

I thought to myself right there how absurd, how disgusting this whole situation was. Here we are, organic finite beings on this cooling rock of molten lava orbiting around the sun, itself orbiting around the center of the galaxy, all of us completely insignificant specks in the cosmos, all of us getting older ever day, going about our lives hoping that it all might mean something, that it all might make sense in some sort of a cosmic plan. And here I was, myself orbiting this guy with my tray of champagne glasses, him orbiting these glass cases displaying finely crafted metal instruments, metal instruments used to tick-tock, to count away the one thing that binds us all together. This metal, it’s going to outlast all of us. And how much money gets spent protecting this metal, these watches, hiring security firms to guard the watches, professionals to maintain the watches, keep them spotless?

On my way out of that building a bunch of security guys went through my backpack, I don’t know why, making sure I didn’t steal anything I guess. As if I could have. Do they really think I’m that clever? Or that stupid? That whole place was locked down like a fortress. I imagined the final pat-down just a friendly little reminder of my role in this world.

The gig lasted an hour, tops. But the same guys who pay thousands of dollars for a bottle of wine, who pay tens of thousands of dollars for a watch, they’re not going to hire some cheap-o catering company. And so all of us hardworking caterers get paid a five-hour minimum for every shift. It’s some of the easiest money I could ever hope to make for doing pretty close to no actual work at all. So I look at it from this perspective and I’m reminded that my existence is unimaginably more comfortable than the majority of humans who have ever lived and suffered and died on this planet. Am I any better than any of these rich people I’m deriding? We’re all chasing the same dollar, inching, orbiting as close as we can toward wealth, toward riches, toward happiness.

I’m not getting at anything, not really. I’m just wondering, when you take a sip of thousand dollar wine, does any part of you really believe that it’s worth it? Because while I’m sure you poured it into a decanter and let it breathe for exactly the amount of time the sommelier instructed, and while you took a big whiff before you tilted that glass back, tried to imagine all of those vanilla and oak and other subtle, almost hidden aromas, I guarantee you that when that first drop hit your tongue, there had to have been a little part of you that was disappointed, that refused to stay silent, that piped up in the back of your head, That’s it? It’s good, but really? That’s it? But I just paid a thousand dollars. It’s just a glass of wine. It’s just a watch. You’re just some dude with way too much money to even begin to know what to do with any of it.