Why I Don’t Think Anyone “Deserves” An Engagement Ring 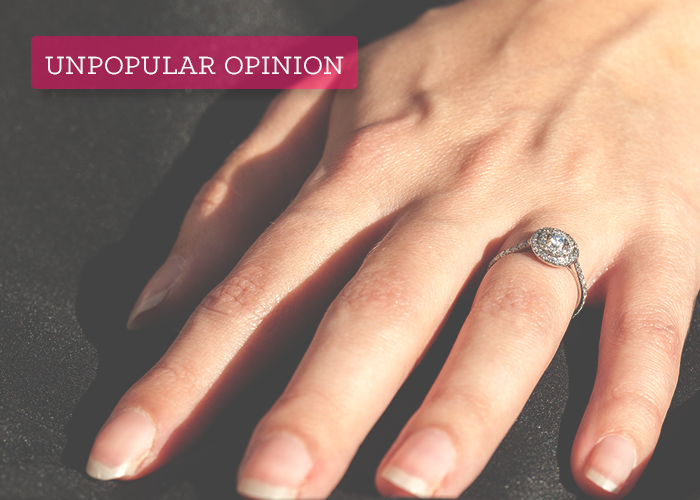 I felt compelled to write this as a response to the piece “9 Women On How Much They Would Want Someone To Spend On An Engagement Ring” because I was taken aback by two of the women’s responses. One, who said she thought she “deserved” an expensive ring, and the other who said she wanted to spend 25k on rings, while her parents paid for her wedding. It really struck me, the whole idea of waiting and expecting others to provide you with the things that make you happy, instead of taking care of yourself and making yourself responsible for your own happiness. Everybody deserves a chance for love, respect, the sheer craziness of telling a person that you want to share the adventure of life with them and grow old together. But nobody “deserves” or is entitled to a diamond ring.

I am from Lima, Peru and come from a conservative, religious family. I was the type of kid who questioned everything growing up. And one of the first questions I had was this: why do women have to take their husband’s name, and not the other way around? (Of course, that in part may have come from the fact that I have two hyphenated last names. My family names are miles long!) As a kid, I wondered why my father sometimes received strange letters from the United States describing him as a Mrs? (It took me some time to realize these were actually for my mother, which seemed profoundly absurd to me.) Here’s another question I had as a kid: why did people have big, fancy Catholic weddings in church, if they never even went to mass on Sundays?

Fast-forwarding a few years, to when I was 18 and I realized that I was completely ambivalent about having children. When my first niece was born in 2009, I became an aunt at the age of 30. Seeing how my sister dealt with having a child and caring for another human life further convinced me that motherhood was not for me. If you’re going to take on that responsibility, you must want it with all of your heart. She definitely did. I was not sure.

Once I realized I didn’t need to have children, all my preconceived notions and ideas about marriage started flying out of the window. This was a huge cause for worry for my traditional South American parents. They could not believe that their daughter was interested in grad school in the U.S., but not in diamond rings.

I really did question everything. Growing up, my mother handed me down her old copies of The Feminine Mystique and Silent Spring. And I’m still questioning. I did not, and do not, feel comfortable with the expected and traditional notions of being a woman (including marriage and kids), but when I was realizing this, I still had no idea what I wanted to do, and who I wanted to be. All I knew is that I didn’t want to be married at 25 with a baby on the way. Not because I don’t think that’s an amazing path, just because I think it’s not for me.

Betty Rubble (from “The Flintstones”) fell in love with Billy Quest’s white-haired uncle, and Barney Rubble lured Betty back by buying her a diamond the size of a hamster. That is quite a child-appropriate way to indicate a harsh truth for me: diamonds are all about a man’s purchasing power, and about impressing a woman through material things.

An expensive diamond ring, to me, basically says that you are a successful man who can afford to spend money on a luxury item that has to be constantly guarded. I am bothered by the culture of expensive diamond rings because they become a walking advertisement of your future’s husband’s wealth, or potential wealth. Take also the name change issue – the only way you can possibly know that a man is married is by the presence of a wedding ring, while the woman’s status as married is made visible through the name change, the engagement ring, and the change of the term Miss to Mrs.

I believe many of these rituals made sense at one point – the engagement was almost a legal promise with weight, and women could keep the diamond ring if the man broke the engagement. At a time when most women could not have careers (or their options and earning potential were extremely limited), and they could not have independent bank accounts, buy property on their own, or when they were essentially considered their husband’s property, the ring made sense. It showed that the man was promising to be a good provider. But we don’t have those limitations anymore.

I do not judge other women who want a nice diamond as an engagement ring. It is a beautiful, tangible symbol that they are getting married, and I can understand wanting to show it off to their friends and family – especially when the ring has some special meaning or value. I also understand the whole romantic allure of the “proposal ritual” – the getting down on one knee, and offering a gift as a token of your commitment. A lot of wedding rituals have been stripped of their original (often patriarchy-based or sexist) meanings and functions, and been given new significance – the white dress, the cake, the bouquet throw, and I support that reappropriation.

I also find it awesome that people subvert old traditions and rituals, and create new ones that may end up becoming new traditions. (My younger sister defied tradition by opting not to have a Church wedding, a decision which raised many eyebrows. After a few months, after half-convincing himself that his youngest daughter was not a heathen, and that he had not failed in his duty as a good Catholic, my parents flew to England with a suitcase full of peruvian decorations and food, and attended my sister’s wedding, a lovely English-Peruvian celebration.) My father ended up peeling potatoes for the appetizers on the morning of the wedding! My sister also did not get a diamond ring, and her husband engraved both their wedding bands with an adorable message.

What I do not understand, however, and where I take issue, is when women and men demand the continuity of a ritual just because it has always been done that way, even if it makes no sense in their current lives or for their personal preferences. I reject the notion that we must continue doing things the way those around us insist they must be done, or that we should need the same symbols of material affection that made sense when a marriage was more transactional. Rituals aren’t meant to be followed without meaning. And when they are surrounded by a sense of entitlement, I absolutely do not support them.

A self-described archaeologist of ancient and modern cities, as well as a writer, Rosabella lived and worked for a three years in Cambridge, MA, while obtaining a Master’s degree from the Harvard Design School and working in urban planning, heritage and garden conservation. She is now back in Lima, Peru where she works as a consultant and teacher.