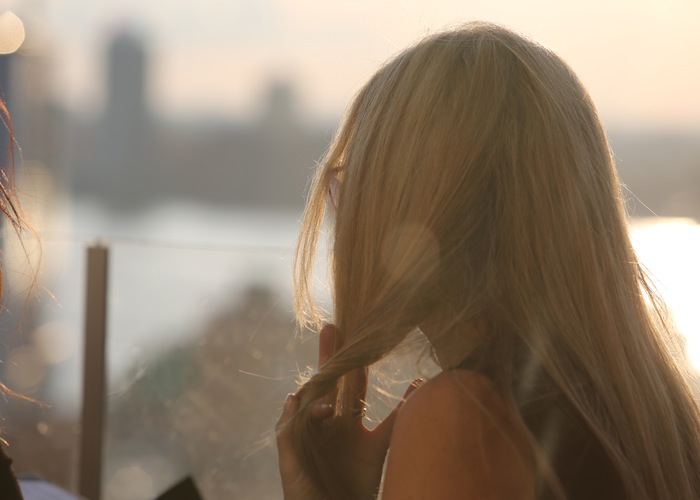 I was taught to be a career girl. My mother is a career woman, my brother works within her company, and leaving business at the office was never a thing in my house. (I was the one who tried to push for a “no phones at the table” mandate, and was overruled.) Even now, when I go home to visit, everyone works a 12-hour day. Growing up, I also lived with my father half of the time, and he worked from home, which provided more balance. He was able to pick us up from school, and then would continue working for a few hours after, which I think is ideal. The point is, the value of “work” was instilled in me early on, but I also learned very quickly that I wanted more of a balance at home.

I may not have had “balance” as an example growing up, and I saw my mother blow off countless dates in favor of working. But I still honestly believe that having a dream job, career goals, and a relationship is possible.

However, when you’re starting out, and making your ~dreams~ happen, it presents more than a few relationship challenges. I’ve been thinking about this for at least two years, because I’ve been in a relationship for about the same amount of time as I’ve been growing my career. And while being open about relationship versus career challenges isn’t easy, I’d rather acknowledge the challenges now, than push the debate aside altogether.

I wouldn’t say I live to work, by any means, but my goal is to be someone who works hard, gets a lot out of my work, and is able to help other people do the same. My boyfriend is the way same way. We are both driven, and uncompromising, and though we’re incredibly supportive of each other, it’s the “uncompromising” part that concerns me.

It’s not that I don’t think there’s a time and a place for compromise, but now’s not that time for me. Most partnerships excel because, when you come to a crossroad, one or both parties are willing to make a sacrifice. They’re willing to step up and say, “I love my job, or my apartment, or my city, but I love you more.” And I wouldn’t say that right now. Neither would my boyfriend.

This is partially because we’re both fairly young and are focused on building our careers. I don’t think that means our relationship won’t work, but it means that, at some points, our relationship won’t be the main priority, which can be a huge gamble. For example, my boyfriend has an LA-centric career, but I don’t. Currently, I wouldn’t ask him to move for me, and he wouldn’t ask me to stay in LA for him. I see this as a great thing, but it’s still a bracing reality check in terms of where our priorities are.

It’s difficult to admit when your relationship is and isn’t your first priority. Sometimes I get scared that compromising in your 20s is like apartment hunting in a big city. I’ve always heard (probably from Sex and the City) that you can pick two of these three things: a good price, the location you want, or a safe neighborhood. What if that’s the case here? You can pick two: the location you want, your dream job, or your relationship. Which do you choose?

As of now, I have to admit that what I want for myself is more of a priority than a relationship. I hear how that sounds, and my instinct is to feel bad about it, but I don’t want to feel guilty for putting myself, and my own aspirations, first in my 20s. Even if you do have to pick two of three, I think there’s a way to make your dream job and your relationship compatible. Yes, there are examples in my life that suggest otherwise, but I’m also surrounded by couples, both in my personal and professional life, in which both people do what they love and facilitate a relationship. I think every one of those couples would tell you it’s brutally hard at times, but completely worthwhile.