Why I’ll Never Be An Effortless Health Food Yoga Babe 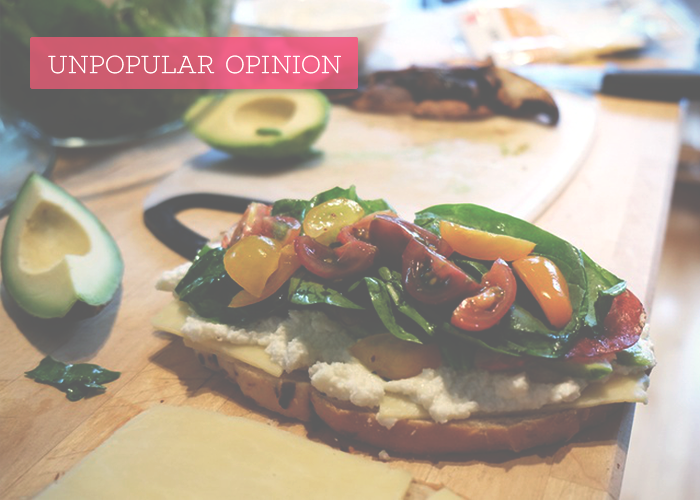 I love farmer’s markets. I love the feeling of handing cash to someone I know grew the vibrantly red tomatoes. I love the samples, tasting the golden raspberries, and watching little kids pop an extra one in their mouth while their parents aren’t looking. Going to the farmer’s market by myself is one of my favorite LA rituals, because the people-watching is all the entertainment I’ll ever need. It’s 100% a Bougie Saturday Experience. There’s an Intelligensia down the street that sells cold brew for $4.50, and the main road is lined with tiny, intimate brunch boutiques that sell tantalizing eggs benedict, with your choice of avocado, or salmon, because God-for-fucking-bid we just eat a piece of Canadian bacon.

I don’t hate on the idea of the farmer’s market for being overpriced, or because there’s more than one Kombucha vendor. I politely avoid the stand with the $35+ sundresses, treat myself to a small container of berries, and keep going. I’m not opposed to all ~bougie produce shopping experiences~, nor am I against eating healthy. I’m all for a balanced diet, and as a casualty of living in Southern California, end up eating more quinoa salad than I otherwise would. But, more and more, I find the health food store phenomenon grating. Their healthiness aura draws you in by making you feel like you’re one step closer to fixing your life, as soon as you enter.

I’m generally afraid of the Los Angeles health food store scene. I have this image of pristine shops in West Hollywood, sitting pleasantly across the street from artisan dog food stores, boasting their fresh pressed juices. The men and women gliding out of those sliding doors are dressed down, perfectly tanned, and have their neatly-tucked reusable bags in one hand, and their toy pooches in the other. And while, yes, this is partially exaggeration and my inferiority complex talking, I swear the average health food store patron exudes this radiant quality that convinces me, for a split second, that the $10 produce is honestly doing wonders for their skin.

Those stores should cut the beautiful yoga babes a check because they’re doing more advertising than any sales rep ever could. I sometimes feel like walking around LA is just like being in one, massive experiential advertising campaign, where every Lululemon-clad woman is subtlety trying to prove to me that if I press one more beet into my juice, my legs will be more toned.

I never bothered to question whether my diet was healthy enough before coming to LA. Maybe I was initially drawn to these health food stores because I felt like my own eating habits were being challenged. (“Oh, you had broccoli with dinner? I had a protein shake with kale for breakfast, and an avo smoothie for lunch.”) But the closer I get to these stores, and the more I browsed, the more I realized the downside. People come for the novelty items — the Kombucha, gluten-free salad dressing, vegan cookies — and stay for the aspirational lifestyle. And that’s how we end up spending so much on the same potatoes we could get for 99 cents at the Von’s across the street.

Recently, I tried doing my entire shopping for the week at a health food store. The ambiance made me feel like I was #buyinglocal, but they were still selling the exact same Chiquita Bananas I’d buy anywhere else. It took an hour longer than any other shopping trip would have taken because I spent a ridiculous amount of time poring over the price tags on shredded cheese. I couldn’t get past the price mark up I found throughout the store, nor could I understand why people kept going back to be ripped off. To a certain extent, isn’t that a little like going back to a boyfriend who keeps using your credit card?

I usually buy about $40 worth of groceries to get me through the week. I bought essentially the same things I always do, but it ended up costing me almost $30 more. And what did that extra money go toward? It certainly didn’t help me reach a Healthy Shopping Nirvana that improved my sex life, and made my skin more even.

I learned that doing your entire shopping at one of these stores is simply unnecessary. I wouldn’t say you need to avoid them altogether, because I understand that certain stores sell a few ingredients you can’t find elsewhere, and it’s fortunate to have a store that will accommodate your dietary restrictions. However, I personally advocate for doing multiple shopping trips, if you have to stop at a health food store. Grab your novelty products there, and then get the hell out. Don’t stay for the aspirational potatoes, or the pesticide-free kale.

I no longer envy the health food faithfuls. The illusion I’d built up for these shoppers had elevated the wonders of the actual food in my head. But at the end of the day, most of these stores aren’t delivering anything I couldn’t find for a better price two miles away. The health food craze clearly appeals to my food-related insecurities, and by packaging their $5 spinach as a clean-eating, tan-glistening, yoga-fueling lifestyle, it’s almost enough to make me play right into their hands. But as long as I’m critically comparing the health food prices to the average grocery equivalent, I know that succumbing to the SoCal plight is just another aspiration with an inflated price tag.

I don’t disagree with the fact that things of better quality should cost more money. I understand the value of buying a well-made shoe over Forever 21 flats. But, in my opinion, what some health food stores are doing by selling the same block of cheese I buy at any other store, for $4 more, is a lot like a fancy boutique selling Forever 21 crop tops at a 300% markup.