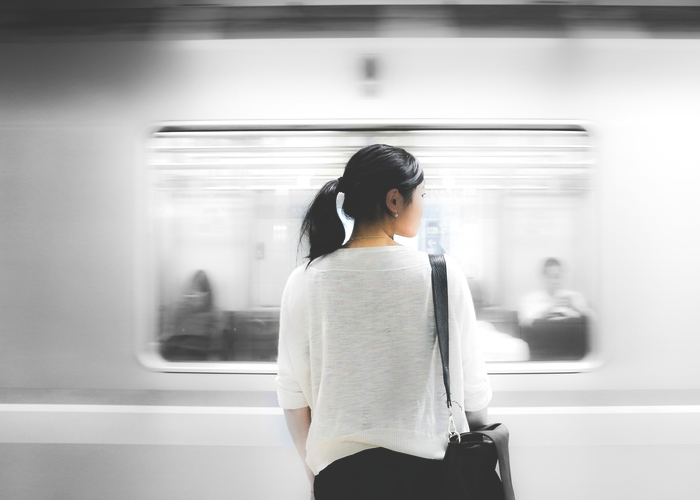 For a while now, my good friend has been telling me about struggles she’s facing with her boss (a high-ranking executive), that are based almost entirely on the fact that she is a woman. While she recently quit, it’s still upsetting to hear because though I’m, of course, aware that this degree of blatant sexism happens, I’ve honestly never experienced it firsthand. I haven’t always been professionally happy, but even when I’ve been overworked and miserable, I’ve never been discriminated against for my gender (or race) by any of my colleagues, male or female. For me, the only gender disparity I’ve seen up-close is working jobs where everyone I work with is female, but nearly everyone at the executive level is male.

With this in mind, I asked ten women who work in male-dominated fields (or at predominantly male offices) to share the challenges they’ve faced in their careers:

1. “Working in a male-dominated field, especially as one of the youngest 20-somethings in the office, means I now have the older brothers I always wanted. But that situation comes with its own set of challenges. While they are all, on a personal level, wonderful and look out for me, and want me to bring boys around so they can ‘approve’ of them at happy hour, that ‘little sister’ feel doesn’t always fit well in the workplace. They are often taken aback when I defend a strong viewpoint, or ask to be included in a meeting my male colleagues would never have to ask to be a part of. I’m learning that, if I’m ever going to move up and be considered a true ‘equal,’ I’ll have to be more assertive and straightforward, even if that means ditching my typical ‘nice girl’ attitude.” — Jamie, Public Affairs

2. “The biggest challenge for me was having the confidence to complete my degree. Throughout my degree program, many of my male classmates had inflated confidence levels that I found very intimidating. So many of the smart, capable female friends I made in the program dropped out because they felt they weren’t good enough.

In the field, I have worked in government positions, both civic and federal, where the gender gap is much smaller and management is very supportive of women in tech. I feel very fortunate that the ‘computer science bro’ culture that I experienced in school hasn’t followed me to the workplace.” — Ella, Computer Science/Government

3. “I often noticed that it was more acceptable for the men leading meetings to crack jokes, make funny comments about non-work related matters, etc. When women did it, however, it seemed less socially acceptable, and it felt like other people wouldn’t take the female executives as seriously, if she let her guard down. There were also the obvious, and much more common, remarks about what I looked like. If I did my hair nicely one day, wore high heels, or a smart-looking blazer with a dress, my male coworkers would always comment on it, which isn’t flat-out rude, but is a difficult thing to handle gracefully, especially when it makes you feel awkward.

I felt like there was a very distinct, yet intangible culture of bro-y-ness, where they would all go out to happy hours on Thursday or Friday nights and get wasted. It was mostly men who went, so a lot of the women wouldn’t go, and that’s where a lot of that out-of-the-office bonding, networking, and ‘team’ building would go on. When the women are left out of that, it creates a natural disadvantage for them to get ahead at the office.” — Erin, Advertising

3. “Getting a B.Sc. and a PhD in the sciences is, by nature, full of challenges. I’ll share the worst comments I’ve ever gotten: A male classmate honestly once said, ‘You’d be a great engineer, too bad you are pretty, nobody will take you seriously.’ And a professor once said to me, ‘I don’t even understand why a woman would need to take more than two weeks of maternity leave.’ I got the best career advice from my dad (who is a chemical engineer): ‘It’s great that you want to be an engineer, but darling, be aware it’s not going to be enough for you to be good, you have to be the best.'” — Iris, Sciences/Engineering

4. “I work in the engineering field and, needless to say, the ratio of women-to-men is very low. The biggest challenge I’ve faced was figuring out how to deal with potentially offensive jokes made by the men in my field. I am not easily offended, and I tend to easily brush off a lot of things, but I realized that the situation was worth approaching because even if I wasn’t offended, someone else easily could be. It was a challenge to try to figure out how to approach these issues, but I’ve found that most men I’ve worked with simply aren’t aware of the damage they might cause, and a simple reminder does the trick.” — Diana, Engineering

6. “The fact that I’m a woman in a male-dominated field is always in the back of my mind, and I guess (in some ways) I modify my behavior to fit in a little more. I’m not being fake, or a different person, but I definitely second-guess myself sometimes when it comes to overtly feminine behavior. There have been very few instances where a male coworker has made an inappropriate joke or comment and I’m still learning how to approach those situations. At my very first job out of university, my boss once called me ‘babe.’ He immediately apologized, and I was so taken aback by it (and so new to the workforce) that I smiled and, almost cheerfully, said it was no big deal. I immediately regretted how I reacted, especially because it wasn’t the last time he let a ‘babe’ slip.” — AnnaMaria, Physical Therapy

7. “I am a small business owner, a woman, and a minority, and I have been made to feel many times like men assume they can walk all over me. Sometimes I feel like my gender makes them assume that my company is less of a threat, as if I’m competition they don’t need to worry about because I’m female. That is incredibly frustrating to deal with when you’re the sole-proprietor of a business putting in 18 hour work days.” — Mary, Business Owner

8. “One thing I’ve noticed in the film industry is that younger generations don’t care as much if you’re male, female, or what race you are, they’re more focused on the work you do. I have found, though, that women even a generation above me have had to fight just to gain basic respect. Older generations had to set boundaries, and risked their jobs because they didn’t want to be seen in a sexual way, and just wanted to be appreciated for the work they did. I’m in film locations, specifically in a union that’s almost entirely men, and men will still say things like, ‘Girls belong in the office.’ Pretty frequently I find that I am spending too much time trying to fend off flirtation, but by not engaging, and continuously working hard, I’ve gained a ton of respect.”  — Karen, Location Scouting

9. “I have been very fortunate not to encounter any significant challenges as a result of being female. As a matter of fact, in many instances, being female has been a benefit, not a hindrance. For example, my current position involves a significant amount of one-on-one communication with property owners, often giving them bad news. I have found that, generally speaking, members of the public are sometimes more trusting of women, which has allowed me to establish excellent working relationships with these property owners. My supervisors have recognized this quality and routinely give me additional responsibilities and recognition as a result. I honestly do not mind being appreciated for what some might consider a more ‘feminine’ quality, and am proud to use it to my advantage.” — Shannon, Engineering/Goverment

10. “Honestly, I think the biggest challenge, for me, is finding a strong female mentor in my field. I’m an assistant editor and I work with a lot of male editors, who I consider to be enormously talented and who I really look up to. But, I find myself wishing that I had more women in my office to learn from. Since the editors in my office are freelance, they are constantly rotating in and out on a weekly basis. When you add the fact that only three or four, out of probably 25 different editors that get booked, are women, it doesn’t give me a lot of opportunity to meet a potential mentor.

One thing that I’m really proud of myself for is how successful I’ve been at negotiating a raise for myself. It can be intimidating to ask for a raise in the first place, and to intentionally ask for more than you actually think you should be paid as a negotiating tactic is not my natural instinct at all. But, I’ve been so determined that I did exactly that the last two times I asked for a raise, and it worked! Both times my boss came back to me with an even higher number than I had expected him to, meeting me halfway or higher. It has absolutely empowered me, and it’s also something I probably wouldn’t have been as likely to do if I wasn’t so aware of how male-dominated my field is.” — Grace, Film Editing