11 People On Exactly How Much They Budget For Holiday Gifting 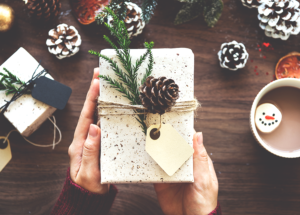 A few days ago, I found myself ever-so-eloquently Google searching “How much to spend on Christmas gifts total.”

Weird that I’d even have to Google that, but I have my reasons. I moved out of my parents’ house on New Year’s Day 2017, which means that this holiday season is the very first I’ve spent On My Own as a certified grown-up who can afford to live her own life in her own home, and therefore, can afford to make the holidays special for other people rather than sitting back like the child she always was growing up and allowing the magic to happen around her.

This is not to say that I didn’t spend my entire life gifting my friends and family (or at least my parents, brother, grandparents, and immediate close friends). But the gifts I was able to give to my loved ones were small; I’d buy a t-shirt for my dad, a bottle of affordably-priced perfume for my mom, a candle for my grandparents, a sweater for my brother — nothing compared to what my parents were showering me with all my life (toys as a child, ~cool~ clothes from hip stores in my teenage years, etc).

I realize now that I’m earning full-time money (and subsequently feel able to participate full-time in the holiday gifting season) how expensive it all must have been. There is even some commercial floating around on TV (I can’t remember what for, but I’ve seen it more than once this season) where a woman is asked what her holiday budget is, and she says “$500,” which sounded to me at first like the most amount of money ever to spend on one holiday.

But after my Google search, that figure doesn’t seem crazy at all — in fact, it is definitely on the lower-end of what most Americans will spend on the holidays. This article from last year said that “In 2016, it is expected that the average American will be spending $929 on gifts for friends and loved ones — surpassing $900 for the first time since 2006.”

I haven’t stumbled upon any figures predicting what we’ll be spending this year, but I’m assuming it is the same, if not higher. Obviously, there are people who spend way more and way less than that, but the thought that the average last year was expected to be close to a thousand dollars got me wondering what actual people in my everyday life budgeted for their holiday gifting, and what they actually usually ended up spending. (I figure this information will be especially valuable to me as I create my budget this week, and approach black Friday this upcoming weekend — shopping season has commenced.)

I asked 11 people exactly how much they budget for holiday gifting — here is what they had to say.

1. “I spend well over a thousand. I don’t technically ‘budget,’ but I usually plan to spend about a thousand on Christmas gifts and almost always hit that or go even a tiny bit over. — Kendra

2. “My family consists of me, my brother and his wife, my parents, my grandparents, my boyfriend, his father, his grandma, and his sister. I try to keep it at a tight $500, but this year I budgeted $550 and I don’t plan to go a bit over it.” — Alex

3. “I have only three people to buy for, but I budgeted $1000. I just like to get really nice gifts for people; giving gifts is one of my favorite things, and I do alright with money so I’m incredibly lucky to be able to spoil the people I love. — Lizzie

4. “I have two parents, a significant other, a best friend, and a few not-as-close friends that I still want to get at least a small gift for. I’ll probably not spend more than $250 total. I like to spend about $100 on my friends, my boyfriend and best friend will probably get about $50 each worth of gifts in whatever form (my boyfriend and I just bought a condo and have decided not to go crazy on gifts for each other), and probably the other 50 will be split among a bunch of friends and I’ll get them all something small and cute, probably paired with some sort of Christmas-y baked good. — Allison

6. “I don’t have a budget for Christmas — I should. It is terrible, I totally overspend. I just find stuff I want to buy and when I add it up in the end it is way too much.” — Anna

7. “My girlfriend and I live alone, far from family, and don’t go visit for the holidays because it is just incredibly difficult due to the circumstances of our jobs, but we will send each of our families a gift, probably a gift basket in the $80-100 range, then buy for each other, and I’d estimate we’ll spend about $300 each on our gifts for each other. We try to set a budget and then, unromantic as it sounds, kind of just send each other links to things we want to buy and get them for each other as gifts.” — Tyler

8. “There are five kids in my family — my son, who is an infant and won’t be receiving many gifts past a few festive onesies, my niece and nephew who are six-year-old twins, and two other nieces who are 9 and 10 years old, respectively. As my siblings and I have grown and started having families of our own, we don’t really buy for each other. We’ll all go in on one gift for my parents (probably $50 each), then probably for our spouses (my husband and I decided to go no-gift for each other because we’re planning a trip in February and wanted to save, but we’ll probably buy each other $20 worth of little stocking stuffers or candy), and then buy for the kids. We have a pretty good $50-75 limit per-kid in the family, which seems like a lot I guess but it feels budget-friendly enough. So I don’t know, $400 total?” — Maria

9. “I’ve never set a ‘budget’ for Christmas, but I know I don’t typically spend more than $50 on any single person, and usually that number is closer to $20.” — Josh

10. “I’m a homemade-gifts person. I bake a few types of cookies in huge batches, buy cute boxes and ribbons (probably $20 total for all the packaging) and write cards and send them out to everyone. For the more-special people (parents, grandparents, in-laws) I’ll add a bottle of wine in the $15-20 range to the cookie package. Money is tight and I see nothing wrong with homemade gifts, especially because we’re not kids who want toys any more; we’re grown-ups who can buy the stuff we want/need as they come up.” — Kayla

11. “I won’t spend more than $200 for sure. I never have. However, not making excuses, but I’m in college and don’t even work full-time yet, so I don’t think my friends/family expect any lavish gifts from me. Something simple that I can buy at the mall on black Friday will probably end up under the tree for each of my loved ones, but I won’t spend a fortune.” — Victoria