12 Books That Have Kept Us Motivated & Inspired Post-Election 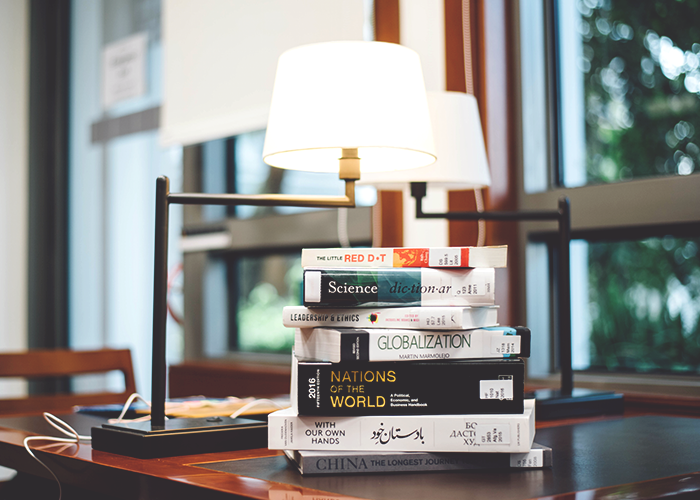 It’s no secret that we here at TFD have been feeling politically (and emotionally) distraught ever since the presidential election last November. It’s hard not to, but it’s also hopeful to see how many people there are taking action — especially those who maybe weren’t so involved previously (myself included). But while we should all be doing our part as active citizens, we have to take care of ourselves, too. Reading a little every day (or even every week) is not just a fun, inexpensive activity (especially if you use the library), it’s great for your mental health, and may even help you sleep better. Plus, there’s nothing that encourages empathy for others more than reading about their experiences — something we all could use more of these days. Here are our personal book recommendations that have been keeping us motivated and inspired ever since the election. Some concern a political or socioeconomic topic to help keep you informed, and others are personally motivating and provide perspective, helping us stay grounded for the times when start to feel down about the state of the world.

1. The New Jim Crow: Mass Incarceration in the Age of Colorblindness

“If you’ve been supportive of Black Lives Matter, but want to more fully understand the issues, this book is a must. It goes through the entire history of racism in America’s criminal justice system from the colonial era up to the War on Drugs, showing how politicians on both sides deliberately exploited fears and bigotry to achieve their own agendas. Which is deeply disturbing and maddening, but motivating in that it inspires action. It’s also packed with statistics and true stories, giving you an arsenal of conversational ammo for those moments when you find yourself talking to someone who doesn’t believe systemic racism is real.” — Annie

“I recently re-read this book, which is my favorite book of all time, for two reasons: one, there is no warm-blanket feeling quite like re-reading a book you have read and loved a thousand times, and two, this children’s book is one that feels shockingly rich and full of lessons as an adult. Not only is it at a language level that you would never see in a children’s book today (it was originally published in 1961, when I assume English education was much sturdier), it also inspires the same levels of wonder and curiosity 20 years after I initially read it. It’s a book about the love of learning new things, and that idea never feels more urgent than at a time when the very basics of knowledge and fact feel under siege.” — Chelsea

3. The Unbanking of America: How the New Middle Class Survives

“I am still in the middle of reading this, so I’ll have a fully-formed opinion in a few days’ time. So far, I find it to be completely eye-opening; the author, Lisa Servon, started working as a cashier at a Rite Check in the South Bronx to understand why more and more Americans have stopped relying on banks, and then wrote this book about it. We think that there are right and wrong ways to handle our money, but those ‘right’ ways — like banking, which only seems to impose more fees the less money you have — are sometimes only helpful for people who already have money. It doesn’t leave a good taste in regard to how banks operate, but it’s also helpful to read and understand the ‘bad’ money decisions that some people make.” — Holly

“So, I know that I’m probably years behind the curve here, but I just recently read my first Zadie Smith novel (and plowed through it in a week!). I was unfamiliar with Smith’s work, so diving into her writing style, which I found to be unfussy yet mesmerizing, was truly wonderful. Reading this book each night made me forget whatever went on during the day, and I loved coming home to this welcomed distraction. This New York Times book review talks about how the consistent themes often explored in Smith’s work are on display here, saying, ‘This novel addresses many themes that have animated Ms. Smith’s work since the start: the competing claims that family, cultural heritage and politics exert on identity; how personal imperatives are shaped (or not) by public events; the mix of emulation, resentment and rebellion that inform children’s attitudes toward their parents.’ Reading her work makes me feel inclined to be more introspective, to talk less and listen more, and to reflect on and analyze the choices and circumstances that have shaped my life until now, with wonder and curiosity. A really good read.” — Lauren

5. Do What You Love: And Other Lies About Success and Happiness

“This book, by fantastic author (and Twitter presence) Miya Tokumitsu, is a concise exploration of the nefarious forces behind the feel-good, Pinteresty capitalism of “do what you love” rhetoric. Miya explores the dangers of a culture that turns labor into a primary source of personal and spiritual fulfillment, and reminds us that no matter how beautiful the package, this language ultimately only convinces us that we should be working more for less. In a post-Trump era, it feels more urgent than ever to critique the failures of liberalism as much as the far-right, and starting with the backwards attitudes Americans still hold around labor feels like a good place to start.” — Chelsea

“As a communication student who has taken courses in political communication, media, and propaganda specifically, I’ve studied this book a lot, and it is something I definitely like to keep on my shelf because it feels relevant, now more than maybe ever. Also, a selling point: this book has a ton of information and offers a really interesting perspective, but it is also really brief and concise and easily readable, which is more important than anything when it comes to educating people who don’t have a ton of time. It is important to know that even though we’re all busy, there are ways to make time to educate yourself, to be politically and socially active, and to do your part to do whatever you can to fight for a better future.” — Mary

“I read a lot of ~women’s~ memoirs, and this one by Lindy West, which I read last summer, is by far my favorite. First of all, she is hilarious, which makes getting your heart broken a thousand different ways thanks to her stories a little easier to deal with. She writes about everything from her abortion, to falling in love with her husband at comedy venues, to the time an internet troll actually apologized to her. Plus, her perspective as a fat woman (her preferred adjective), in both the harassment she’s received and the body-positive perspective she has adopted, is something I think anyone would benefit from reading. I learned/laughed/cried a lot, and so did everyone in my circle — this book has gotten passed around so much, it’s looking a little dingy. I love it.” — Holly

8. 10% Happier: How I Tamed the Voice in My Head, Reduced Stress Without Losing My Edge, and Found Self-Help That Actually Works — A True Story

“This book sounds like self-help, but it’s really more of a memoir about a funny news anchor who goes from a drugged-out nut case to an ardent believer in meditation and mindfulness. What makes it more interesting than your average spiritual memoir is that his career gave him access to some of the most famous and influential self-help gurus, from Deepak Chopra to Ekhart Tolle, who he met in person and critiques candidly. He’s also very down to earth, describing his adventures at a silent meditation retreat with unflattering detail. It’s a good reminder that mindfulness and Buddhism don’t have to be rarefied, intimidating practices for only the super-zen (or super-privileged) and that inner peace can prevent a lot of needless striving.” — Annie

9. Molly on the Range: Recipes and Stories from An Unlikely Life on a Farm

“I’ve been reading the blog called My Name Is Yeh for years, and when I heard that Molly was turning her online blog into a physical book, I was excited as hell to get my hands on a copy. I started reading through this book right around Christmas time (not too long after hearing the election results), and it was a wonderful way to inject some much-needed positivity and light heartedness into my life at the end of the day. Molly’s recipes are easy-to-follow, straightforward, and photographed beautifully in her small and cozy kitchen, which is tucked into a remote corner of North Dakota. She provides a fair amount of personal stories in each chapter, which are hilarious, honest, and personal. If you like reading cookbooks that are equal parts approachable, familiar feeling, and informative — this one is for you!” — Lauren

10. Between the World and Me

“Ta-Nehisi Coates’ series of essays from a few years ago is a heartbreaking look at the state of racism in America, a country with foundations in slavery and mass incarceration. It feels especially personal, since each essay is written as a letter to his son. He writes about his own life experiences, such as being a student at Howard University, as well as the recent murders of Michael Brown and Trayvon Martin. I’d recommend it to anyone as an education is crazy-good writing and a summation of the current climate. It’s not a light read, but it is short — I wasn’t able to put it down, and found myself crying on the subway more than once.” — Holly

11. The Little Book of Hygge: The Danish Way to Live Well

“Because even though every annoying YouTuber is obsessed with it mostly because they can afford to dedicate their lives to comfort, it also is just a really soothing read and helps you kind of indulge in little things that make you happy, and make your life work for you in a way that is comfy and nice. Which feels kind of necessary right now, because everything is gently spiraling out of control. Also, love how it is basically the opposite of the minimalist crap. It basically says ‘have a life that makes you happy and comfortable, even if that life involves owning stuff’ and I’m like ‘yassss.'” — Mary

12. Neither Here nor There: Travels in Europe

“My favorite travel book, Bill Bryson’s Neither Here Nor There, follows the author through several months of travel through Eastern and Western Europe just after the fall of the Soviet Union. It’s an incredibly funny book, and one that makes you long to hop on the next flight anywhere, but following such a witty and lighthearted guide through what are ultimately several countries in the throes of brutal economic and social recovery reminds me of one thing in particular: people have gone through much worse than I have ever known, and they have come out the other side.” — Chelsea