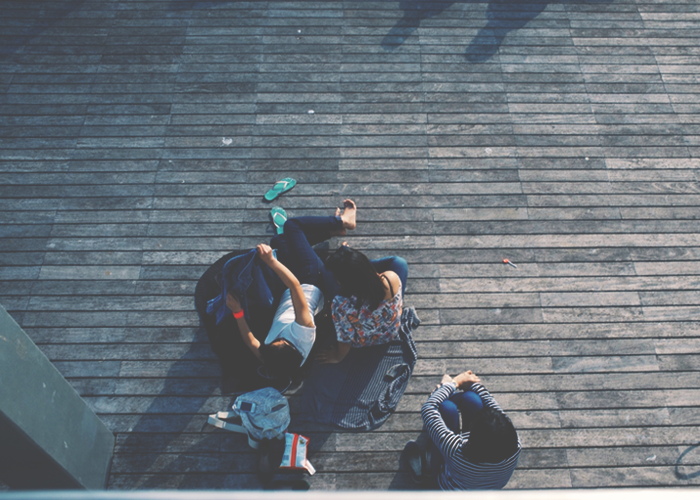 1. I would’ve considered moving home after college. After graduation, I lived in my college town for about nine months. At the time, I didn’t even acknowledge moving home as an option because I’d lived away from home during almost every summer in college. It seemed like taking too much of a step backward, so I refused to have the option on my radar. Looking back, I’m incredibly jealous of everyone who saved money on rent after graduation by moving home, and wish I’d entertained the idea.

2. I would’ve been less hard on myself. I was constantly putting pressure on myself to do better than I was doing and figure out what my step was. I spent an unnecessary amount of time comparing myself to everyone else and I was anxious that everything I did fell short of what I was supposed to be doing.

3. I would’ve appreciated the fact that I got to volunteer, because once you’re on the 9-5 grind that is a rarity. While living in my college town, I worked three jobs. One of them was volunteer work at the Cancer Resource Center, which is a place I’d volunteered all through college and wasn’t ready to leave. I worked at their office, and the local hospital once a week, where I would help out in the chemo and radiation labs making sure everyone had what they needed. Once you enter the work force, start your first 9-5, realize it’s a 9-7, you don’t get to spend two days a week volunteering anymore, and I wish I’d savored it.

4. I would’ve been more patient with my parents. Because they were being extraordinarily patient with me, and I was busy finding their opinions frustrating as all hell.

5. I would’ve stopped assuming that my ~real life~ couldn’t start until I had a job in my chosen industry. I would’ve stopped discounting the time that I spent living in my college town, working at a winery, volunteering, and waiting tables at a local bar. I honestly loved that time in my life, but in the moment, spent a lot of time feeling bad about it.

6. I would’ve been less jealous of all my friends with “real jobs.” Once I actually got one of those assistant-what-have-you jobs everyone else had landed, I learned all the downfalls of them. And while I don’t deny that my office experience was important, I don’t think it trumped any of my other work experience. And it didn’t have the promised UpWArd MobiLiTy, because I wouldn’t have wanted to move up in my role there.

7. I would’ve stopped thinking that I needed someone else to move somewhere new with me. Moving somewhere alone always seems daunting, even when there are friends waiting for you wherever you’re moving. I wish I would’ve understood that I didn’t need anyone else to weigh in on the decision, I just needed to decide on a place that was best for me, and move.

8. I would’ve taken more time to move (when I finally moved to a big city). I got a job in LA and had to be out there for my start date exactly 5 days later. I could’ve pushed back on that, and didn’t, either because I was too timid or because I wanted to be out there to start my nEw LiFe as soon as possible. Either way, moving across my country in 5 days was an upsetting way to use my entire savings account.

9. I would’ve taken the time to understand the relationship between a savings and checking account. I was so eager to save every penny of my money, that I never left enough money in my checking account and over drafted too many times in my first year out of college. It’s not a great way to spend $35 dollars.

10. I would’ve kept my side hustle going, even after I took a 9-5. Right after college, I used to babysit my former professor’s 4-year-old for extra cash. But once I moved and started the office grind, I took no interest in picking up an extra babysitting gig here or there. Wrong move. I’m now more than 2 years out of college, work full-time, and would welcome the chance to babysit or walk someone’s dog on a Saturday afternoon.

11. I would’ve proofread my cover letters. Even if no one read them, they deserved that second round of proofing.

12. I would’ve stopped trying to rationalize every decision I’ve ever made to people. The constant need to apologize for myself (even unprovoked and for no apparent reason) is something I still struggle with.

13. I would’ve opened up to my coworkers and entry-level peers more and sooner than I did about my job situation. I was upset, overworked and working to a goal I had absolutely no interest in. But I was also keeping all this to myself, which probably made it more frustrating.

14. In every work situation, I would’ve considered whether I wanted my boss’ job. Because that is the best litmus test, I’ve found, to determine whether or not you’re on the right path.

15. I would’ve stopped wasting so much time panicking. I think it’s good to take something seriously and realize that you’re making important decisions. But it’s not healthy to be giving yourself constant stomach aches because you’re replaying everything that could go wrong in your head. I wouldn’t have let myself off the hook completely, or been carefree about my future, but I would’ve tried to learn to temper my anxieties sooner.