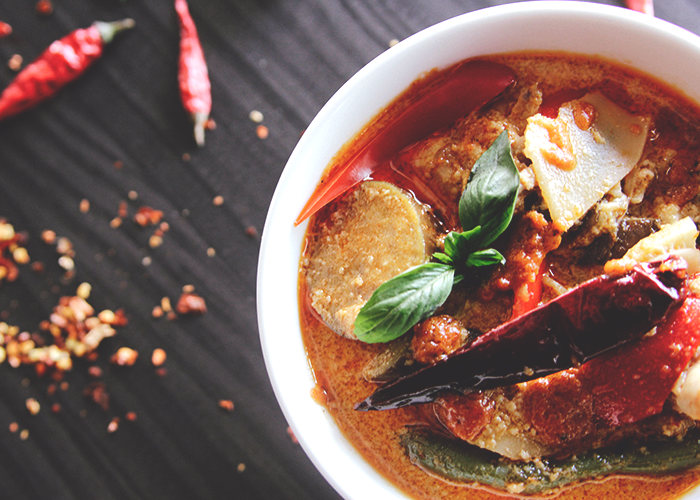 There are two types of people who order takeout: people who have a craving for a certain type of special takeout food, and people who are hungry af but don’t really feel like cooking.

I am often both of those people at once. I love food, and I love cooking it too, but in my laziest and hungriest hour, I become extremely tempted to order Pad Thai and call it a day.

To remedy this, I decided to keep a running file of easy-to-replicate recipes for my favorite comfort-food takeout dishes. I try my best to refer to this list (okay, Pinterest board) of recipes when I feel myself gearing up to ask Siri to find sushi near me. It works (most of the time), and I feel like a genius each time I cook one of my takeout favorites in a creative, healthy way that only come out to a couple bucks per serving. So here are my top four that I refer to the most. (Psst — I might be eating #2 right now.)

I know my takeout-taste isn’t exactly sophisticated, but I’m a basic bitch who loves Chipotle. However, it actually feels kind of expensive for the quality (which is pretty low, tbh, however delicious), and I also have a lot of questions for the chain after that whole food poisoning situation they had a year or two ago. Mexican food in general is my absolute favorite, and something I crave all the time –- so much so that I refuse to live in a home where there aren’t tortilla chips and salsa on-hand at all times. So when the burrito bowl craving hits, this is a go-to recipe to make something close to the real thing. This chicken is delicious, and can be served in a burrito, bowl, or any other way you fancy. I prefer it in bowl-form, with some veggies, beans, and rice. Bonus: guac doesn’t cost extra when you’re making it from scratch with the avocado collection I know you already have.

Okay, so these aren’t exactly a luxurious breakfast treat, but I’m 22, and after the more-than-occasional night of partying, I get the realest cravings for greasy breakfast sandwiches. Sandwiches like this are, in general, actually pretty affordable. But I love this recipe anyway, because it makes them even more affordable, and more convenient. It only costs a couple bucks for a bag of English muffins, a carton of eggs, some cheese, and meat (if desired – I usually prefer to go without it). These are easily made in a bulk batch and frozen to be heated up on busy mornings when you’re running out the door. I love anything that gets a delicious breakfast in my belly without me having to resort to a McDonald’s drive-thru.

I know I can’t be the only one who gets sudden, all-consuming cravings for Chinese food. It is one of those weird things that gets into my head and I can’t forget about until I get Chinese food inside of me. It is rough, too, because ordering Chinese takeout is actually so expensive, and pretty terrible for you. In an attempt to make a slightly-less-salty and way-less-expensive version of a favorite dish –- fried rice –- I found this recipe. It is so good, I even made it for my boyfriend on Valentine’s day. I personally chose to cut the sugar out of the recipe, and I thought it tasted just fine without it. If you’re careful about your sugar intake, give it a shot –- it doesn’t seem to make a difference, because the rice was still amazing.

I could probably eat Indian food every night of the week. I seriously love it all so much although my boyfriend actually hates it, so we eat it approximately never –- boooo. For that reason alone, I have a hard time spending money on Indian takeout. I obviously am not going to a restaurant where he won’t eat with me, and if I’m going to shell out the cash to buy takeout food and bring it home, I want to do it from somewhere we both like. So, if I want to eat any Indian food, I’d much rather prepare it myself with ingredients I have on-hand, then savor the leftovers by myself for many days after. I discovered this recipe after messing around with too many flavorless jarred sauce

that cost $10 for one use, Amy’s organic frozen meals (which actually taste pretty good, but a little pricey for the amount of food you get), and also a very sad Lean Cuisine which I immediately regretted. This recipe will actually cost you a little bit up-front if you don’t already have a killer spice

collection, but if you do, it is a pretty simple and classic recipe that yields a shit-ton of food, so you’ll have leftovers to snack on for days.