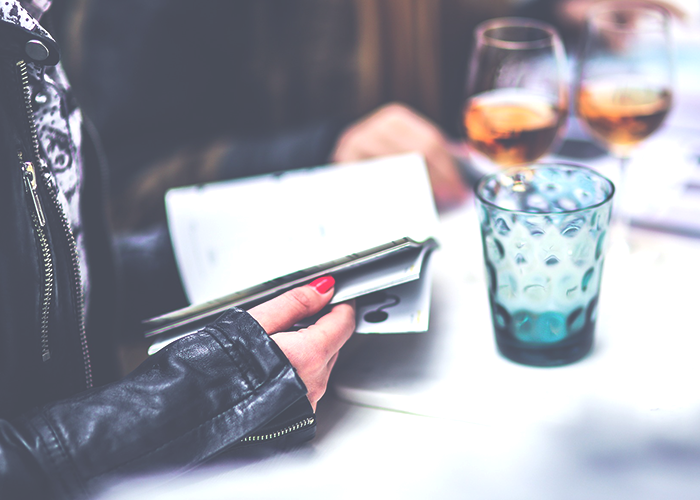 As I’ve mentioned before, right in the middle of my college career, I dropped out. It wasn’t permanent – I only ended up taking a year off – but it was still completely life-altering. And not because I traveled or “found myself” (because I certainly did neither of those things), but because I learned a shit ton about what I actually might want from life. I learned a lot of very specific skills from working various jobs and testing out a lot of new hobbies and activities, but the most important things I learned during my time off were really about myself, and my future. Sounds pretty corny, right?

But the thing is, when I made the decision to drop my school schedule, I had no real plan. I hardly even had a desire to drop out. I was doing okay in my classes, but I was in a major I didn’t really care for. I had just broken up with my on-campus boyfriend, and didn’t feel like seeing him around and trying to convince him I was ~totally fine~ while I was clearly flailing, academically, romantically, and otherwise. Most of the reasons I dropped out were personal reasons that, if I had addressed properly, probably could have been solved in ways that didn’t have me falling behind in my college career, and spending thousands of dollars on a yoga teacher training program when I decided on a whim that it was “my calling”.

But taking that time off – making those mistakes, losing the money, making more money, and generally just beginning to get some sort of grasp on what kind of life I’d like to live post-school – has made me a better worker, a better student, and a better person.

I learned a lot of different things during this time, but these were the most important pieces of dropout wisdom I took with me once I returned to school a year later.

1. It is okay to have no idea what’s going to happen.

When I stopped going to school, I felt deeply insecure about the fact that I had no picture of what I wanted my life to look like. The foreseeable future and the entirely un-seeable future were both question marks, and I didn’t know how to explain that to anybody. I didn’t even know how to explain that to myself. I felt uncomfortable with the fact that I had made such a huge decision to drop out of school, especially because I did it without even having a small plan. I felt insecure about the emptiness of my future. But the thing is, when you’ve got a year of nothingness in front of your face, like a blank word document, and you stare at it long enough, you’ll eventually start to fill it up with something. I ended up signing up for a yoga teacher training, and taking a job nannying full-time for a little girl who is one of the best friends I’ve ever known in life. I’m a planner in nearly every sense of the word, but letting my life figure itself out for once was more liberating than anything I’ve ever done. I know am definitely saying this from a place of great privilege, because although I was working full-time, I was also still 19 and living with my parents, so I carried almost no financial burden. However, the fact that I somehow navigated through my school and career roles for the first time in my life while simultaneously discoverin something I was truly passionate about gave me hope that someday, when I’m without a safety net, I’ll be able to figure it out then as well.

2. It is okay to change your mind.

I said a lot of things definitively during my time off from school, mostly because I felt like I had a lot to prove to people. I wanted people to know I had a plan, or at least a dream. However, I wish I held my tongue a little bit and didn’t say “I’m definitely doing this,” or “I’m definitely happier this way,” before I had really had time to decide if those statements were true. I wanted everyone to know I was totally fine and had it all figured out. I told people I was “soOoOoOo much happier!!!” since I dropped out, when the reality of the situation was that I still felt totally lost. I told people how I’d “found myself” in yoga, and never felt more fulfilled than I did when I began working as a full-time nanny, even though both of those things grew old for me quickly. My credibility was kind of ruined two months later, when I told all of those same people how I was feeling like a burnt-out mom at my job, and kind of already itching to get back to school. I learned that it is okay to change your mind a lot, and you don’t have to justify or explain it to every single person each time you do. Your decisions are yours – that’s it.

3. It is okay to simultaneously regret a decision itself, but not actually regret making it.

I was so proud of myself for finding enough ~enlightenment~ or whatever to drop out of school and stick it to the man by becoming a yoga teacher. LOL, look how that worked out. I sometimes do regret my decision to leave school for that year – it put me behind in my studies, and didn’t really bring me much further emotionally than I wish it had. (Truthfully, I wish I’d taken a year off before I started school, but this is another topic.) Even though I don’t think I’d take the year off if I had the chance to do it all over again, I am still kind of glad I made that terrible decision. It taught me a lot about what I wanted – and more importantly, it taught me about what I didn’t want. My future is still pretty open-ended, but I did figure out what passions of mine were best kept as hobbies, and which things I actually wanted to pursue as a possible career. I also learned something I’d never realized before – I really value my education. Before my year off, I definitely treated school like a chore, or an obstacle on my way to the future. Now, going to class and learning something new is probably my favorite thing to do with my time. I realized that sometimes in the working world, life gets so busy you hardly have time to learn – I want to soak up every second I have left of being surrounded by professors willing to answer any question I have about the world. I’m definitely grateful that my time off changed my perspective in that way.

4. It is okay to just slow down and think.

I put really important parts of my life on pause because I was so panicked about finding myself and planning my future. If I had consulted a few trusted and certified Grown Ups in my life before withdrawing from the university and signing up for my yoga training so quickly, I might have gotten the advice I really needed: slow the heck down. It sounds so corny, but I really do need to remind myself often that I’m not in a race to figure my life out before the person next to me. I definitely have a competitive streak, and I also tend to lean on the Type-A side of things, so I find myself constantly stressed about having everything perfectly and properly planned. This stress only increases as I watch my friends and peers accomplish things so gracefully and effortlessly around me. Instead of acting on frantic, ill-conceived plans to temporarily trick people around me into thinking I had some sort of future plans (i.e. becoming a guru-level yoga instructor, eventually opening some sort of green juice bar with my rock-climbing husband and our kids, River and Wheat Thin), I should have just been honest with myself and everyone else, and shrugged my shoulders when I was asked about my major, or my career plans, or any of that other stuff that made me feel so uncomfortable in my skin. If I had been able to accept that this shit is all a long learning process, I might have been able to calm down and slow down long enough to actually start figuring it all out, instead of getting distracted by all of my attempts to sugar-coat my confusion.

For me, a lot of anxiety surrounded the fact that I was in school with no real future path, and no real idea of what I even wanted my life to look like — I just wanted to push through it all as quickly as I could so I could just be there already and see how it all worked out. It is hard to decide whether or not a decision was a good one when it hasn’t been fully realized yet – but dropping out and taking that year to explore what life would be like post-school really helped me understand where I was heading: nowhere. Nowhere in particular, at that point in time, at least. And for the first time, I’m okay with that. I’ll find yoga, or nannying, or writing, or some other job I like to do, and be okay. I’m almost certain I’ll be okay.