4 Things That Allowed Me To Lose 20 Pounds, No Fancy Gym Or Green Juice Required 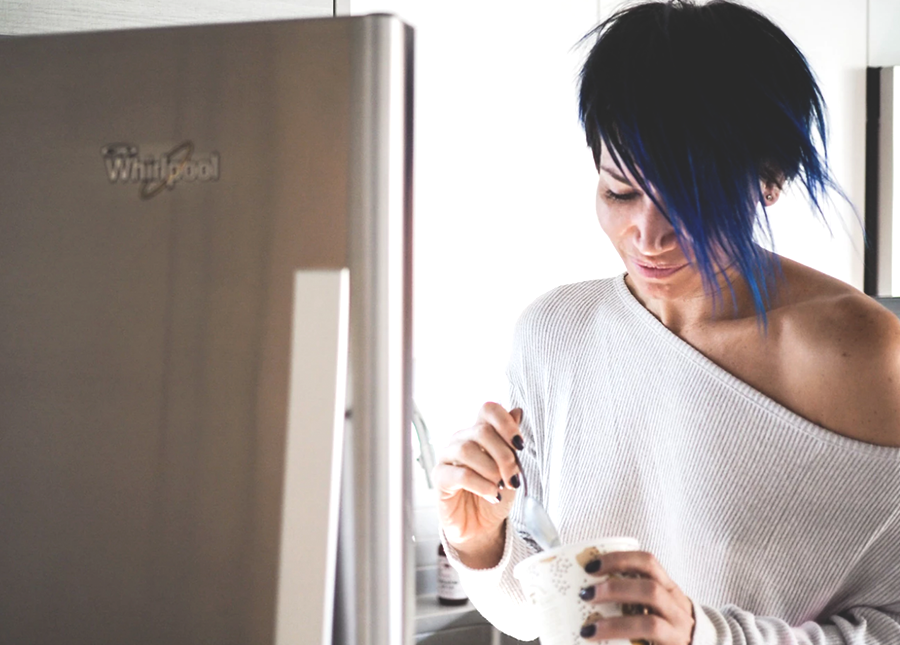 Back in September of 2017, I made a very unexpected move from Southeast Ohio to New Orleans. After graduating from an elite journalism school a few months prior, I landed my first job. It was in social media at (what was supposed to be) one of the coolest small companies to work for, and I was pretty happy and excited about it. My months of job rejection letters had finally come to an end and (apparently) somebody had finally chosen to believe in me. However, as happy as I was, I definitely did not look or feel my best.

My days studying journalism in Ohio before I moved were largely spent managing employees at a dining hall on campus. The biggest perk of this job was the free all-you-can-eat meals, and on average, I would consume way more than my body’s 2,000-calorie-a-day needs. As you might assume, I gained a little bit of weight. To make matters even worse, the New Orleans job I’d just started turned out to be a “bad fit” for my creative thinking skills. (Sure, it was in social media, but this particular job was more about optimization and numbers than it was about writing or creating content. Which are the things I’m best at.) Every day at this job was stressful, and I would cope by munching away at all the free office snacks.

Soon after leaving this job, I decided it was time to do something about my waistline. I started slowly by walking around my neighborhood during the daytime, then running, and then monitoring what I ate. However, I discovered a couple months later that I wasn’t going about weight loss in the best way. Mardi Gras had just ended, and I was pretty sick from standing outside so much and sharing other people’s drinks. When I went to the doctor to get my medicines for recovery, I had to get weighed. I was stunned that my BMI actually was in the “overweight” range.

Somewhere in that time, I managed to become a part-time content creator at a different small marketing agency in town. While the company was really amazing, it ended up paying me less than my last job did. (I am not complaining about this at all — I’ll take a job that’s better for my mental sanity and skills over a competitive salary any day!) As expected, I did not have the money needed to join a gym and live off of green juice. Now as I write this, my BMI is in the “healthy” range, and I’ve built a lot of endurance and muscle. Even better, I’m at my high school weight! Here are four things I did to lose weight on a tight budget.

No, this is not a sponsored post! I actually did get ClassPass, and it was one of the best financial decisions I’ve made to date. Going to a gym where I can’t afford a trainer and don’t understand how to work most equipment just doesn’t work for me the same way as going to a class does. Classes — whether barre, yoga, spin, or pilates — motivate me more. I have to keep up with the class, follow the instructor’s every move, and put up with a challenge.

With ClassPass, I get up to five workout classes for basically the price of one fitness studio class. (The medium package is only $35 if you live in NOLA!!) Whenever I sign up for a class, I can’t miss it — otherwise, I get charged $20. With a gym membership, I could let it run all month and never set foot inside the gym. ClassPass doesn’t have this effect on me. It has actually inspired me to try something new every time I exercise, which is great for sustainable weight loss. Who would’ve thought I’d become the girl who gets excited about spin class?

ClassPass could definitely be a solution for you if you’re trying to save money and feel FOMO whenever you walk past sweaty people leaving a yoga studio. It’s not in all metropolitan areas yet, and it can cost more in certain areas, but it is worth the investment if it’s available. Keep it as long as you like, and when your salary goes back up, you’ll have even more money to book classes and stay in shape.

Look back at one of my banking statements pre-weight loss, and you’ll notice a Taco Bell or Burger King line under each day. I’m not even joking when I say this. I ate a lot of fast food, even on top of my bad eating habits at my two jobs. When I’m at my most active, I do have a pretty good metabolism, so I can indulge in a greasy bag once in a while. However, there’s a reason why all these health organizations tell us to avoid fast food — it’s not good for weight management. Oftentimes when I felt those dinnertime hunger pangs, I would drive up to the Taco Bell window to get a Crunchwrap and some nachos “on the side.” Each meal would total over 1,000 calories — and that’s on top of everything else I would eat that day. I haven’t cut Taco Bell out of my diet altogether, but I have been eating much, much, much less. Now I spend about $35-ish dollars a week at Trader Joe’s on wholesome food items instead.

You’d be amazed by how much money you could save by switching by switching from fast food to your local grocery store. Really! Fast food might be cheaper than dine-in at your favorite trendy restaurant, but it all adds up. Each Taco Bell bill was around $7 each, and I was down from spending that seven times a week to just $35-ish at TJ’s. You can do this if you’re on a budget, too. Doing so will allow you to stock your fridge with eggs, lean protein, and veggies.

3. I Threw On My Running Shoes

Now, I understand that not everyone “should” run, but I have done some research and have found that running is not necessarily bad for you. Running, done in moderation, is an inexpensive way to stay in shape. Just a short 45-minute jog is all it takes to blow off steam and experience your neighborhood in a new way. I am forever grateful by how many unique running routes I’ve found down here in the steaming hot Louisiana city.

I know that running in the heat sounds unbearable, but it’s kind of rewarding (for me at least) to find that I can survive a challenge (as long as it’s done safely, of course). These runs are great for me whenever I don’t have enough Classpass points to try a class. Sometimes I go right after work, but I’ve also tried heading out the door at 6:30 a.m. The later jogs are great for coping with a stressful day, and the early sprints are a great way to start off on a productive note. And finding the time to go for a jog yourself is much easier than you might think it is. Just make a point of throwing those running shoes on now and not just “later,” and you’ll save so much more time and money for the more exciting things in life.

4. I Controlled But Did Not Deprive

I live in Louisiana right now, and I’ll be honest, the food down here is amazing. We’ve got po’boys, beignets, king cake, pralines, jambalaya…Here, you’re expected to indulge — it’s a social custom. Nobody really eats for “fuel” down here, so I’ll allow myself the chance to eat something yummy every once in a while. I’m just more careful about my gluttonous behavior. Rather than downing a ton of sugary alcohol and sweets, I allow myself to drink a local craft beer and some crawfish or gumbo. (Okay, and like one beignet once in a while.)

Going back to the point about fast food, depriving yourself while losing weight is never a good idea. Doing so is said to cause you to binge as soon as the weight goes away. Eating too many calories is also a bad idea, and sometimes, counting calories is what you have to do. Does this mean I have an eating disorder? No, but it does mean that I find ways of eating enough while putting myself through a healthy caloric deficit (AKA weight loss). Counting calories also helped me save money on groceries.

I’ve learned that I can lose weight on a budget, and even eat some chocolate every once in a while. Tasty calories should simply be enjoyed at the right times; healthy, nutrient-dense calories should be enjoyed more frequently. Without sounding cliche, my weight loss journey has taught me that it’s better now than later. I managed to put aside my setbacks, lose weight, and find a job that was better for me, all without spending a fortune.

One day she’ll figure everything out, but for now, Sophia is just a writer, makeup artist, and hilarious human being. She loves pugs and dreams about marrying Brandon Boyd.