4 Thoughts I Had About Money After Rewatching Love Actually 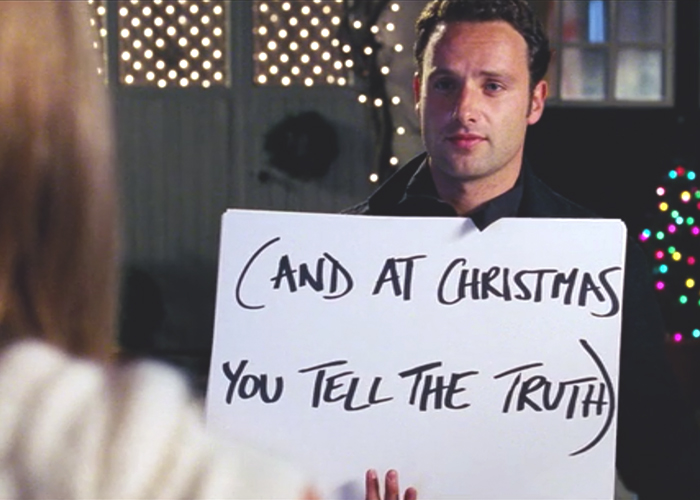 Ahhh, Love Actually. I’ve seen this movie a cool dozen times over the years. After I saw it for the first time, it quickly became one of my favorite go-to holiday movies. There are so many charming elements of this feel-good movie (not the least not of which is the fact that it features the now-deceased Alan Rickman…gah, still not over that), and I can see why people remain obsessed with it. All those British accents! A Hugh Grant dance scene! Gratuitous shots of London at Christmas time! Superb casting with a ton of stars! Let’s be honest, though, we all know Emma Tompson’s Karen is the strongest performer of this pack (although I think Billy Nighy is pretty brilliant as well), and good lord, Carl will remain the hottest “enigmatic chief designer” to have ever graced the big screen. But, depending on who who you ask, Love Actually is either a cinematic holiday masterpiece, or a jumbled problematic mess.

A few weeks back, when I had a night alone to myself, I decided to make a requisite cup of hot chocolate + Christmas cookies and rewatch it. It had been roughly four years since I had last seen it, and DAMN. Watching this movie again after all this time was illuminating AF. The ~wisdom~ I’ve accrued over the last few years made me notice things about it that I never had before, both the good and the bad. I don’t know if it’s because I’m older/live in a place of my own/got married/live in a city, but good lord. FIRST OFF, there are a few story lines that simply irk me (I.E. COLIN HEADING TO AMERICA FOR VARIOUS SEXSCAPADES), and parts of the movie I’m simply at a loss for understanding (why, why, WHY is there a running joke that Natalie is somehow fat???). Anyway, those issues aside, I was still able to watch the movie all the way through and enjoy it. However, because of what I do for work, I couldn’t help but partially see it all through a lens of money and finances and take issue with some things that I would have never noticed a few years prior.

So, without further adieu, these are some money-specific thoughts I had as I made my way through a screening of Love Actually.

1. “What in god’s name did that surprise wedding ceremony concert cost???”

I get that Mark is completely and utterly obsessed with Keira Knightly’s character, Juliette (who I still can’t believe was 18-years-old when she played this role), but the wedding surprise was a l i t t l e much. If someone did this when I got married, I would have been mortified. As I rewatched this scene again, I was floored at a) someone having the audacity to plan such a over-the-top moment and essentially steal the spotlight, and b) how expensive that must have been. Let’s break it down, shall we? That dude hired:

That is…an excessively expensive joke/surprise to play on someone. All I could think every time another person stood up to play a single bar of music was like, “chaaaaaaa chiiiiiiiiinggg.” In NYC, this shit would run you some serious $$$, and it’s definitely not worth a four-minute personal concert.

2. “Omg, THE PRICE TAG OF THAT FUCKING NECKLACE.”

The infamous necklace is part of one of my favorite scenes in the movie, and the drawn out, painful-to-watch gift wrap bit with Rowan Atkinson is entertaining as hell. (Also, I just love a moment where we get to see alt-universe Snape squirming as he buys a present for his mistress, hehe.) For some strange reason, one of my clearest memories from when I watched the movie ages ago was just how ugly I thought that necklace was. But most importantly, CAN WE TALK ABOUT THE PRICE of this thing?! First off, £270 (or $460 back in 2003) is an awful lot to pay for something that essentially looked like a golden bean with a chocolate chip stuck in the side.

Bleh. But looks aside, that price tag still felt really jarring to hear, even at my age now. I don’t know anyone willing to drop that kind of money on shit like this, and I know Harry buys it for Mia in a spontaneous and hurried mess, but c’mon man…you could have done a LOT better. And for that price, it better at least look halfway decent on…

3. Colin’s love life isn’t the only thing that’s wrecked, SO ARE HIS FINANCES.

Probably my least favorite character of the entire movie, and I always find it grating every time he’s on screen. However, aside from Colin’s other problematic personality deficiencies, that man definitely has wrecked finances. And, at my age, I can identify that as being perhaps The Most Unsexy thing by far. At one point in the movie, he runs into his friend Tony’s apartment telling him that he “rented out his flat to pay for his ticket to America.” Yikes. If you didn’t already need it, there was yet another red flag that Colin is more of a mess than any of us initially realized. Colin for sure as no emergency fund and/or savings of any kind to speak of, and that is more worrisome than the fact that he is totally unaware of what a “lonely arsehole” he is. Sigh.

4. Jaimie has TWO beautiful prime-location homes and does what for work??

Something that baffled me watching the movie this time around. The state of Colin Firth’s character, Jaime’s, personal wealth. That guy not only has a beautiful flat in the very heart of London BUT ALSO a gorgeous villa in France, he can spontaneously take a month and a half off from work to “write” by a lakeside, has the flexibility to relocate to Portugal at the drop of a hat, but does what for work exactly??? I know what city rental situations are like, and I couldn’t help but wonder what the hell this dude does for money, since it’s never actually specified. Part of me was like, if he is indeed a writer, I would very much appreciate some damn context for how successful he is and/or how lucrative his freelance jobs are. It’s 2016, and I demand this info!!!

Will continue to ponder that question…

Anyway, those were just a few of the thoughts I had while reading, but I highly suggest you reading this article and this article for more hilarious thoughts about the movie. For me, Love Actually remains a holiday favorite because it’s just plain entertaining to watch. And, holiday movies are meant to be unrealistic and a degree removed from reality, right?!!