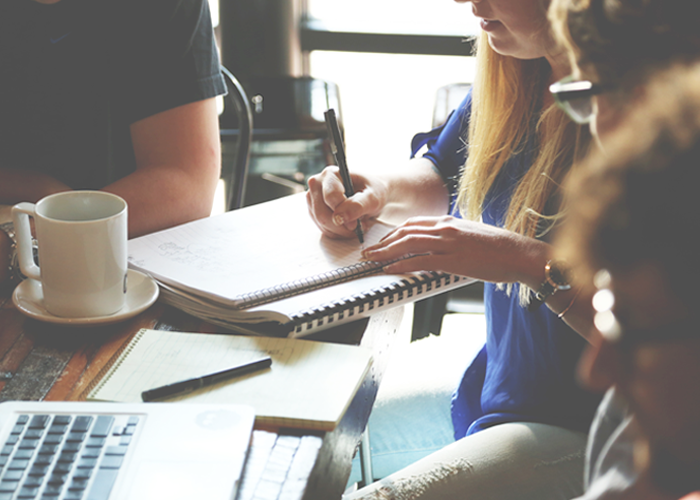 If you’re like a lot of young professionals, the idea of networking can feel a little slimy, impersonal, and downright creepy. Everyone dislikes (at least to some degree) the idea of using their friends to get jobs — it’s nice to feel like you snagged a job on your own merit! And, being friendly to someone just so they can help you get ahead is gross.

I’m here today to talk a little bit about networking, because I agree with popular sentiment that  networking feels awkward. I also feel like you should want to get a job on your own merit, and you shouldn’t befriend someone just because they have something you want. I’m here to help change the notion of what networking is, because I believe it doesn’t have to feel forced or unnatural.

Dale Carnegie, who literally wrote the book on networking, How to Win Friends and Influence People, once said, “You can make more friends in two months by becoming interested in other people than you can in two years by trying to get other people interested in you.”

This idea completely changed my perception of networking. Networking isn’t about getting something from someone. It’s about building a connection, creating a relationship, and finding someone who you can help just as much as they can help you. Your network should be made up of the people you’re closest with—starting with friends and family. Then, it should work its way out to coworkers, classmates, and acquaintances. Finally, the outer ring should consist of the friends-of-friends and loose connections. It’s in this outer ring where you’ll generally find the most opportunities.

If you go into networking with a take-take-take attitude, you won’t get very far, but if you look at it as a chance to learn about new people and make new friends, you might actually find it fun. Having this mentality is more sustainable, and will definitely be more beneficial to you in the long run.

Here are my essential go-to tips for getting started networking, especially if you’re a little shy! It’s not as difficult as it seems, and with just a small adjustment in attitude and technique, you can be well on your way to becoming a networking rock star.

Smile and Act Confident
When you walk into a room, you’ll feel better if you’re smiling, and you’ll seem more confident and open to someone coming up and saying hello. If you’re feeling really shaky, take some time in the bathroom before going inside and do some power poses. After you’ve grabbed a drink (and only one!), scope out the scene and say hello to someone else who seems to be alone.

Ask Questions
The easiest way into a conversation is to ask questions. Showing interest in others will promote others to take interest in you. If a group is in the middle of a conversation, wait until you’ve heard enough to know what they’re talking about, and then pose a question. Then, be sure to listen carefully. It will show you’re interested in what they have to say and help you break into the conversation. If I’m meeting someone for the first time, I like to ask, “What projects are you working on right now?” instead of “What do you do?” because it doesn’t assume anything about the person’s employment status.

Don’t Forget Your Business Cards
Bring your business cards with you everywhere and don’t be afraid to pull them out frequently, or to ask for someone else’s at the end of the conversation (it’s a great way to exit a conversation gracefully). In fact, when I was first starting out, I made a little joke out of giving mine out, saying, “I just got these fancy things and want to share them with everyone!” If your office hasn’t provided you with any, it’s worth purchasing some affordable, generic ones with your name and contact information (and a title if you’d like!) from a place like Moo or VistaPrint. If you work in an industry where business cards are considered old school and/or no longer necessary to carry, download a networking app to take down names of contacts you meet.

Follow Up
The most important part of networking isn’t actually meeting someone—it’s following up and staying in touch with them long after the connection was established. Within two days of the event, send a quick email or LinkedIn request to everyone you’ve met to let them know how nice it was to meet them. If there was someone you really connected with, go ahead and ask them out for coffee to continue the relationship further. You’d be surprised at how many people say yes to coffee/lunch outings, and it’s a great way to pick people’s brains about what they do.

Keep In Touch
Don’t forget to stay in contact with your network! Maybe it’s an old professor or a former boss, and it’s been a few years since you spoke to them. Maybe you switched jobs, and you have an entire office of old co-workers you can tap into for advice or opportunities — use them! I promise, they will be happier to hear from you than you might expect. Reach out any time you read an article or see a video that makes you think of someone. And, once or twice a year, make an effort to reach out to your whole network, just to let them know you’re still thinking of them. You never know when an old connection might come in handy. The holidays or the start of a new school year can be a great time to do this with a card or quick email.

Networking doesn’t have to be painful — it can be fun! As long as you give off genuine and friendly vibes, and don’t use people for the sake of getting ahead, you’ll be able to network with confidence and dignity. Go for it!

Kristin Maffei is a New York-based copywriter, poet, and budgeter-extraordinaire. You can read more of her work on her website and blog.