5 Thoughts I Had About Money While Watching Big Little Lies 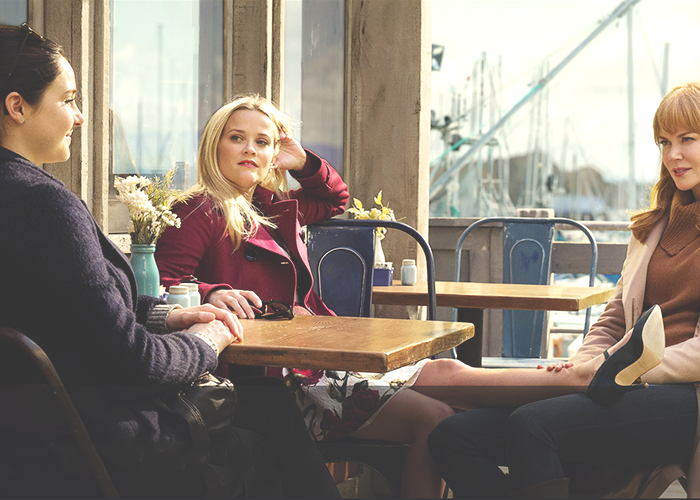 1. When you think about it, there is an incredibly-omnipresent, often-disturbing relationship between affluent women and wine. I read a book called Drink

a while back that serves both as a memoir of one woman’s alcoholism, and an exploration of the relationship women have with alcohol in general — highly recommend reading it, as it’s pretty shockingly eye-opening. Essentially, we are marketed to aggressively and uniquely, taught to associate alcohol — particularly wine — with a reward, an affirmation, and a comforting release. We are made to think that a good drink is something we earn, something that we gift ourselves and our friends with, something that is not just used to lubricate our lives but to give it an extra layer of meaning and joy. I won’t pretend that I don’t love a glass of wine or a nice cocktail, but I often feel self-conscious about the reasons behind these associations we all have. Saying things like “I deserve a drink,” or “I need a drink after that day” feel icky on even the lightest consideration, and watching shows like Big Little Lies, one is reminded of how strong these associations still are. The women on the show are gorgeously, lushly affluent, and a huge part of the expression of that wealth is in their consumption of wine. Most of the characters are seen at least once per episode with a large, elegant glass in their hand, and the connections it draws are clear: wine is not just about the celebration and release of life, but also a status symbol. A woman of means defines herself, among other things, by the kinds of drinks she treats herself to.

exploring the 2016 presidential election, he addresses the idea that Trump was — despite his vulgarity — perfectly suited to television, while Bernie Sanders was often excluded from the conversation. Put simply, Trump’s xenophobic, sexist, hateful rhetoric was territory television has always covered, while frank discussions of poverty and wealth inequality are still deeply taboo. And this idea was so clear to me while watching Big Little Lies. Jane’s character is clearly supposed to be acutely less wealthy than the women around her, openly struggling with money and single mother-dom. And yet her version of poverty in the show is still unrecognizable to basically anyone who has struggled with money in their lives.

She lives in a sweet bungalow, drives a clean, new car, goes for coffee nearly every day with the wealthier women, and generally lives a life that is only occasionally peppered by comments about her struggles. A realistic portrayal of her situation would, of course, disrupt the story, as the truth is she would never actually be friends with women so high above her income level and so obsessed with appearances. But even in the superficial trappings of her finances, she comes across as solidly middle-class, typing away on her Macbook and hiring babysitters while alluding occasionally to the fact that she can only find part-time work. And in a show that so committed to a raw portrayal of domestic abuse, it served as a reminder that we can see as much brutal violence on television as we want, but almost never see accurate portrayals of poverty.

3. One thing the show does drive home, financially, though, is how different domestic abuse is for someone with money. In the scenes where Nicole Kidman’s character is building her escape route with her new seaside apartment and second set of everything, it struck me how different it all looked from the experiences most women have in domestic violence situations, where money is one of the most frequent reasons they have no escape. It’s an uncomfortable thing to discuss, but important to remember how much class privilege impacts every element of our lives, and how there can be a level of privilege even in something as horrifying as abuse. It was a brutal story to watch, and by no means excused by the financial comfort of the characters, but it is worth reminding ourselves how rarely women actually have the opportunity to build escape routes for themselves.

4. It’s also interesting to consider how differently wealth is expressed in different parts of the country. Living in New York, myself, it’s easy to forget just how much wealth surrounds you, because so much of it is hidden away in apartments you will never see, parking garages you don’t have access to, and clubs you can’t afford to enter. A million dollars of property here isn’t much, and even if it were, it’s not something that you can pass by on the street. The sprawling, ostentatious Californian wealth is something I’ve only been exposed to a few times in my life — strolling communities in the nicer parts of Los Angeles, driving along the coast — and each time it struck me how much more of a competition individual wealth can become when all of it is so exposed. To an extent, even the wealthiest New Yorkers can live fairly humble lives, with little square footage, public transit, and shared outdoor spaces. But when everything from the size of your home, to the lawns and pools and gardens that surround it, to the cars that sit in its driveway, are part of the public spectacle, the pressure to make each so much grander than you need must be absolutely stifling.

5. The term “first world problems” is a generally-offensive one, as it obviously implies people not of the wealthy Western world cannot experience day-to-day annoyances which they very much do. But there is another layer, which we can perhaps call “wealthy white woman problems,” which have a profoundly addictive quality to consume. Shows/books like this one, and dozens of bestsellers that accompany our summer vacations and line our shelves, recount the same kinds of stories over and over: affluent, usually white, women experiencing emotional turmoil while discussing and analyzing it at length, almost always over wine. And I wonder if at some point we don’t go from seeing these stories as cautionary tales, to seeing them as aspirational even in their moderate tragedy. We indulge in these stories, devour them, and maybe even long for a life where we have Tuesday evenings free to go to an upscale bar and talk for hours with a friend about our philandering husbands. At the end of the day, I have to ask myself: culturally, do we think it’s better to be a Sad Rich Woman than a Happy, Middle-Class Woman? And if I am answering honestly, particularly after watching a show like this one, I believe the answer is probably yes.