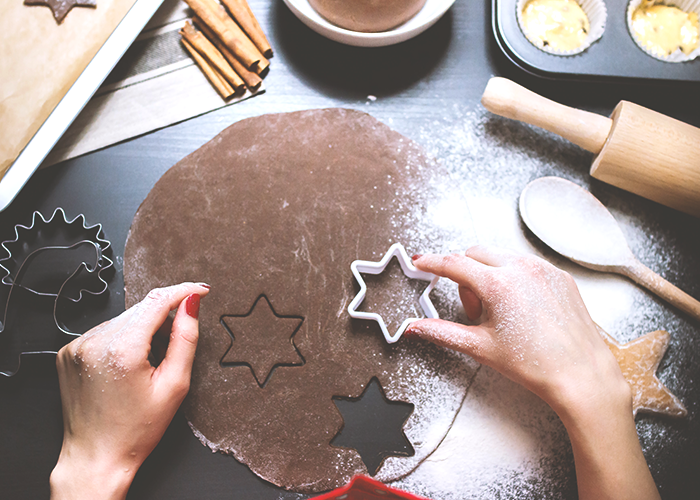 1. It’s Valentine’s Day, which is something we don’t usually celebrate — thought it feels at this point like eschewing Valentine’s Day is actually more cliché and boring than celebrating it. We all get it, it’s a capitalist invention designed to make people spend money, feel inadequate, and falsely speed up the trajectories of new relationships. That has been established, and repeated ad nauseam. And while I definitely feel that avoiding things like special menus, stressful ~*~experiences~*~, and generally treating the day as the one time per year you’re supposed to cram in all things romantic, I also feel that taking a day to celebrate and remind yourself of your love is never a bad thing. You can eschew all that’s bad about the day, and still have fun (our plan is going to see a documentary, then going to eat at the bar of one of our favorite restaurants, because bar-eating is  t h e  b e s t). But in that way — that notion that you can take what is good and still be very lucid about all that is bad — Valentine’s Day feels very similar, to me, to weddings.

2. I’m engaged, as I’m sure you know. It’s been a few months, and we’ve been lucky enough to have a smattering of intimate and lovely celebrations on both sides of the Atlantic to toast our engagement. Marc and I designed a ring together with what is undoubtedly my favorite jewelry designer, and we’ve generally had a wonderful experience with the whole thing thusfar. We are planning to be married in summer of 2018, so we have plenty of time to plan, and the wedding itself won’t exceed 25 people, so it all feels manageable. In the meantime, we’re in the active stages of planning our “bachelor/bachelorette,” which will largely just be a slightly amped-up version of the yearly retreat we go on with our friends from both the States and Europe. I think that in many ways, the fact that our loved ones are so spread out, and we’ve had to make a second job of getting everyone together on even a yearly basis, we’re very attuned to this logistical process, and haven’t felt overwhelmed by it. And more importantly, we realize what I believe is important, and what I believe often gets missed in the chaos and expectations of weddings: seeing the people you love together, and making sure they all have a fantastic time.

I personally have no interest in a fancy dress or flowers or decor, we don’t and won’t have any kind of registry, and I’ve not given a second thought to things like formal invitations or stationery. And of course this is in part necessitated by the fact that getting everyone together, logistically, is in and of itself a huge time-suck. But I think what’s been shocking to me in all of this is how much I don’t miss anything. I have no desire to do what feel like “bridal” things, no desire for bridesmaids or all of the gendered fussing that goes with them. I thought that I might feel some inexplicable pull towards this stuff once I was finally, actually engaged, but it has largely been the opposite. The only thing of any importance to me has been getting people together, eating food, and drinking lots of great wine. And I really do wonder how many brides might feel the same if they didn’t feel they had to participate in any of the excess.

3. Similarly, I know that many women are able to sort of tune out the aspects of traditional weddings that feel steeped in cringeworthy gender norms, but I find myself personally incapable of separating “harmless tradition” from “symbolic gesture upon which I find it offensive to found a union.” When I think, for example, of the idea of my father symbolically — in front of a large group of loved ones! — “giving” me to Marc, the political reaction I feel is almost physical. There are so many traditions to navigate that center around the woman as virginal chattel, given from one man to another while her peers and elders look on, and they feel like something I hope we can shake in this generation, or at least in the next. Much of what I find so offensive, and so damaging, about the Wedding Industrial Complex, is its insistence that women — no matter how they may live their day-to-day lives — must come back to this concept of essential femininity in order to properly demonstrate their love. We are expected to preen and swan around, to dress up like dolls and fuss over every detail, and to submit to being “given” from one man to another — and if we deviate from those things, we are suddenly the quirky or odd ones, instead of the ones who are celebrating our union largely the way we live our lives: as equals.

4. But perhaps the biggest and most offensive issue with the Wedding Industrial Complex, and this very much ties into the issues we all seem to take with Valentine’s Day, is the sheer, galling cost of it all. Of course, my sensitivity on this issue is somewhat amplified by the fact that I run a website about money, but the numbers don’t lie: the average wedding costs $31,000 in America, and without even scratching the surface of what you could do with that money instead, simply comparing it against the average amount of student debt in this country — $29,000 — the dynamic speaks for itself. Almost literally every wedding I’ve been to has been an elaborate, lavish ceremony in which one or both members of the couple was burdened with debt. This is not at all an indictment of them as individuals: this is simply the norm.

Parents feel more apt to give for a wedding than to help free their children from debt, spending tens of thousands of dollars on venues and flowers and centerpieces feels more natural than putting that money towards a home, and generally spending in a way that we would never normally permit ourselves to is the expectation. And while I don’t think that this means that people shouldn’t have weddings — they are beautiful, important celebrations! — radically redefining what those celebrations have to be feels beyond critical in an era where wages are depressed and debt is at an all-time high. There are a thousand ways to drastically reduce the cost of a ceremony and a reception, none of which would sacrifice the essence of being with the people you love. It is up to us to determine the value of every single dollar, and to most importantly never let a bridal magazine or Pinterest board or acquaintance’s Instagram post dictate what is valuable to us.

5. One thing I have been pleasantly surprised by in this whole process, though, has been how easy it is to do things on your own terms when you are clear, direct, and unsentimental about it all. We are simply not having a big wedding with extended family — Marc and I have, between us, over 20 aunt and uncles, and twice that in cousins. Our guests are going to have to make a serious voyage, take several days off work, and lodging alone is going to be a logistical nightmare. We are, by necessity, having an extremely small wedding, and some kind of informal cocktail party in each country after the fact to toast it, to which people can come, or not come. We aren’t having any sort of bridesmaids/groomsmen, just a simple witness to sign the paperwork. My goal is to spend no more than $200 on a dress — something I’ll find when I find it, off the rack — and to have it be something I can wear again frequently. And because these things have been clear and up-front since the beginning, there has been almost no pushback. Yes, there are people whose weddings we attended whom we can’t invite, but you can find other ways to make it up to them, and explaining to them in an honest and forthright way is more than enough. The idea with creating the wedding you want is to own it totally, to always be kind and respectful but to remember that you are a grown woman who doesn’t have to spend countless hours and tens of thousands of dollars to please everyone else. I have found that all of this mythical pressure people warned me of is largely nonexistent if you show people from day one that it serves no purpose — you can be the bride you want to be, but only if you insist on it.