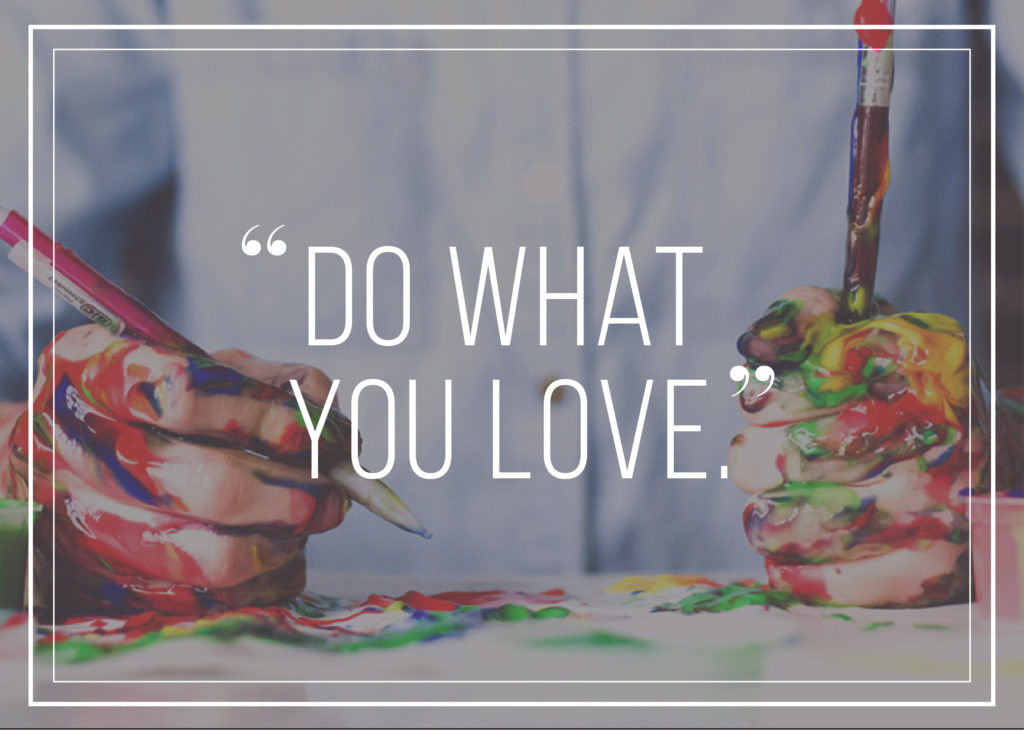 The other day, I was in a Marshalls grabbing a few things for my kitchen when I came across this sweet little framed print of a quote. I am generally very averse to these prints, even when they come in lovely pale blue wood frames, and contain sentiments that I’ve never heard before and therefore feel at least a little less cheesy. It’s irrational, but I feel like there is something about being “the girl with the inspirational quotes in her house” that feels very un-me, even though I find myself attracted to many of them that I see on Etsy. In this particular case, the overall look of the writing and the little wreath won me over, but I fully acknowledge that this is arbitrary. I’m a human with eyeballs, so I find aesthetically-pleasing typographic quotes nice to look at. And Lauren creates many beautiful ones for TFD’s Instagram, which I love. Our theory is that we make the Pinteresty image macros but with actually practical, thoughtful words in them, instead of just “Be Happy” or “Hustle & Champagne” or whatever. But again, this is all arbitrary.

I have that little framed quote on my backsplash, and several more scattered throughout my house. And they’re not excerpts from some incredibly-dense physics textbook. We all succumb to the Pinteresty-ness now and again.

But when it comes to inspirational quotes, there are the benign-if-cheesy, and then there are the downright dangerous. Some of these quotes lead us to believe that we’re somehow missing the essential meaning of life if we’re not living in some exact, perfect way, a way that usually looks great on paper and maybe not so much in practice. I’ve already written extensively on the mini-phenomenon of “Don’t worry about money, just travel,” because it’s probably the one that has most infected otherwise-savvy young people like myself. But there are several quotes I internalized at some point in my life, which led me to hold worldviews and make decisions that were seriously bad for me, sometimes for years on end. I have some ~inspirational~ quotes I seriously regret ever hearing/seeing on a canvas at a Target, and these are the six biggest. 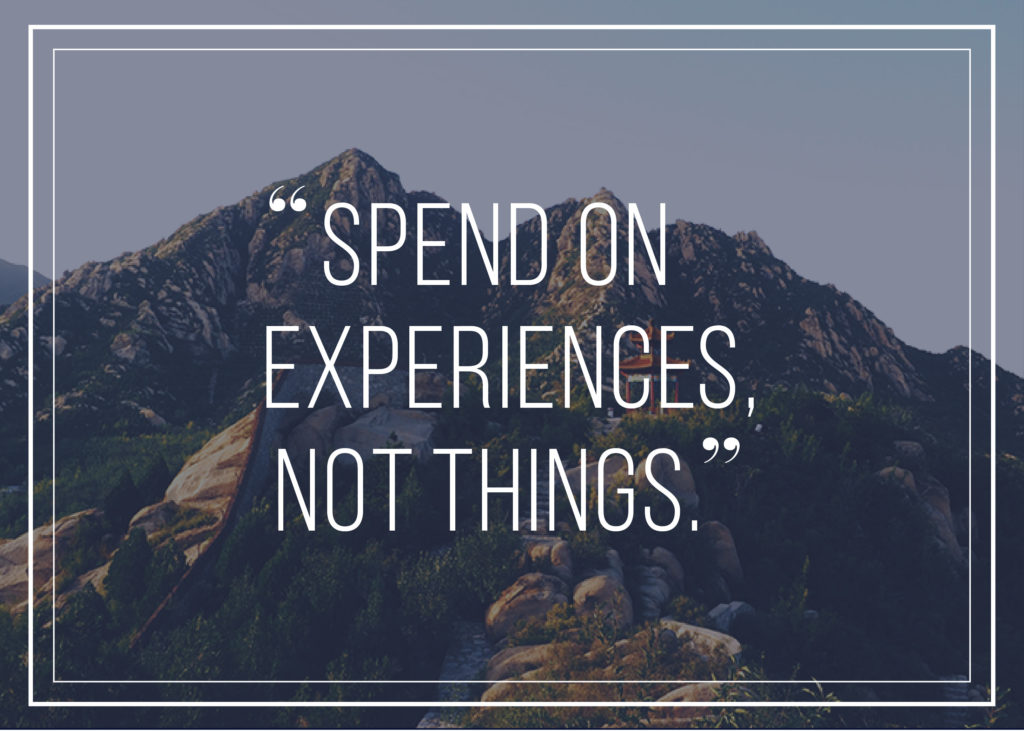 I used to be really into the idea, particularly when I was an idiot teenager/early 20-something, that life would magically get better the second I started spending on ~experiences~. Given my generally-poor relationship to money and logistics at that time, this “experience spending” usually translated to things like music festivals with only two artists I actually wanted to see, international travel via the world’s worst airlines, money-draining flings with a European, crashing on a lot of sketchy couches, and impromptu road trips that usually ended with smoking cloves outside of bars I couldn’t get into. In short, idiot experiences.

And sure, some were worth it, but a lot of them were definitely not, and I can think of a million “things” I could have put my money into that would have enriched my life way, way more. Because a) not all experiences are created equal, and only some really have that deeply-enriching benefit, and b) there are a lot of “things” that can be enriching, whether it’s a bouquet of fresh flowers by your window each week or a few investment wardrobe and home pieces that prevent you from having to buy a new everything once per year. Spending on things can be very good, and smart, and even make you feel more zen.

Honestly, this stupid quote is the absolute worst, and yet the most prevalent by far. “Doing what you love” is a totally nebulous, misleading term, because even the most perfectly-crafted jobs have elements of them that are going to suck. There are going to be days, and tasks, and people you don’t love about them. There is no job that feels fully like “what you love” at all times, or doesn’t feel like a job sometimes, because it literally is one.

And there are also many good reasons to not even make your passions your job in the first place, because you want them to remain a purely creative outlet and not be compromised or made into an obligation. And more importantly, there are plenty of people who don’t have the luxury of “doing what they love” because they need to fucking make money, and sometimes that doesn’t perfectly align with their dreams of making dreamcatchers to sell on Etsy. Making someone feel like doing their job and supporting themselves is somehow a moral failing, on top of being disappointing, is frankly an asshole move. This quote is an asshole move. 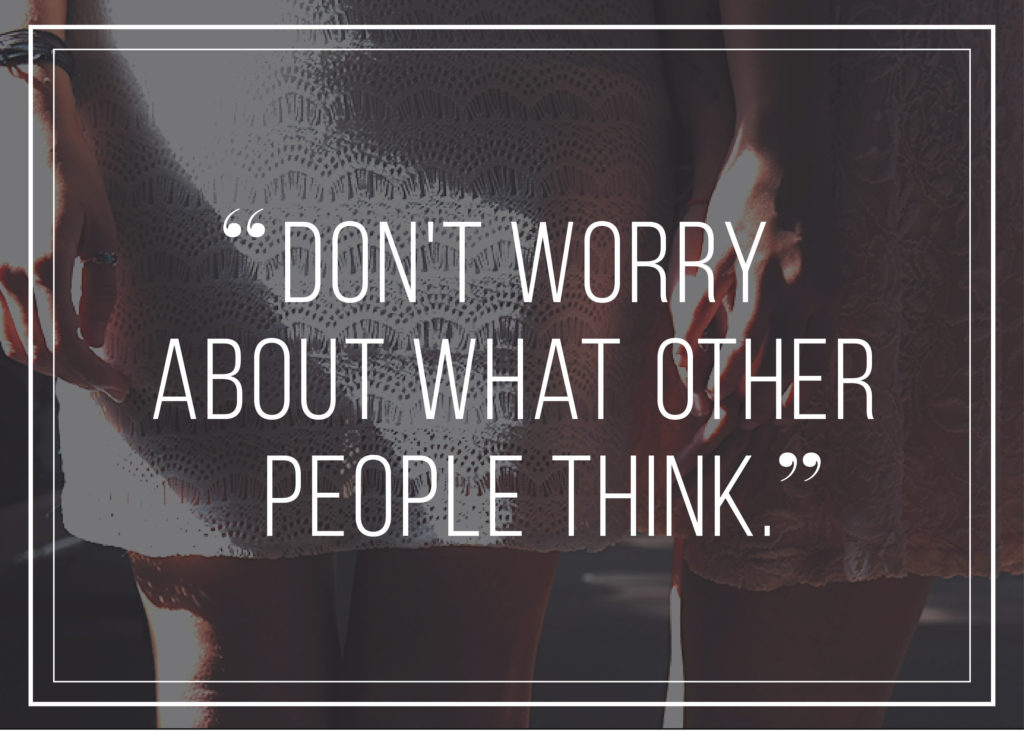 Um, yes, you should definitely worry about what other people think. Like, in a big way. There are people — loved ones, employers, mentors — whose opinions of you you should absolutely cherish and take into account, and appreciate for having a level of objectivity we can’t have about ourselves. The real saying should be “narrow down the list of people for whom you really care what they think, but really, really care, and work to be a better person in their eyes.” It’s not shallow to want to be better for someone besides just yourself, and some of the best relationships are the ones in which you are living up to one another’s hopes and expectations. Obviously, caring too much what people in general think is a bad thing, but we’ve all met those people who truly don’t care what anyone thinks, and those people are usually the ones posting conspiracy theories on Facebook, selling hallucinogens from the friend’s couch they’re squatting on, and getting married at Burning Man. 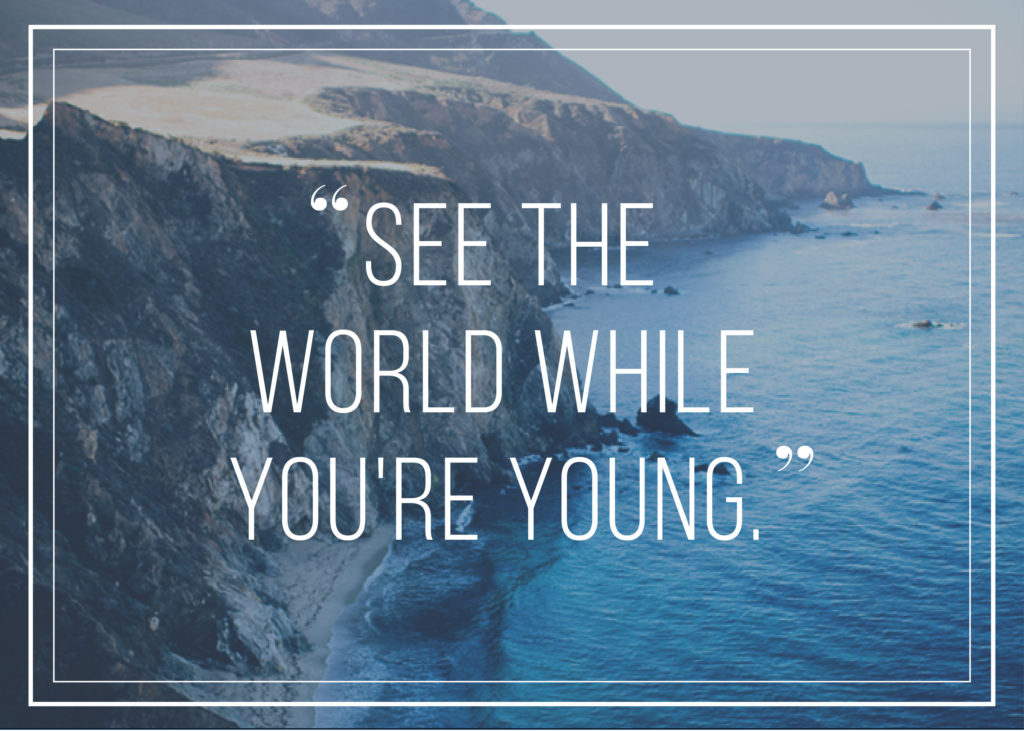 Why do so many dumb inspirational quotes act like you’re going to die the day you turn 30? Like chill out, maybe you can travel throughout your whole life if you plan reasonably and don’t treat your 20s like a “life experience” going-out-of-business sale. 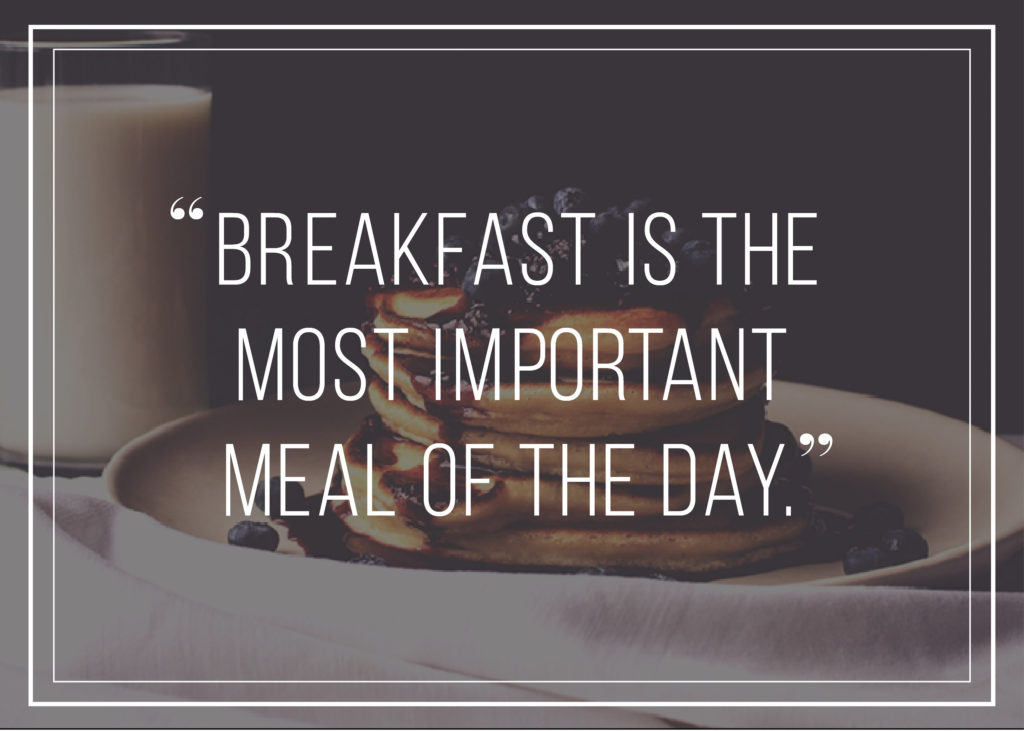 Okay, so to be fair, this nugget of ~wisdom~ actually started as an advertising campaign for cereal (yes, really), but it has definitely infected the motivational quote sphere as a kind of prophecy for holistic productivity. You’re supposed to get up at the crack of dawn, eat a nutrient-packed bowl of shit like overnight oats and sliced fruit and chia while staring pensively out your window and maybe reading a print newspaper article. Then you can truly start your day and get into the grind of whatever you’re doing. (And of course, Aggressive Morning Person is also assuming that you’re “doing what you love.”) Everyone from lifestyle bloggers to Silicon Valley CEOs love to out-morning each other, and part of that involves taking your breakfast routine super-seriously. But guess what? The whole “breakfast is essential” way of thinking is totally bullshit. Plenty of people don’t have breakfast for their entire lives and are totally fine, and many of us actually experience huge benefits from avoiding the meal. Breakfast-worship is just another way to make us all feel bad about not living our airy, GOOP-y best lives. 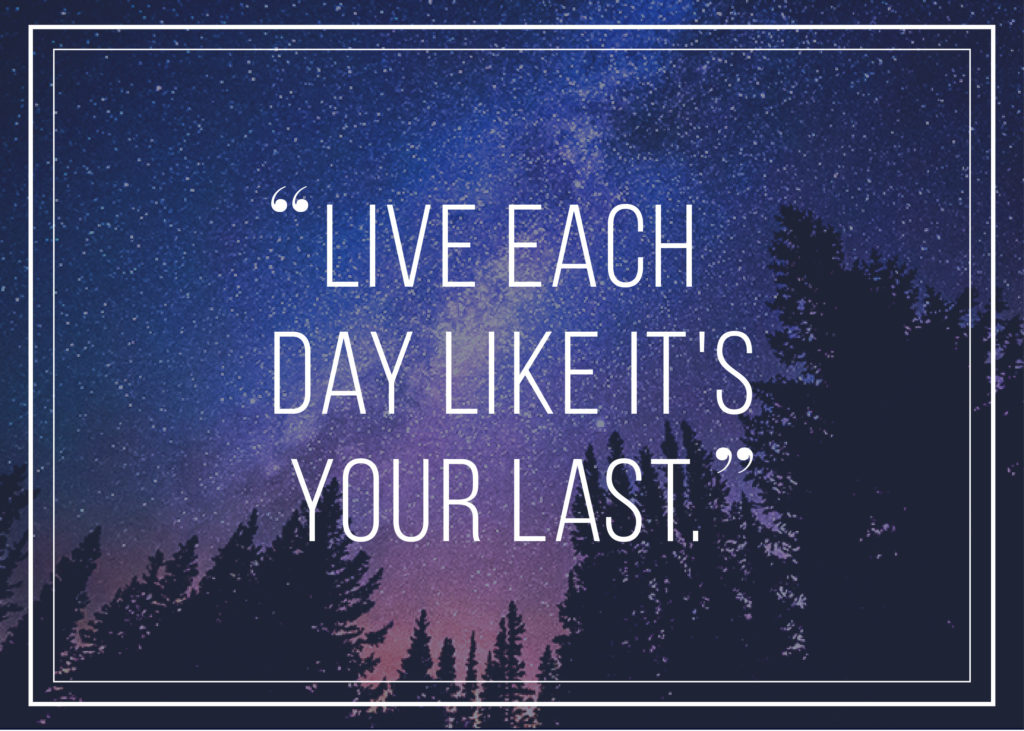 Umm, or don’t. How about you live your life like you’re going to live for a lot longer, and are as invested in the happiness and overall balance of Future You as you are in Today You, because you’re not a petulant teenager who sets shit on fire as a recreational activity? How about you maybe save a little money, and delay a little gratification, and make plans that extend past where you’re going to brunch this weekend? How about we stop glorifying the people who quit their jobs with no backup plan to go pursue their dreams of leading a steampunk New Orleans burlesque show, because shit like that is ridiculously irresponsible and stands a chance of very much not working out?

Let’s act like adults, and start dividing and conquering our goals, maybe as if we actually wanted to achieve them.