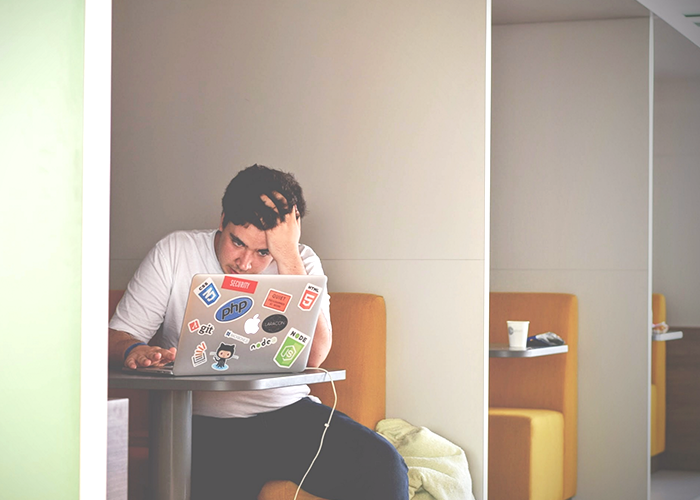 Living with student debt is something that we talk about often here on TFD, but living with six figures of student debt is a topic we rarely talk about in-depth. We’ve written that the average 2015 graduate has roughly $35,000 of debt, but what about the people who have well over that number — loans that spill well over into the $100,000 range?? I, myself, am familiar with hefty student loans, because my (now) husband graduated from college with about $125k in loans. Luckily, he was able to get a job that made his monthly loan payments manageable, but if he never secured that position, our lives would look very different. Having six figures of student loans is life changing, and I don’t think anything can prepare you to see that final shocking loan balance.

I read a great article about one girl who reflected on what he wish she knew before taking out $81k in loans, and I feel like that sentiment echoes across a generation of students. I don’t think any of us could fathom the implications of having to make a $1,000+ loans payment per month. What makes it especially difficult is that significant debt pushes life milestones further and further away, and it forces you to sacrifice things that people around you might have no trouble affording. This can lead to broader ripples within your social circle, relationship, job, and family, the effects of which are difficult to anticipate. A friend of mine described her relationship with her student loan, saying:

“I equate my looming student loan to feeling like I’m being stalked by a bitter ex-boyfriend who never wants me to be happy…ever again. Every time I go out and try to enjoy myself, buy myself new clothes, or test out a new beauty product that’s kind of expensive, I experience a pang of guilt. Some of the enjoyment has been sucked out of my day-to-day life, because I’m frequently reminded of my loan and that I should be spending my hard-earned money more responsibly. I try to keep my head up and ignore the reality as best as I can, and turn the monthly payments into a positive thing. I’ll have a glass of wine or make a homemade cocktail when I make a payment — I think,’I should be patting myself on the back for making strides forward, not wallowing in self-pity.'”

My friend isn’t alone, and I’m sure that her feelings ring true for many others. This article talked about living in America with a ton of student loans, and said that “there are approximately 1.1 million people in the US who are saddled with student loans that have topped six figures.” The stories of people with six figures of student loans were the stories I wanted to shine a spotlight on. I wanted to share the powerful (and sometimes nightmarish) views of real people talking about their experience with loans. Take a look below.

1. The Reality Of Six-Figure Debt On An Actor’s Salary 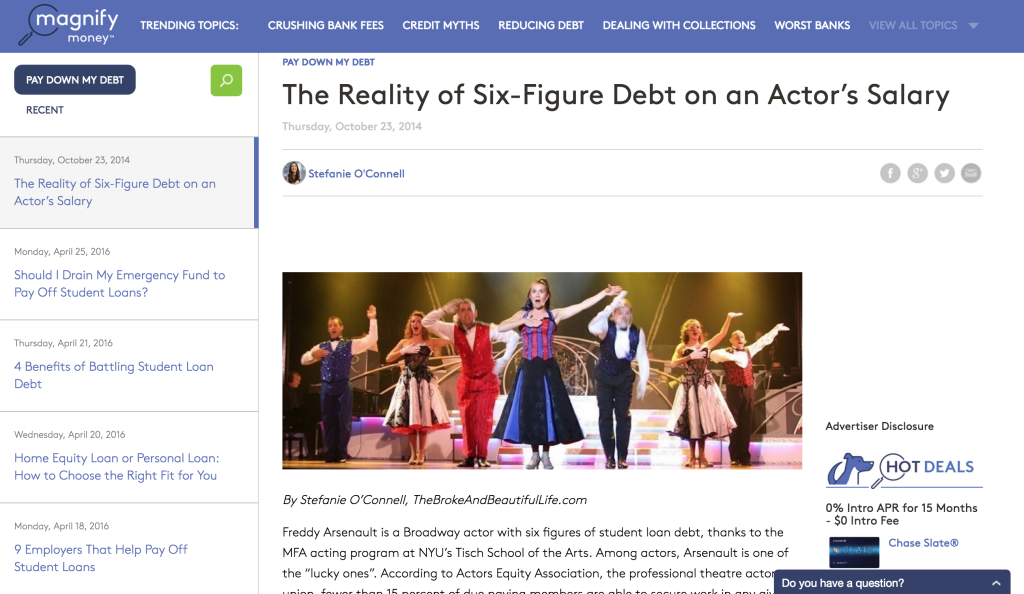 A truly eye-opening article about Freddy Arsenault, who is a broadway actor trying to pay off $165k of student loans on an actor’s salary. The article presents some shocking data about an actor’s ability to find work, and it says, “According to Actors Equity Association, the professional theatre actors union, fewer than 15 percent of due paying members are able to secure work in any given week and only 17,000 of 40,000 members work in a given year.” The article presents an honest and painful account of what it’s like to deal with a loan that threatens to suffocate you.

2. How One Man Paid Off A Six-Figure Student Loan Debt In Six Years 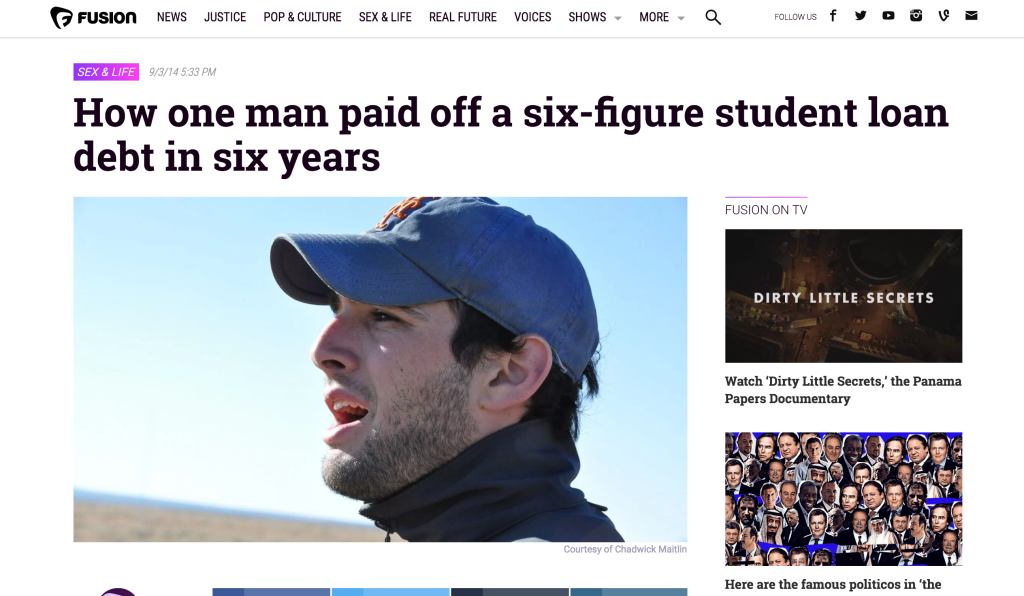 28-year-old journalist Chadwick Matlin paid off a massive student loan in just six years, which is an incredible feat of patience, endurance, and hard work. The loan was taken out in his father’s name, so it was even more important that payments were made on time to maintain his dad’s healthy credit. I loved that this article took you through the specific steps of how Chad overcame what could have been a potentially life-ruining loan. 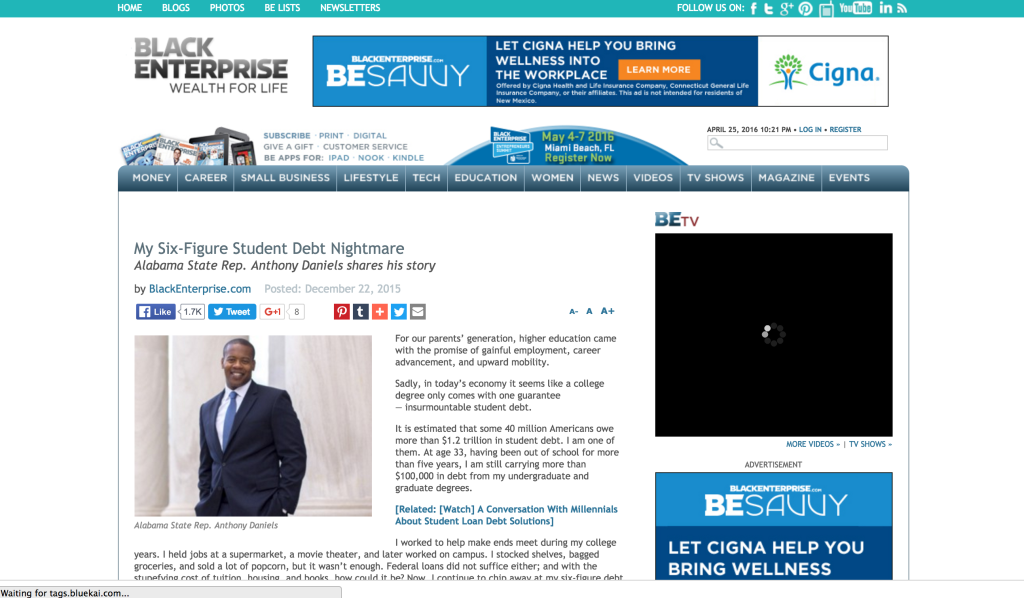 This story touched on what I think is the collective feeling our generation has toward student loans — that they just aren’t worth it. What happens when we take out loans with the expectation that those loans will reward us with a fantastic high-paying job, but they don’t? How does someone move forward with life, work, and loan repayment if they don’t secure a high salary? The author also talks about how and why all loans aren’t created equally, and he provides information about the differences between them. 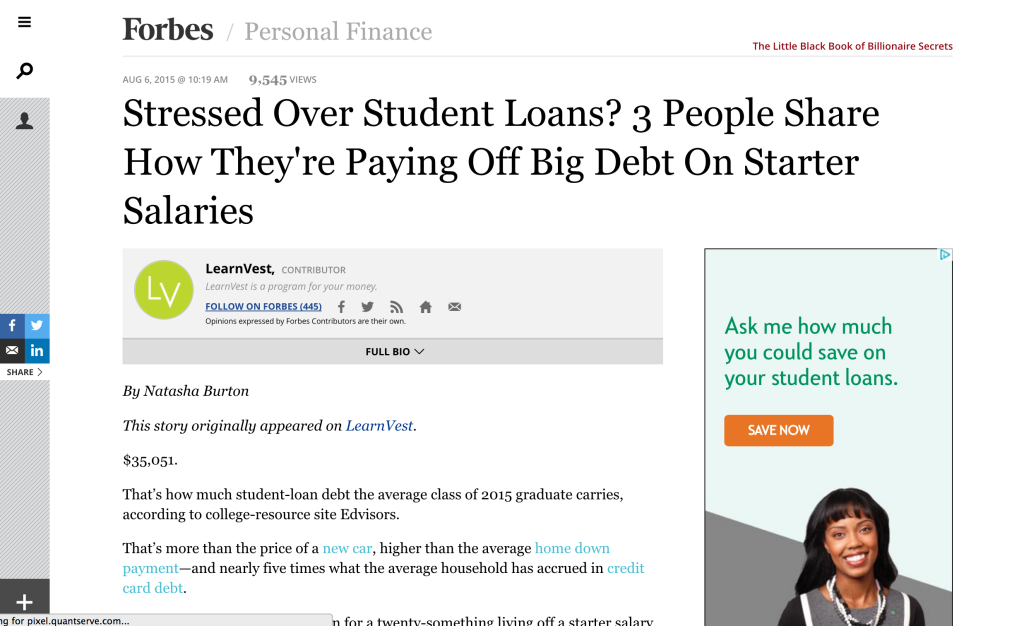 Forbes posted this great read (that originally appeared on LearnVest), which provided specific insight into three different stories about people who paid off sizable student loans. What’s more is that the article focused on people who repaid their debt on entry-level “starter” incomes. It’s easy to imagine that you can’t make real progress on loans if you don’t have a high-paying job, but these stories show how money can go a long way when applied to the loan in a smart way.

5. TRUE CONFESSION: I’ve Completely Given Up Hope Of Paying Off $186,000 Worth Of Student Loan Debt 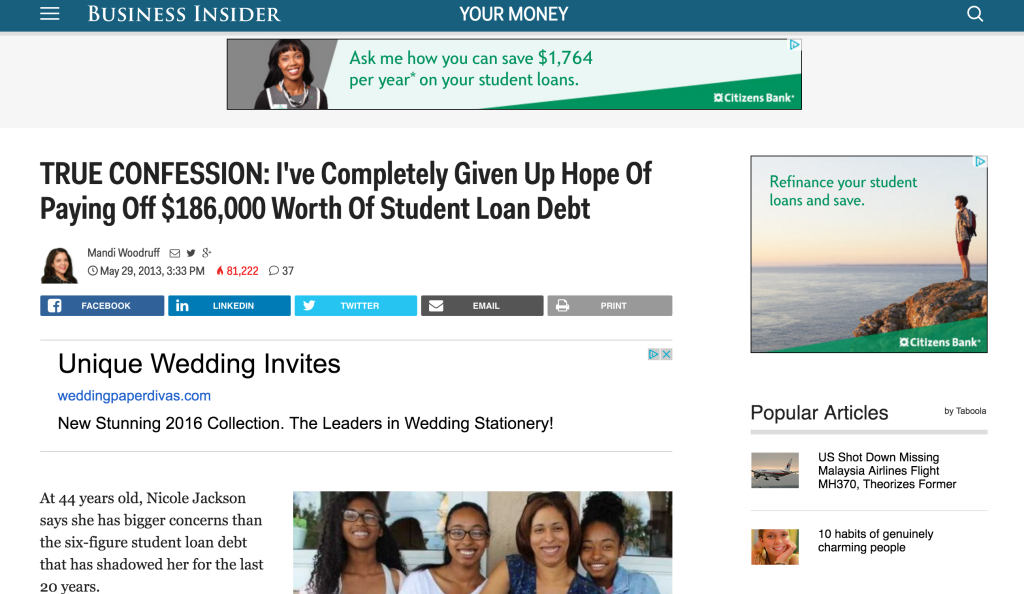 Of course, it’s wonderful to hear inspiring stories about people who paid off their loans, but what I loved about this article was the refreshing honesty with which it was written. With loans stacking up to $186k, it was easy to see why Nicole Jackson would be tempted to just say “fuck it,” and continue on with her life (expecting that she would default on the loan). Nicole talks about her situation, and writes, “I was making six figures, working 13/14 hour days, and my kids were sad because I wasn’t around.” Check out the article to read what happens in the end. 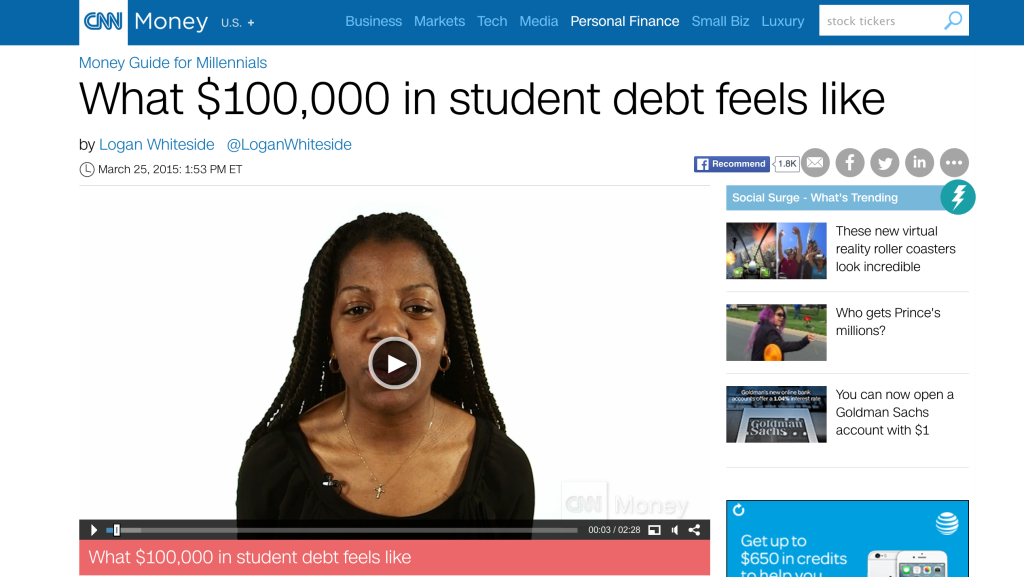 This article dives deep into an honest depiction about what it’s like to live with $100k of student loan debt. There are three stories in the article, and each of the authors describe the relationship they have with their debt. One guy describes having to eat a lot of ramen, while one woman bemoans the complete loss of her ability to travel. It’s interesting to read how each person deals with their debt, and how each of them are making progress to gradually pay it off.

Looking for helpful tips on how to repay your loans? Check out these great resources/articles here: