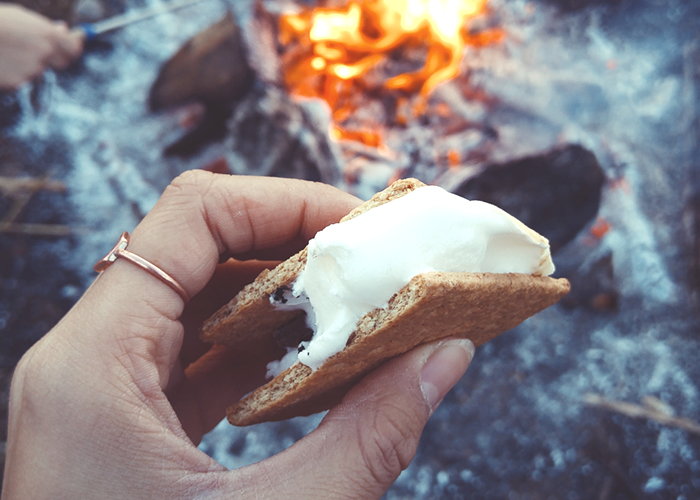 We all have our #yikes spending triggers. These just happen to be mine.

Basically, there needs to be a breathalyzer at the entrance of every grocery store, because nothing good can come from having two (or, let’s be honest, sometimes three) bloody marys with friends over eggs and subsequently deciding it’s time to get all your groceries for the week. (Of course you should! Responsible adults do their grocery shopping on Sundays, and no one is in more of a mood to get their shit together than the You who is riding high on the six cups of free refill coffee.)

It’s 3 PM, you feel like you’re hallucinating, you’re suddenly equal parts drawn to and repulsed by every food item, and no part of your body feels attached to your wallet. These are the grocery trips where you come home with two rolls of paper towels, chicken breasts, Pringles, a block of cheese, two apples, whole peppercorns for which you have no grinder, a twelve-pack of pamplemousse La Croix

, and some bobby pins. They are the trips in which you can easily spend 50 dollars and not even buy a single meal’s worth of ingredients, and that’s assuming you’re not going to a Whole Foods, in which case, God help you.

2. Food and/or drinks with a person I professionally admire.

I know that this social situation is essentially entirely in my head, but I can assure you that the remorse-spending it induces is very, very real. I’m more susceptible than most, probably, because of the fields in which I work (media, writing, yOuNg CrEaTivEs): they are industries full of ostentatiously-successful people, many of whom either come from money or have certainly come into it. And I live in New York City, where a one-bedroom apartment that goes for well over $4,000 a month is considered a deal in many neighborhoods. Money is a ~thing~ here, like it or not.

So when I am out with someone who makes me intimidated or envious, professionally, there is a sad, small part of my brain that clicks on — the exact same part that made me panic over having off-brand Uggs in high school, el oh el — and makes me want to spend where I shouldn’t to overcompensate. There is no rational connection between “Chelsea is buying a $70 dinner at a West Village bistro, followed by a $30 Uber home, and laughing about how fabulous it all is while she dies inside” and “wow, I really respect Chelsea on a professional and personal level,” but there it is. I have done that, and it’s embarrassing to mentally recap, even months (or years!) later. My temporary solution for this has become social isolation from 99% of industry peers until I can develop into a more fully-formed human, which I’ll admit isn’t perfect, but it’s working well thus far.

3. Festivals/concerts that I had no real intention of attending.

More often and more recently in my life than I would like to admit, I have found myself attending some sort of concert or “entertainment experience” that I would never have attended on my own. I have come to terms with the fact in my own life that I am just not a “concert person,” and only the most beloved artists can override that basic truth. I don’t like the proximity to others, the noise, the claustrophobia, or the ever-present risk that the artist is going to eschew every song I enjoy for their new, experimental album. But because of various social obligations (birthdays, OK Cupid dates in another lifetime, group outings I am roped into under dubious circumstances), I have found myself in everything from subdued jazz concerts to music festivals where you live in a dystopian tent colony for an entire weekend. In each case, the only way to combat my very real feelings of anxiety, terror, and boredom, I’ve let myself loose and justified the purchase of everything from $20 mixed drinks to $15 falafel platters with two (2) falafel balls, to a butterfly-patterned kimono which felt very Stevie Nicks-chic at the time but which in reality made me look like an unstable middle school art teacher. Against-my-will concerts have been the crime scene of an overwhelming number of Bad Purchases for me.

4. Having a drink at the hotel bar.

I guess this one is sort of an inherent humblebrag, because I am in a work situation where — on relatively rare occasion — I find myself at a mid-level hotel for a professional engagement. And I say mid-level only to indicate that I am in no way the kind of minor internet celebrity who gets put up at the W and the St Regis to do shadowy “brand-building” activities for incongruous clients. (I see you, Vine stars whose primary medium is homophobic jokes, acting as “brand ambassadors” for Brawny paper towels.) Anyway, long story short, sometimes I’m at a hotel doing work things — and even in its relative modesty and banality, this still feels like one of the fanciest, chicest, most exciting parts of life to me. Starting with the plastic-cup bloody mary on the way there, the whole experience makes me feel like Roger Sterling to Lauren’s Don Draper (okay neither of us are a Don, but I’m clearly much more of a Roger, so that’s the way the analogy will have to be), taking the town by storm as we work diligently through the day and treat ourselves to an incredibly chic dirty martini at the hotel bar at night. Hotel bars are the only place where I will typically order a martini, even if they are literally, like, $16, because it just feels like part of the experience of being a fancy, traveling woman. I assume I’m not the only one who feels this profound social pull, but I may feel it more acutely than others, as I have watched every episode of the aforementioned Mad Men approximately 15 times.

5. Independent boutiques when I’m the only person in the store.

It is sooooooo stressfulllll being in an independently-owned boutique where you are the only customer, the entire place is approximately 20 square feet, and the salesperson is the well-meaning-yet-cloying owner who never once breaks your gaze, following you often literally around the store to insist on all her various wares which would look “sooo chic” on you, complimenting you out of bare economic necessity, and giving you the very real impression that her entire financial plan will collapse if you do not buy that one shawl-collar sweater you would under no other circumstances even consider. This shopping experience gives me nothing short of body-wide hives, and has consistently resulted in me buying clothing items that have no place in my wardrobe, or on my body. Ideologically, I am very much for supporting independent owners and ethically-produced clothing, but good lord I am opposed to feeling the sweaty obligation you usually feel about children selling candy bars to go on a class trip, except the child is a 30-year-old woman and the candy bar is a $120 geometric slip dress that makes you look like a refrigerator. I’m sweating just thinking about it.

I know there are people who can go to a Sephora/Nars/MAC and just pick out what they’re looking for and leave, but those people are not me. (Though let’s be honest, I don’t go to MAC because their makeup makes me look like Marge Simpson hit with the makeup gun, and gives me cystic acne.) But still, the point is that I have almost exclusively resigned myself to ordering this stuff online, or asking Marc to pick up a specific thing while running errands, because it’s just best not for me to be in these stores.

As someone who already feels self-conscious about her skin, I experience the most dangerous combination of abashed and hopeful when one of the salespeople starts insisting on the ~miracle cure~ that will give me dewy, pore-free skin. My skin feels like a billboard that says “I have no idea what the fuck I’m doing, sell me things.” And between that and the natural, less-complicated desire to pick up a fun new eyeshadow palette

or lip color, it’s almost impossible to beeline to the product I want and head to the cash register. And even if I do make it to said register, the truth is that this is where I’ll do the most damage: single-serve face masks, canned face water, rose lip balm, tiny nail polishes which will turn to a gummy bottle of frustration after one use — it’s all there for me to buy, and immediately regret.

So I avoid these stores as much as humanly possible, along with the rest of these fraught experiences.