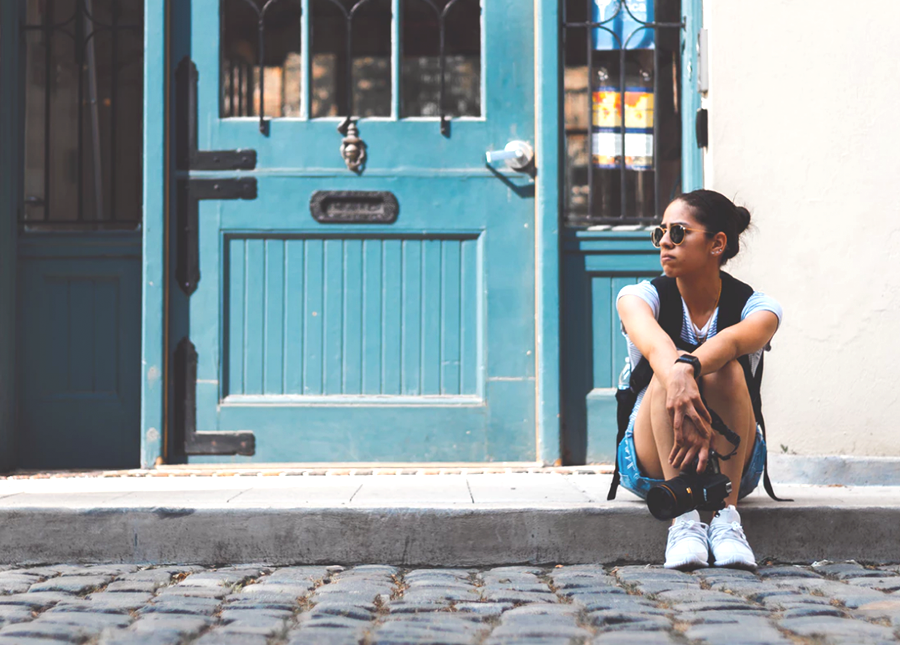 Most people, when faced with six figures’ worth of student loans, would not consider moving abroad. Better to bunker down, pay off as much as you can, and then you can go on a celebratory vacation a few years down the road — maybe in a decade, I was told by everyone from well-meaning friends to accountants to every financial advice article I could find. That didn’t appeal to me. So I moved abroad anyway, first to Quebec (don’t tell me Canada isn’t technically abroad until you try transferring Canadian money to your U.S. bank account), then to the U.K. And now I’m heading to France.

There are financial benefits to living outside the U.S. Healthcare, for one, is much much cheaper in other countries. Imagine not having to pay $100 to $200 out of your paycheck every month to be on a health care plan. Imagine then being able to go to the doctor, not paying a copay, and actually being able to afford medicine. Imagine getting pregnant and giving birth, and it costing you nothing in extra fees (minus what you pay in taxes).

But I learned — all the time, the hard way — that managing your student loans while living outside the U.S. comes with a fair number of challenges. Having these loans without a high-caliber bank account, that allowed easy international transfers, made it even more difficult. Moving and living abroad with a mountain of student loans is possible. It may even be advisable, so long as you keep these points in mind:

1. Choose your location carefully. If possible, pick a country where the currency is stronger than the U.S. dollar, so even if your salary is lower, you’ll still come out about even (or even better, come out ahead). This was my plan when I moved to the U.K. in May 2016, because as of April 2016, 1 British pound was worth $1.47. Fast forward to the Brexit vote on June 23, 2016, and that comparative advantage is pretty much gone.

If you’re moving somewhere with a weaker currency than the USD, make sure you’re making a very solid salary, otherwise meeting your monthly student loan payments will be near-impossible. Five years ago, I was offered a job in the Philippines, and I was very excited to go — until I learned I would be paid in Filipino pesos at a rate comparable to what other Filipinos were making. That wouldn’t possibly work for my financial situation, so I had to look elsewhere.

2. Get your accounts in order, before you leave. Resolving payment issues with student loan companies is a painful, blistering process, and that’s when international banks aren’t involved. If you’ve got any unresolved problems, tackle them straight on while you’re still in the U.S. and can run to your local bank branch at any time to speak to someone in person. Also, make sure to inform your bank that you’ll be moving abroad, so you don’t have the hassle of trying to provide proof of identity from several time zones away. Figure out what address you’re going to tie your American bank account to (I use my parents’ address) and then do it, well in advance of your flight.

Do not close out your American bank account. You will need it.

3. Check to see if your bank provides free international exchanges. In my experience, there are few American banks that provide this service, and they tend to require that you maintain a very high bank balance. If you don’t have a few thousand to spare (meaning, you work paycheck-to-paycheck, like most of us), that’s not going to work.

It goes without saying to watch your bank accounts like a hawk. If a fee looks suspicious, call the bank and demand an explanation. There are services out there now which aim to get around bank fees — notably TransferWise. It’s a great idea, but U.S. banks are finding ways of blocking you from using this service. My own bank told me they would only accept a TransferWise bank transfer if TransferWise wrote them a paper check, which would then sit in the bank’s main mailbox for three or more weeks, after which my bank would take around two weeks to cash it and deposit it into my account. If you’re on a monthly paycheck with monthly student loan payments, this won’t work.

4. Leave plenty of time between the transfer and your student loan payment. U.S. banks are behind banks in other countries when it comes to the speed of money transfers. While it takes less than 24 hours in Canada and the U.K., it can take up to five days for a U.S. bank to accept and deposit a transfer. Plan wisely, so that when your student loan companies do their automatic withdrawal, you’ll have sufficient cash in your account to cover it. If this means having a chat with your employer to change your pay date, do it. If your overseas employer can’t accommodate that request, then you’ll have to plan a month in advance.

An employer might even be willing to deposit your paycheck into your U.S. account. I worked, in Nova Scotia and Quebec, for a U.S.-based news company, and they were good enough to deposit my pay into my U.S. bank account, thus cutting out delays and payment transfer fees.

This arrangement worked for me because my living expenses in Canada were covered by my Canadian partner’s paycheck. If you’re single, it might be that you’d have to have your paycheck deposited in your U.S. bank account, wait for your student loan payments to clear, and then withdraw the rest in one transaction to deposit in your local bank account. Do the math — it might be worth it.

Fast forward to 2018, and I asked again. I was transferred to a manager, who begrudgingly admitted there was a way to pay directly from foreign banks. It meant I would have to notify the student loan company every month that the payment had been made via international transfer, but having to make one extra phone call is much better than paying £9.95 in outgoing transfer fees AND $25.00 in incoming transfer fees. And always, always use a free VoIP service for these calls.

6. Pay your bills. They will come after you. It’s very tempting to think that just because you’re out of the country with a new phone number you likely haven’t given to your loan companies that you can get away with not paying them. I fell into this trap. It doesn’t work. It wrecks your credit, it wrecks your finances, and it doesn’t make you feel great. Plus, whoever co-signed your loan will likely get swamped with calls, and that’s not fair to them.

Be proactive, be on top of your finances, and keep plugging away at those loans. Your credit and your mental health will thank you for it. In the meantime, enjoy your international adventure.

Jax Jacobsen is a freelance journalist whose work has appeared in the S&P Global Market Intelligence, Montreal Gazette, Mining Magazine, Global Trade Review, and other publications. She now lives just outside London, and is soon moving to just outside Paris.