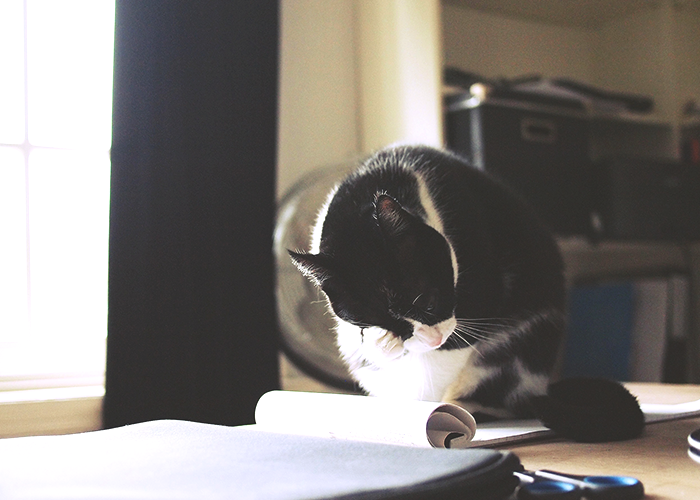 I love reading about productivity. So much so that it becomes somewhat of a problem — I’ll read articles about how to increase my productivity while putting off doing actual work. But I do honestly believe that increasing productivity should be a goal for anyone. Being overworked should not be glamorized, and we should all strive for better work/life balance.

Honestly, that’s easier said than done. It’s easy to get sidetracked with a fun conversation during the day, or get sucked into an internet rabbit hole, or find yourself accidentally paying more attention to your cat than your computer if you’re working from home. When that happens and throws off my day, I can’t justify not doing some work during the weekend or evening, or sleeping in a little rather than waking up early to catch up, especially if I didn’t spend my actual workdays as productively as possible. And because people have different ways of working, there’s never going to be a one-size-fits-all productivity trick. (I can get up at 7:00 a.m. and be ~productive as hell~ from my couch, sure, but don’t tell me I should have already been to the gym, showered, and had my hair blown out before I’ve even touched coffee.) I’ve been reading up on the best productivity tips and hacks to help you tackle this week — read on for some of my favorites! 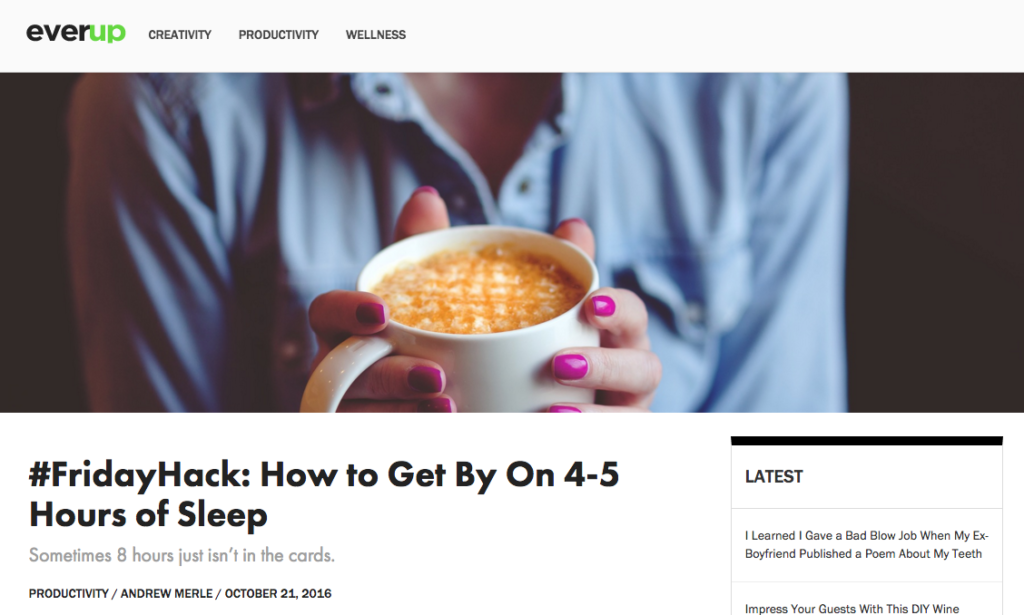 Nothing, to me, feels better than getting a full night’s sleep. But due to whatever circumstance — FOMO, Netflix, being kept awake by an animal, what have you — there are at least one or two nights each week when I get far less than my necessary eight hours. Writer Andrew Merle of Everup put together this awesome list of helpful tips to get you through your day on just a few hours of sleep, and hopefully just as productively as you’d be able to on a normal night’s rest. I am positively #ProNap, and I find that his tip on breaking up your day with some shuteye almost always works for me: “Allow yourself a quick afternoon nap. A short 30-minute nap has been shown to boost alertness and limit the effects of sleep deprivation.” 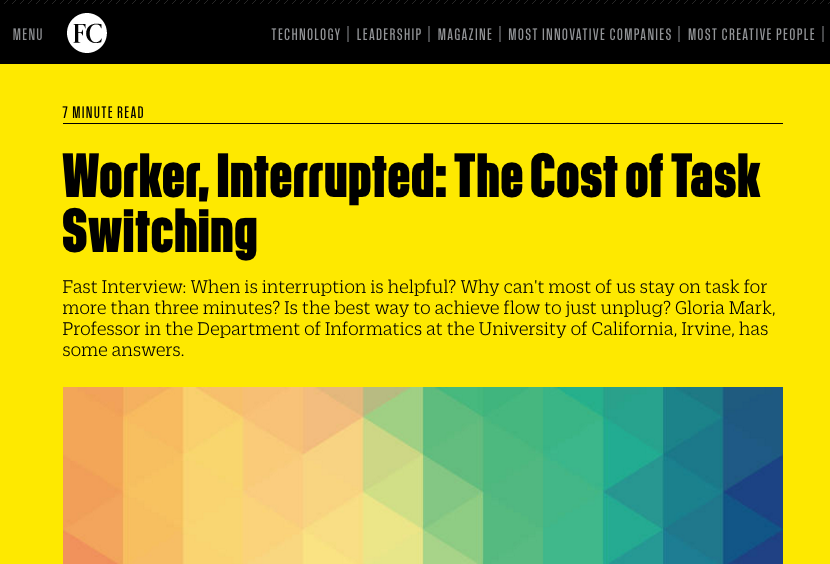 “Task switching” refers to interrupting your workflow on one task to focus, however briefly, on something else — multitasking, in a way. Fast Company conducted this great interview with Gloria Mark, a Professor in the Department of Informatics at UC Irvine. It’s helpful to know that multitasking may actually help productivity, especially if the tasks you’re switching between are related in some way. However, interruptions can be counterproductive if the tasks are unrelated in topic, as Prof. Mark says, “People have to shift their cognitive resources, or attentional resources, to a completely different topic. You have to completely shift your thinking, it takes you a while to get into it and it takes you a while to get back and remember where you were.”

3. Here’s The Best Time To Take A Coffee Break For Maximum Productivity 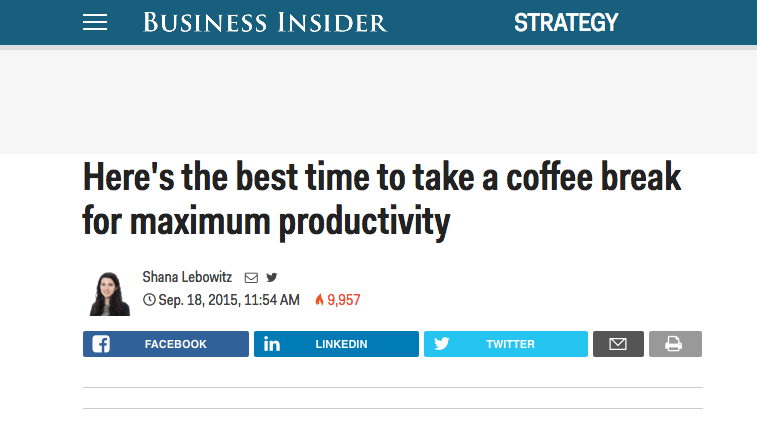 It’s somewhat unfortunate that the time we have to spend prepping for the holidays is also the busiest time of the year work-wise (we’re certainly feeling it in the TFD office!). And with the added workload comes one thing in particular: lots and lots of coffee. Shana Lebowitz from Business Insider argues why taking a break for coffee earlier in the day can actually be better for your productivity than putting it off until the afternoon. She also explains that a break doesn’t necessarily have to be non-work-related to have a restorative quality: “Just make sure you’re doing something that you like to do and you choose to do. In other words, making some headway on a work project you’re super-pumped about could be even more restorative than scrolling through your Facebook newsfeed.” So, if you need to take a break from an expense report to work on a fun piece of content that’s not due for a few days, by all means, do so!

4. Program Your Brain, Hack Your Way To Productivity 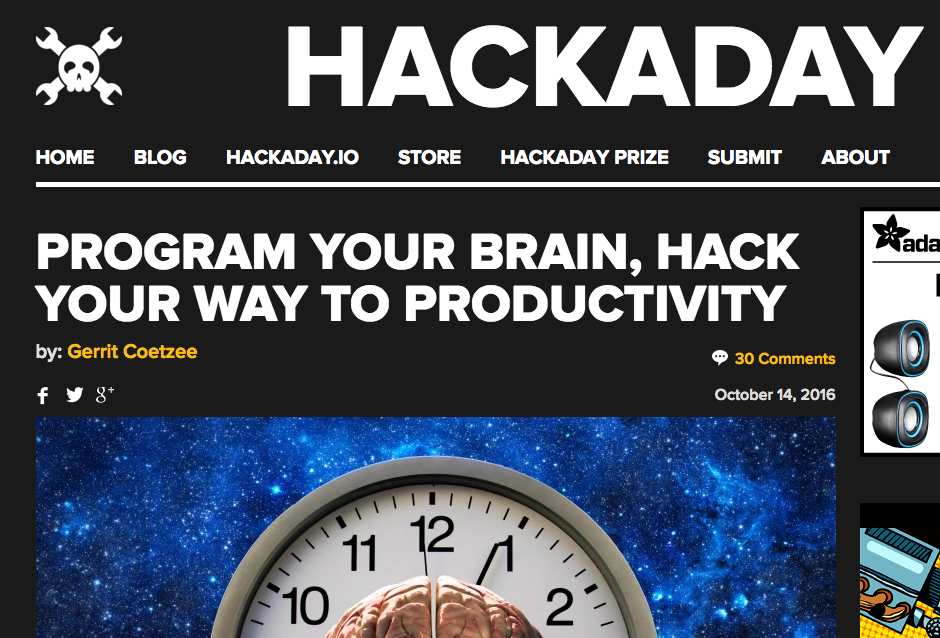 Gerrit Coetzee very helpfully summarizes the main points of three well-known books on productivity for Hackaday. One is The Power of Habit by Charles Duhigg. Coetzee writes that this book was “a bit of a revelation” in how he viewed habit formation: “The brain sees that you’re doing a task over and over again and just learns to do it. It keeps optimizing and optimizing this program over time. All a person needs to do is trigger the habit loop and then it will run.” It’s comforting to read that basically everything you do that seems second-nature — eating with a fork, taking part in a conversation — you learned to do by forming a habit, so even if it takes time, you can form new habits in the future. This could be anything even seemingly small to help boost productivity, like waking up earlier and actually making the bed.

5. Why My Team Banished Update Meetings 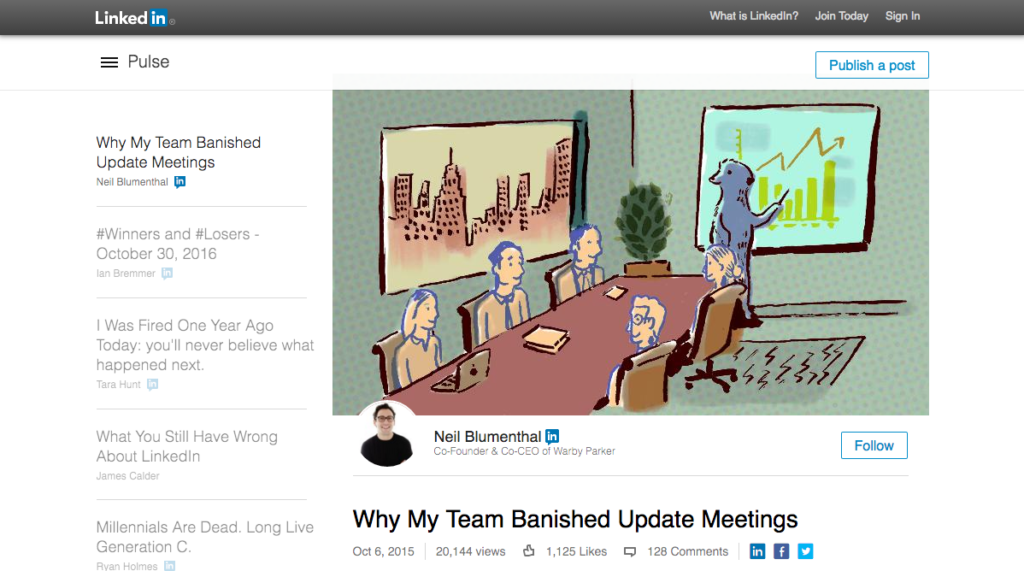 Neil Blumenthal, a Co-Founder and Co-CEO of Warby Parker, wrote this piece for LinkedIn Pulse last year. He discusses how he and his team worked to make meetings as productive and valuable as possible for everyone involved, which led to one thing: fewer meetings. Not only does this cut down on wasted time, but it requires putting rules in place to make everyone more present. For example, “By the time everyone convenes in a conference room, they are expected to have absorbed the material at hand and be ready for discussion and reaching conclusions.” If you aren’t in charge of managing meetings, this may be easier in theory than in practice. But, if you make it a point to prepare everyone well ahead of time for a meeting you’re leading, your coworkers may start following your example.

6. How I Decreased My Weekly Office Hours From 40-plus to Less Than 8 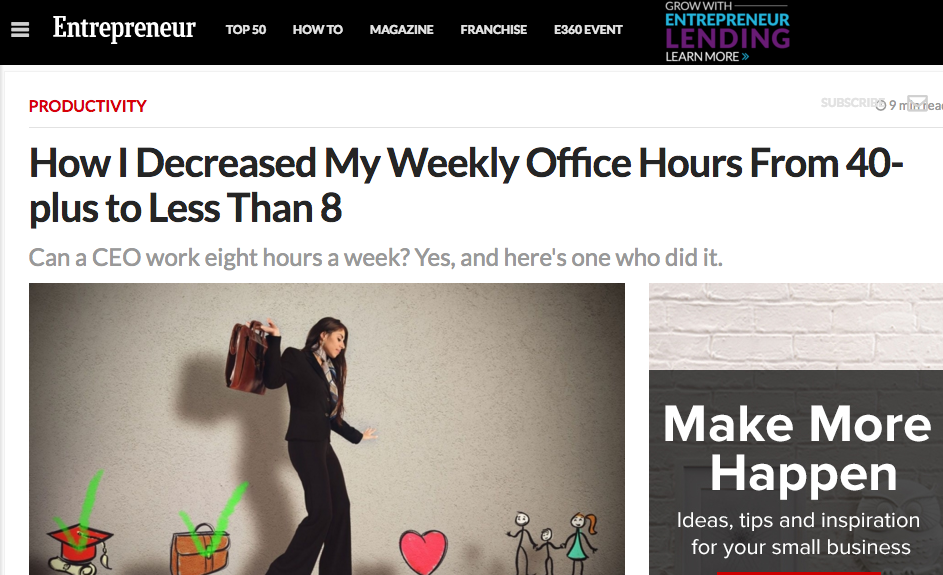 Okay, I get it — decreasing a workweek to just one full day’s worth of hours is going to be impossible for most people, including myself. But reading articles like this, wherein wealth management firm CEO Jeff Rose details how he took ideas from books like The 4-Hour Work Week and implemented them into his own business, are not only fascinating, but potentially really helpful. If you can cut back on time that’s wasted, you can feel good about spending less time working, because the time you do spend is highly productive. One of the ways he writes about decreasing his time in the office is streamlining his processes: “We started documenting our processes. Eventually, I learned I could make my life easier by streamlining processes I did over and over. A tool that I stumbled on, Sweet Process, helps you create processes for everything in your business.” Be sure to read the rest of his tips in this Entrepreneur article to give yourself some inspiration!