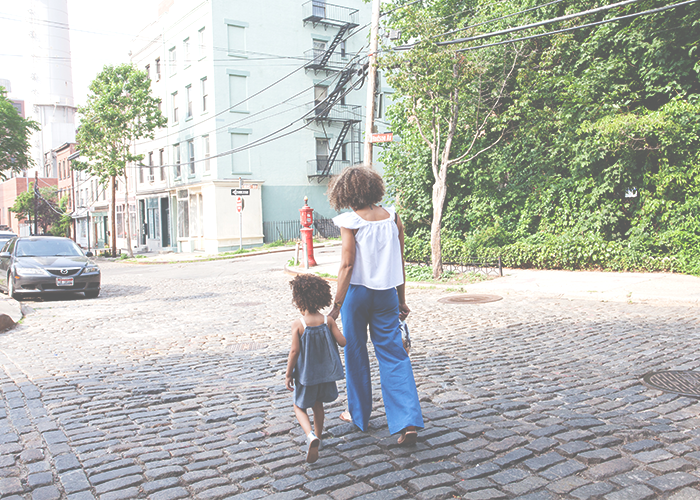 The “city versus suburbs” debate might be as old as parenting itself. While some people subscribe to the belief that the ‘burbs are the best place for raising children, many young parents are proving that it’s possible to raise a family in a big city. However, it’s certainly no easy task. City living is more expensive, and when you’re spending money on a child (or two or three) in addition to yourself, the costs can mount quickly. I spoke with seven moms who are currently living in cities throughout the country. Here’s what they had to say about the real cost of raising a child in a big city:

“My boyfriend and I both grew up as inner-city Irish Catholics in Southie. Scrimping, saving, and pinching pennies was ingrained in us, and so was the idea of getting married and buying a house before having kids. When my boyfriend’s sister started having kids, he and I had one of those conversations that went on so long that pages flew off the calendar. Did we want our kids to play with their cousins, or get babysat by them? Did we want to serve meals to each of our 300 relatives at a big wedding reception, or be able to afford to move out of our one bedroom apartment? One white dress, or an endless multitude of tiny footsie pajamas? We watched the real estate market for three years before a foreclosed fixer opened up in our town that we could afford. We jumped at the opportunity and didn’t waste a minute starting our family. Staying in the city meant losing my ‘dream wedding,’ but when I look at our daughter and the home we worked hard to buy, I’d hardly say I missed out on anything.” — Jen, Boston, MA

“It’s hard to know what to expect financially when you are preparing to become a parent. I’m thankful that some of the items I estimated as being super pricey (hello, diapers!) weren’t as much as I originally anticipated. However, there are always those unexpected costs that pop up. One of the biggest unexpected expenses for our family has been costs associated with traveling. I have always been a ‘carry-on only’ flying gal, but you need to take so much more stuff when traveling with a baby, and those checked baggage fees add up quickly! While this may not seem like a ‘city expense,’ for many, living in the city might mean living farther from family. When we are not traveling, I have noticed that our grocery bills are slightly higher as well. Dinner out at a nice restaurant is less than enjoyable with a tiny tot, so we have made an effort to cook more often at home. So, while we’re saving on entertainment and babysitting costs, Publix and Target get a larger portion of our income!” — Becky, Naples, FL

“I live in the Chicago area with my three boys and my husband. When people think of kids, I assume they already factor in the cost of clothing, groceries, car seats, etc. And all of that definitely does add up, but that’s all basic stuff. The real (unexpected) costs come when you venture outside your home. Once you get out the door, there are costs for almost every activity that you might do with your child. Kids’ indoor play places usually cost $10 per child, while higher-end places can run closer to $15 or $20. Imagine that times three (and heaven forbid you brought their friends along!!). Just the other week, I spent $50 for five kids to jump around for an hour and half. Costs of places like Legoland, Six Flags, and even the local annual fair can cost a family of five a small fortune. The saving grace — and best cheat that my family has found — is memberships. For example, if we want to go to Brookfield Zoo twice in one year, it’s going to cost over $100 for parking and entrance fees. So we’ve made it a habit to buy the annual membership for $130, and we get there as often as we can.” — Ali, Chicago, IL

“I’ve been pleasantly surprised at all the wonderful free activities at our fingertips — playing in Central Park, playground hopping, and even some of the museums are our go-to activities. However, for every free activity we do, there seems to be an unexpected cost that pops up during the day. For example, when it starts to rain and I decide I don’t want to walk the seven blocks to the train with both kids, we call an Uber. Those Uber rides add up quick, but sometimes it’s just so much easier than dragging a stroller up and down subway stairs.

There’s also a lot of pressure to get my children involved in several structured activities, even as toddlers. There are music classes, baby gym classes, Spanish classes and even trapeze classes available for children and they all come with a hefty price tag. It’s easy to start believing that my child needs those classes because it seems like every other New Yorker’s three-year-old is studying a second language or being groomed for an Ivy league college. It’s just a competitive environment up here – even for toddlers! And of course, there are those Friday nights when we plan to grab a cheap burger dinner and when we are walking home my husband says, ‘Did we really just pay $80 for burgers and fries?’ Only in NYC, right?” — Ashley, New York City

“My husband and I are raising our son in Jersey City, New Jersey, where we’ve lived for the last five years. I think the biggest financial challenge we face raising our son in the city is paying for quality daycare. It’s basically like having a second rent if you think about it. But, being that my husband and I both work full-time, it’s really important to us that our son has a great place to learn and grow during the day. Fortunately, there are plenty of other areas where we can save; we definitely take advantage of our coupons each month. In the end, I think it’s worth it to live close to our jobs and to raise our son in such a fun and interesting place.” — Kristen, Jersey City, NJ

“There are so many pros and cons of being in a big city like DC. I love being able to just step outside and take my daughter for a walk without the hassle of getting in the car. In fact, I rarely drive at all anymore, so I’m saving money on the gas that I’m not purchasing. However, when I do elect to use public transportation, it can be such a production. I find myself exhausted from one trip on the metro. I’m also a single mom, so until my daughter is a little bit older, I anticipate that almost anything we do outside of our apartment will be bit of a production.” — Natalie, Washington, DC

“My family was skeptical when my wife and I elected to raise our children in LA, but we met there and we both love the city. Neither she nor I could imagine moving to the suburbs. But, of course, there are sacrifices. We have to be extra vigilant with our kids, and they don’t get as much freedom as kids who live in the ‘burbs might. We don’t let them play outside without our supervision, and when they get a bit older, it’ll be hard to let them walk to friends’ houses on their own. It’s not even a matter of safety, but rather the traffic. Cars go 50 or even 60 on our street, and we worry about our kids running out into the road. And of course, LA is expensive like any city. While it’s tempting to eat out or spend a day at the beach every weekend, we have to try to treat those activities as ‘special occasions’ because the costs can add up quickly. Before my wife and I had children, we did all of our grocery shopping at bougie health food stores, but now we love our Costco membership!” — Shauna, Los Angeles, CA