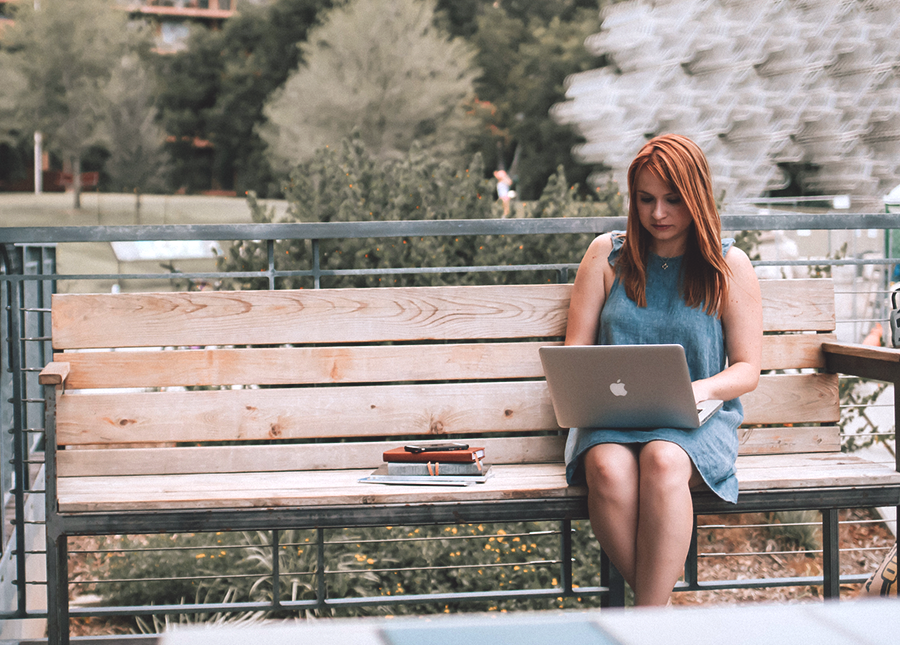 With a lot of degrees programs, it is hard to know what they will actually translate to when you enter the ~real working world~. Often, we go into a certain major with at least a little bit of an idea what we would like to do with the degree post-grad — and other times, we go in knowing that the degree’s real-world value is vague, and liking it that way.

I was definitely the latter of the two. I was told over and over during my time as a communication major that my degree was sort of a question mark. (I also was pretty consistently reminded that my major was the best one for sports-players to go into because it didn’t require a lot of work — lol.)  Personally, I had a really fuzzy view of my future as I looked forward, and in spite of different suggestions from professors and professional mentors, I was always a bit unsure of what my post-grad work life would look like.

And I know it isn’t just me — a lot of other people are like this. In fact, almost every post-grad I know in my personal life had no idea  how they would make their degree translate into the real world — but the funny thing is, they all did. I’ve had to figure out how to make my business/organizational communication degree work with me. I had to figure out which parts of my field I was interested in (for me, it leaned more towards media than working in HR or management) and pitch the skills I’d gained throughout the course of the degree program as my credentials, rather than just saying, “I am qualified for this job because I have a degree in the field you are hiring in.”

1. “You know that my major was also communication. I wasn’t sure which com specialty to pick, but I eventually decided to focus on organizational, because I knew I had at least a little interest in management, and thought I’d take classes in that at some point. But I ended up finding my internship in event planning, which really did draw upon a lot of the skills I acquired during my time as a student, and quickly became something I realized I was passionate about within my academic field. I was hired by the company I interned for, and now work full time as an event planner, which isn’t quite glamorous as it sounds, but it is really fulfilling and I feel really comfortable and confident in my work every day, because I learned so many relevant skills from my program at school.” — Isabel

2. “I was an English major, which is the quintessential ‘wtf does anyone do with that’ major. I wasn’t sure what I’d do with it, either. I actually had no real interest in reading or writing as a career, and that is essentially all you do as an actual English major during school.

“Post-grad, I was still unsure what to do with the degree, so I decided to become a teacher. It was fun for a bit, but I realized it wasn’t fulfilling me, and I only really went into it because it was one of the only paths I thought I could take. Eventually, I started freelancing as a copywriter, and then working as an editor, and I fell in love. My personal passion for words and grammar paired well with all the skills I picked up during my time as an English major.” — Erin

3. “I decided to study biology with the intention of possibly becoming a nurse after. Turns out, I wasn’t quite cut out for medicine, and biology without the intention of going into a medical field can kind of feel like a vague major. Like, okay, I’m gonna be a biologist! What does that even entail? I eventually became a teacher, and after that, I decided to go back to school so I could be a biology professor at my old university. I realized that I much prefer teaching to anything else, and I previously had no interest in teaching whatsoever, so I’m really happy my degree felt ‘vague’ to me so I would find this path.” — Liz

4. “I studied photography in an art school, which obviously makes sense if you’re going to be a photographer, but I did not become a ‘photographer.’ I did, however, become an assistant creative director — my artistic eye and experience working with a lot of digital media and artwork gave me the right credentials for a job I didn’t even know existed.” — Kendra

5. “I was a theatre major, obviously because I want to become an actor (and still do, and still am working towards it, but we’ll see). In the meantime, I obviously have to work in other ways, but I didn’t want to be a cliché and be a server or something else random on the side — I really wanted my degree to be useful even if I don’t end up doing the thing I want to do. I ended up getting a job at a local theatre working in general operations, and then eventually when the company was hiring someone to do set design, I jumped at an opportunity to prove myself (without experience other than a few classes I’d taken) and ended up getting the job. It is a good job and it is related to the field I want to be in. I can only hope I’ll get where I want to with acting one day, but it is nice at the very least to be close to what I love.” — Nick

6. “I studied electrical engineering not knowing it would lead me to a career in IT, but I am very happy it did.” — Sophie

7. “So this is weird because I actually did not take the more lucrative path, but the one that made me happier. And it still relates to my degree obviously. I went for computer science, and while I knew I could be a pretty high earner with such a skill set, I really went into it because I had a computer class teacher in like middle school that inspired me and brought out all of my nerdiness. I went on to become an educator, and I teach computer class and robotics class in a high school. I absolutely wouldn’t change it, but it isn’t totally what I expected to go with my degree.” — Ben