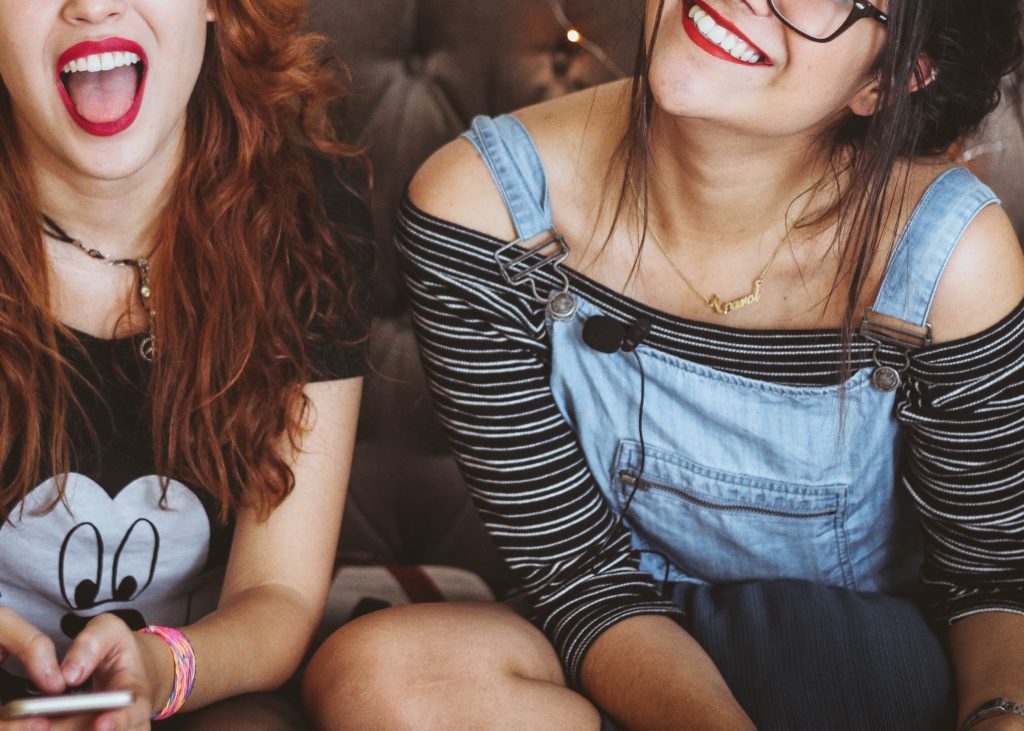 The early 2010s were a noisy time for fashion. Namely, logos and brand names were splashed across as many inches of fabric as physically possible. As a teenager, I longed for the items my friends paraded around the school playground in, the names of Hollister, Superdry and Jack Wills peeking out of the popped collars of neon polo shirts. If you didn’t own the top brands, it was painfully visible.

It’s important for me to clarify that I didn’t go without these things because my family was unable to provide them for me. They simply knew better than to act on the trendy whims of a teen who, while mindful of how fortunate she was, often found herself caught up in the high school politics of haves and have-nots, terrified of being viewed as the latter.

I look at this list of things I once asked for now and am shocked by the picture it paints of my younger self. I see someone fickle, a bit entitled, and plain naïve — a far cry from how mature and level-headed I thought I was at the time. I also see someone lost in the lives and possessions of others. Being so desperate to construct an identity of my own, I thought I could do so by taking threads from all of the people I envied and braid them into something I could pretend was me. The things listed below were just desired embellishments atop my deeper insecurities, branded items that masked (but didn’t really) how inadequate I thought I was.

But by not giving in to whatever fad I was convincing them was essential for me to have that month, my parents taught me some really valuable lessons — both about wants versus needs, and life as a whole.

I truly cannot believe that these studded monstrosities were once at the top of my wish list. Ugg Boots were — of course — one of the most iconic secondary school status symbols, but JIMMY CHOO ONES? You’d be the talk of the school for weeks, the only thing any of us wanted. I used to get home from school and search these on the internet, not very subtly leaving the page open on the family computer in the hopes that one of my parents would see it and their fingers would slip onto the “buy now” button. Thankfully, they never did, and I learned that just because something is popular doesn’t mean it’s actually nice.

2. A Blackberry (And Every Other Hot New Phone)

Was I a professional woman juggling a busy schedule? No — I was thirteen and had no other use for such a device than to put my crush’s name as my BBM status. So why did I want one? Because everyone else had one. Following the crowd was against my nature as a person, but the fear of being singled out as “the one who didn’t” was a far worse alternative. What I’ve learned now? Literally no one cared that I didn’t have the hot new phone. Not a single person. I assumed what other people thought and actually imposed those expectations on myself. The lesson: to get out of my own head.

3. A Head-To-Toe New Outfit Every Time I Was Invited To A Party

The fear of being known as an “outfit repeater” was real, and because I didn’t get invited to many parties (go ahead and sob for me), I felt the need to impress people even more. That meant pleading for not just a new dress, but new shoes, jewelry, and bag every time a friend’s birthday came around. Instead, I learned the joy of loving what’s in your closet so much that you can’t wait to wear those items again and again.

This iconic British brand never made it to the U.S. (your loss, truly), but they were the absolute staple of every single teenage girl of the early 2010s — besides me. Their gaudy zebra and cheetah prints emblazoned with their enormous “I Heart PB” logo summed the 2010s up nicely. While at the time I felt like the only girl in school not carrying her geography books in one, it has become the perfect cautionary tale against buying into trends that won’t stand the test of time. When researching for this piece, I saw the exact bag I longed for being sold on second-hand site for £6, which is still probably, more than it is worth.

5. Products That I Convinced Myself Would Make Me More Desirable

One of the first things I remember asking my parents to get me was a perm. No, I was not a teen in the 1980s. Yes, I dreamed (and still do, honestly) of having the kind of cascading curls that I could give a flirty tuck behind my ear. My own hair was thick, cut into a heavy lob that, if injected with curls, would have certainly given me a poodle quality. And then I became obsessed with the idea of dying my hair. Despite having what adults would always tell me was a “beautiful natural brown” color, I longed for something exciting and different. With the money from my first job, I would later slather four boxes of bright red, drugstore dye over my hair in the hope that it would turn out like Rihanna’s in the “What’s My Name” video.

These were my idea of solutions to the eternal teenage struggle of getting someone to fancy you. What they actually did was create more problems, trapping me in a constant cycle of self-improvement I thought I could remedy by purchasing every beauty product under the sun. Through these various potions, women and girls are sold better versions of themselves as brands capitalize on their insecurities. While there is nothing to moralize about a woman’s decision to adhere to these messages or not, I wish I could say that I’ve learned the lesson to ignore it. But I can’t, and I’m left with an increasing sadness that girls as young as I was — and now younger — are so controlled by the fear of not being enough to look at.

The system in the U.K. works like this: if the dentist considers your teeth bad enough, you can have braces for free on the NHS (National Health Service). If not, you’ll have to get them privately — which costs. A lot. I cried three times in three separate orthodontist’s offices before I accepted that I wouldn’t be eligible for the NHS treatment and could not afford the private one. The giant gap between my front teeth and crooked bottom row were my biggest insecurities, and a point of relentless teasing.

Even now that the gap has almost completely closed up on its own, if I were to have any cosmetic enhancement, it would still be to fix my teeth. But not getting them done taught me a certain amount of neutrality towards my appearance. If someone thought my teeth were ugly, I learned that that would just have to be fine. Beauty is such a nuanced concept used to hold women to impossible standards on both ends of the spectrum. The woman too concerned with her looks is shallow and shouldn’t reduce herself to just physicality, but the one who casts aside these societal expectations is lazy and should value herself more by trying to make herself prettier. I realized there was no way to win so, at least in regards to my teeth, I stopped playing the game.

Just when you may have been thinking that my childhood couldn’t have been more typical middle class… But yes, I had a phase of pining for a horse. Being sensible people, my parents said that I could have riding lessons instead. I had five and then stopped, and haven’t ridden a horse since.  Acting purely on a whim — especially one that has such lofty consequences e.g. owning an ACTUAL HORSE — is rarely a good idea.

To paraphrase Ariana Grande, what taught me patience and pain at the time would later instil some of the most important values that make me proud of the person I’ve become since making this list.

The sense of individuality I once longed to discover I’ve now found, without acquiring any of the things I thought I’d need in order to find it. I’m not professing to be perfect, of course. Like anyone, I still get sucked in and buy things for myself I later regret, but at least now I won’t end up with a horse-sized hole in my (or my parents’) bank account, and an actual horse in my back garden.