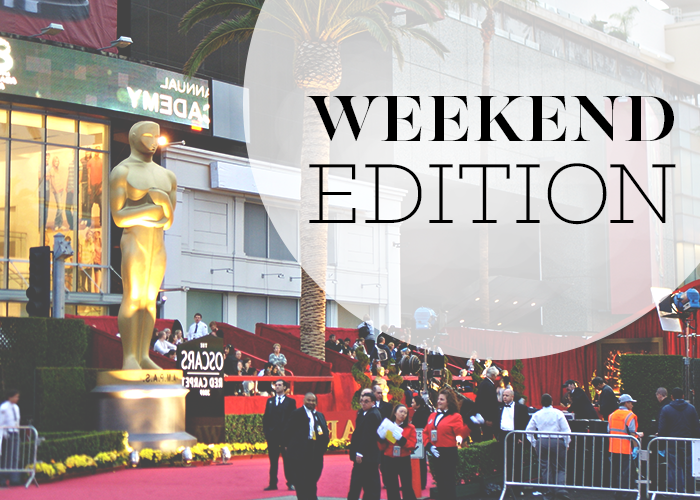 Unless you’ve been living under a rock recently, you’ve probably heard about the controversy over this year’s Academy Awards, or Oscars. Once again, people are left feeling frustrated with the lack of diversity among nominees, especially with these performances being left out (although I admittedly haven’t seen them myself). It’s difficult, to say the least, for people to watch so many talented individuals get overlooked despite their phenomenal performances. I used to always mindlessly watch the Oscars each year, mostly because I enjoy watching the fashion on the red carpet (which is boring AF to a lot of people). However, last year’s controversy coupled with the fact that nothing changed this year, has left me feeling a lot more bitter about the whole affair.

The lack of diversity in Hollywood is, sadly, not a new problem. In addition to it, this year brought increased coverage of the rampant sexism and unequal pay for female actresses as well. In my opinion, it casts a gloomy shadow over the whole thing, and I’m curious to see how host Chris Rock will address it on Sunday night. I’m not going to even pretend that I know enough to sit here and dive into the nuanced discussion needed to properly understand the situation. Instead, I felt like it would be really useful to provide links and resources that you can look into in order to better understand the different viewpoints and perspectives on the situation. Check out these various articles, radio segments, and write-ups that express sentiments across the spectrum. Hopefully, it will give you greater context and insight into the discussion, and it will help you formulate your own opinion on the issue. Read on below!

1. Oscar Nominees Discuss Diversity In Hollywood Amid The #OscarsSoWhite Backlash 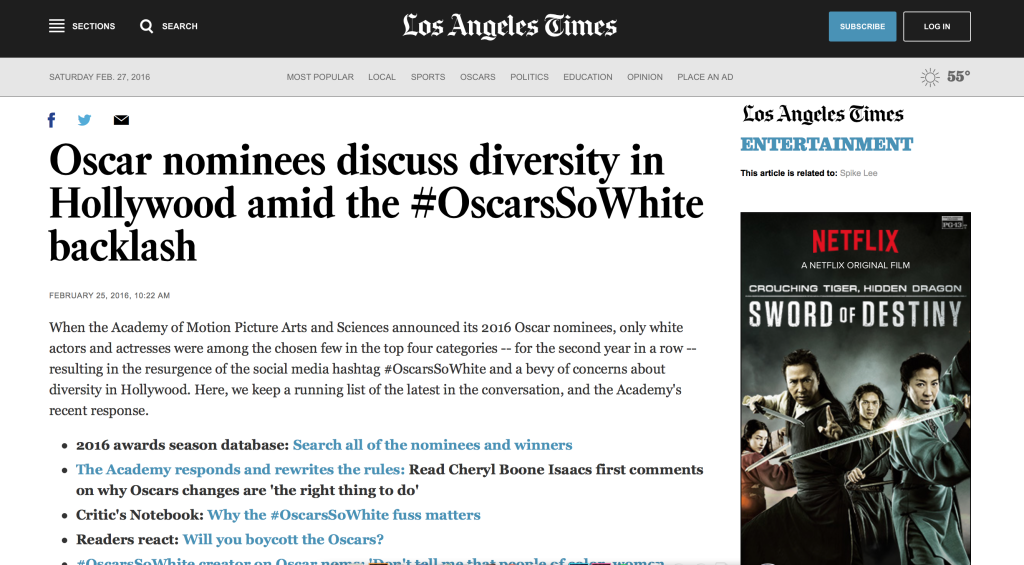 The LA Times provides us with a great resource in the article linked above. They continue to track the story and update their page with links out to celebrity twitter accounts, interviews, and articles about the #OscarsSoWhite controversy. They cover reactions from Oscar nominees, musicians, directors, screenwriters, and even congressmen, which provide a very comprehensive understanding of the conversation that continues to take place.

2. Everything You Need To Know About The Hollywood Pay Gap 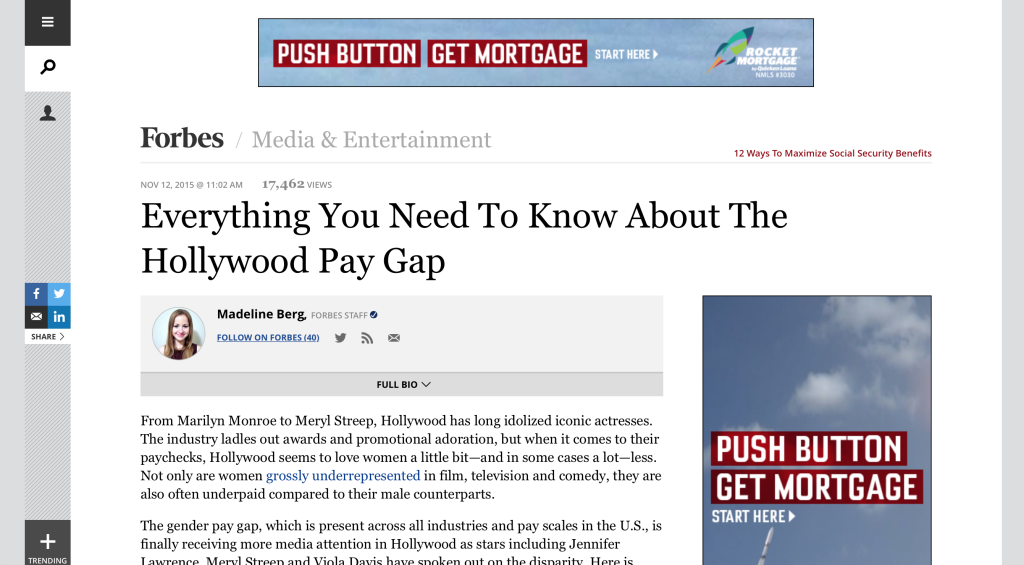 This article does an excellent job at gathering first-hand accounts from individuals across different mediums who have experienced pay inequality in their work. It illustrates the point that women are not only underrepresented in film and television, but they’re underpaid compared to their male counterparts. It’s a problem that exists at nearly every professional level (and obviously not just in the entertainment industry), and shows how much work still needs to get done to get women on equal footing. Author Madeline Berg quotes Alan Horn, the chairman of Walt Disney Studios, when he says, “Audiences have proven that there’s an appetite and a market for dynamic female leads and female-driven stories, and as an industry, we have a responsibility to create those roles for women and compensate them accordingly.” (Yas.) The article then presents data showing gender breakdowns which provides facts you need in order to understand the gravity of the situation and how we can advocate to change it.
3. The Women Of Hollywood Speak Out 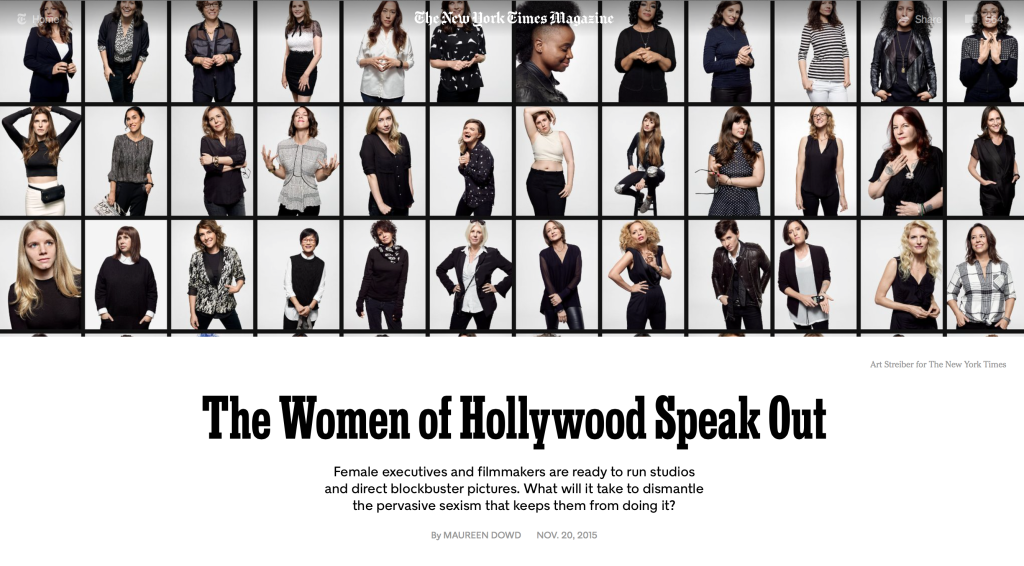 It was really great to see this article get posted on the NY Times website, and I liked how it brought together a diverse set of voices to talk about a shared experience. They’re all women, all involved in Hollywood in their own way, and each of them brought a unique perspective to the conversation. It’s honestly crazy to think how pervasive sexism can be in an industry that receives so much media coverage — one would think that that level of discrimination wouldn’t be able to thrive there, but thrive it does. The article shows you specific examples of the way each of these women have experienced sexism in their own way and is definitely worth a read. Author Maureen Dowd writes about the hard facts of the industry saying, “The most wildly lopsided numbers have to do with who is behind the lens. In both 2013 and 2014, women were only 1.9 percent of the directors for the 100 top-grossing films. Excluding their art-house divisions, the six major studios released only three movies last year with a female director. It’s hard to believe the number could drop to zero, but the statistics suggest female directors are slipping backward.” Be sure to check the article out in full!

4. #OscarsSoWhite Controversy: What You Need To Know 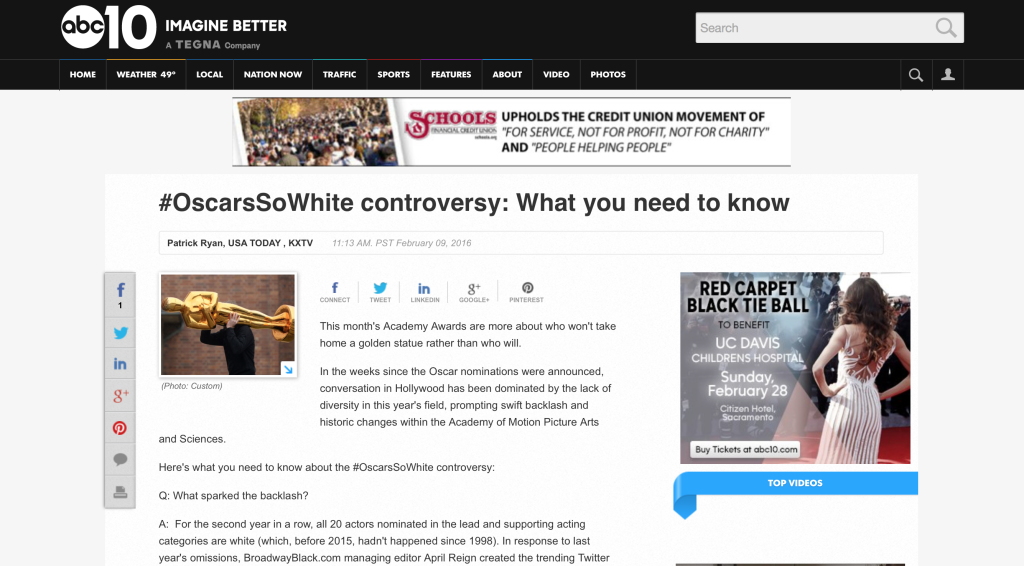 This article is worth reading because it provides a comprehensive timeline of #OscarSoWhite events, so you can better understand the controversy, and what it means on a larger scale. The article takes you through a number of questions such as, “What sparked the backlash,” “How diverse have past years been,” and “What changes are being made.” It’s a great Q & A style format that makes it easy to address a lot of questions you might have with easy-to-understand direct answers.

5. Equal Pay Revolution: How Top Actresses Are Finally Fighting Back 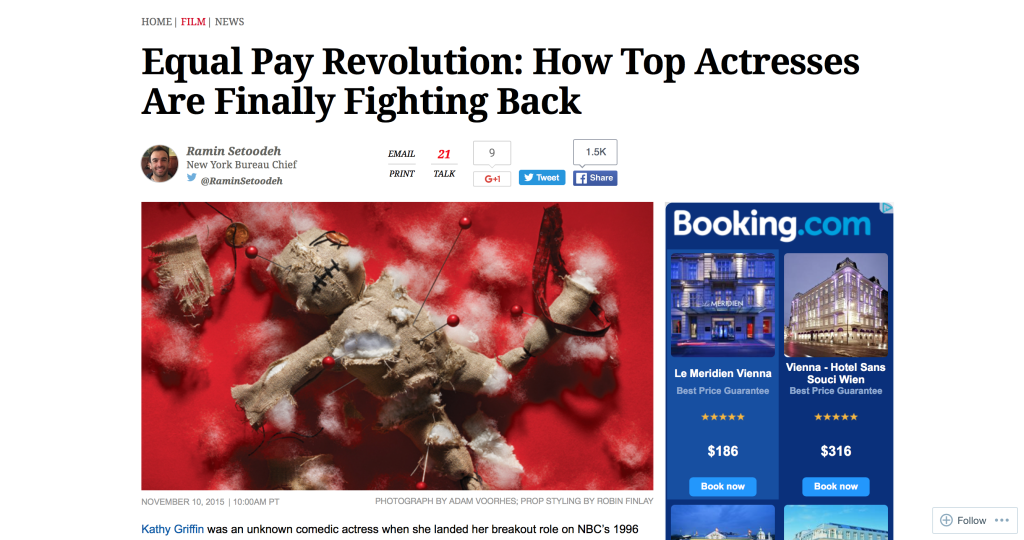 While the issue of Oscars being so white is obviously problematic, the issue of unequal pay for female actors is another topic worth reading more about. Even though the issue here is one that involves paychecks in the millions of dollars (and thus an eye-roll worthy topic for some), it shows how sexism knows no bounds and permeates even the upper rungs of the professional pay scale. It’s definitely worth a read, and the article will give you an insight into how these actresses are taking specific steps to change the status quo. 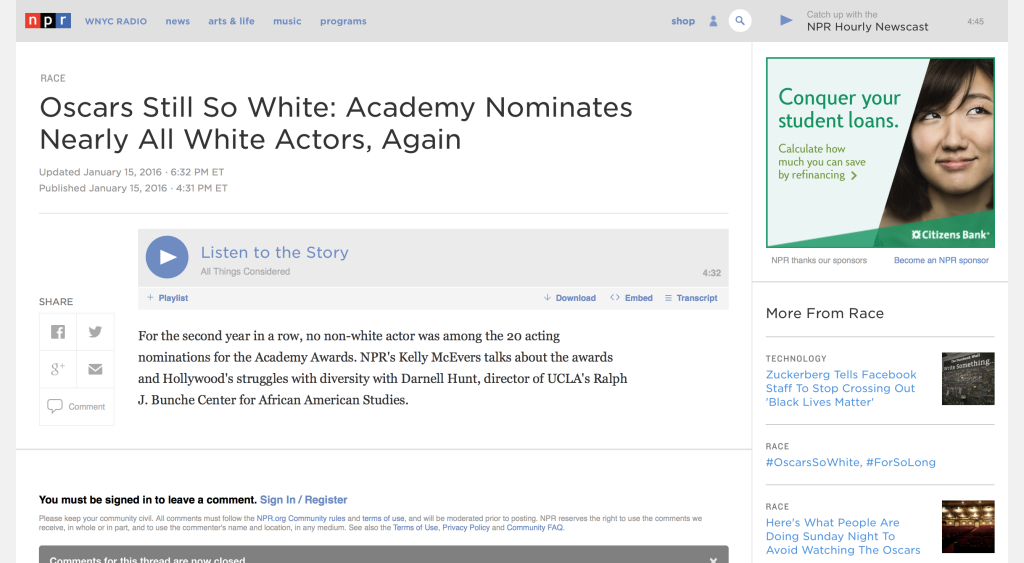 The other day, I heard this segment on WNYC which introduced a man named Darnell Hunt. Darnell is the director of UCLA’s Ralph Bunche Center for African-American Studies, which produces an annual report on diversity in Hollywood. When host Kelly Mcevers asked Darnell whether or not he was surprised by the lack of diversity in this year’s nominations, he replied:

“I was surprised but then I wasn’t. Of course, it’s the second year in a row. We’re talking about an Academy that’s overwhelmingly white, overwhelmingly male – 93 percent white, 76 percent male, average age, 63. People are voting for things that resonate with their experiences and, unfortunately, it’s too narrow a slice.”

The interview continues to break down the numbers, and it explores the reasons behind why the Academy itself is to blame for the problems we see coming up again and again. Definitely worth a listen. 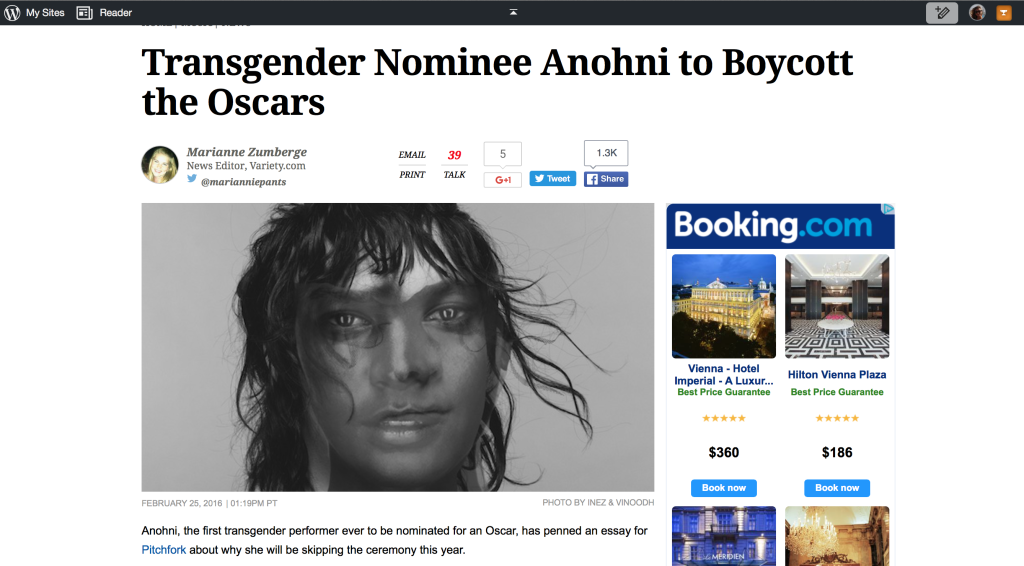 Chelsea actually told me know about this one (I had no idea that the issues at the Oscars ran this deep). Anohni, the first transgender performer ever to be nominated for an Oscar, was apparently snubbed from performing her song at the ceremony due to “time constraints.” She penned an eye- opening essay which illuminates some of the details surrounding her experience. She writes,

But if you trace the trail of breadcrumbs, the deeper truth of it is impossible to ignore. Like global warming, it is not one isolated event, but a series of events that occur over years to create a system that has sought to undermine me, at first as a feminine child, and later as an androgynous transwoman. It is a system of social oppression and diminished opportunities for transpeople that has been employed by capitalism in the U.S. to crush our dreams and our collective spirit.

You can read the entire essay by following the link above. She really does say some powerful and thoughtful things about what the Oscars symbolize and why she has chosen to boycott them. Give it a read!

To be completely honest, in the past, I’ve done a really poor job at keeping myself informed when it comes to understanding the issues surrounding big award ceremonies like this. However, this year I feel compelled to follow Oscars coverage with a more well-rounded and informed understanding of the problematic elements that exist.