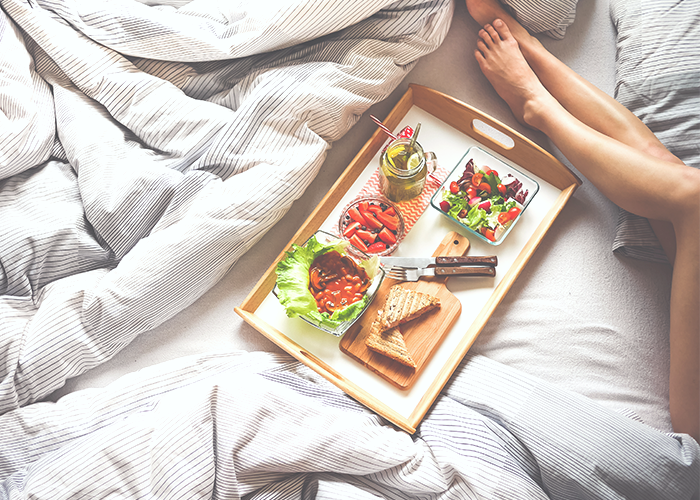 When it comes to “growing up poor,” it’s often hard to talk about our own experiences without relativizing and putting a lot of caveats on the story. For many of us, our childhood experiences with poverty were not dire, were not life-or-death, and did not result in things like hunger or homelessness. Or perhaps we changed social classes during childhood, even multiple times, which makes no one experience feel totally valid. It’s easy to brush off our stories as “not that bad,” even if they deeply impact who we are as adults and how we view money.

For me, the truth is that until I was about 11 years old, I experienced growing up seriously-but-manageably poor. We never went hungry, but we had very few things beyond necessities, and even as a child I was very aware of our socioeconomic status. My parents did everything in their power to compensate for it and make sure I had a great childhood (I did), but experiencing that, and then experiencing being middle and now upper-middle class, will always have a lasting impact on how I view and handle money. Overall, I would say that I’m grateful to have had all of the socioeconomic perspectives that I have, but I also know it makes some of my money behaviors and thoughts less-than-healthy.

To learn more about the ways childhood poverty impacts adult money emotion, I spoke to nine TFD readers who grew up poor about the thing they feel most guilty about spending money on now.

1. “Snack foods. We never had anything prepackaged in my house growing up — everything was bean soups and stewed cheap meats and day-old bread — so I still feel insanely guilty getting anything ‘fancy.’ I do love cooking, and my mom is an awesome cook who made being poor not feel so bad, but just the other day I spent 30 minutes circling a Trader Joe’s with a roll of pumpkin cinnamon rolls and finally put them back out of sheer guilt.” – Natalie

2. “I grew up poor (although had wonderful parents who made sure I never wanted for anything, ugh they are so great) and now I feel guilty any time I spend money on myself, even ordering in dinner when I could make something at home. I never feel bad spending money on other people though, which seems weird. Is that weird?” – Emmy

3. “MANICURES. I get a gel manicure every 2-3 weeks and it’s absolutely a splurge, but one that I factor into my budget because the ritual and having nice nails is important to me. However, sometimes I’m overcome with a huge amount of guilt for spending money on something so frivolous and temporary that my mom or I could not afford when I was growing up. Especially something I could do on my own (albeit a lot less successfully).” – Katherine

4. “My family’s wealth level when I was growing up could probably be accurately described as ‘just above homeless,’ so I would say most things make me feel at least a twinge of guilt, but not any specific purchase. The reason is that I currently help support my parents (my partner and I make a combined income of $130,000 in a city where that gets you very far), and so basically any time I do something ‘extra’ with my money, I feel like I could have sent them a bigger check that month. Currently I give them $1,000 a month, which they use towards their rent, but sometimes I give them a little more, which they put towards savings. It’s probably bad psychologically to go straight from being the child to supporting your parents every month, but I’ve never known any other way.” – Paulina

5. “Cosmetics – I know it’s irrational, I know we oughta take care of our skin w/o question and I do but I still can’t make myself to buy super expensive stuff for me that my mom can’t afford for herself. I always find myself looking for organic options available in my kitchen as a substitute for face packs & hair packs and other such stuff. And it does work fine btw :)” – Richa

6. “I’m sure almost every email/post you receive on this subject will start similarly…I feel incredibly uncomfortable saying that I grew up poor. There was always food on the table and a roof over my head…I had a great childhood and I have a great life. Our two close family friends were in the same line of business as my us, but for whatever reason (certainly not lack of hard work on my parents’ part) they always made a great deal more money than us. Growing up seeing the toys, clothes, gadgets, and vacations they got made me and my sister push any longing or sadness deep down inside, it was already tough enough for my Dad.

So things weren’t bad. But there was more of a sense of overhanging doom that comes with A.) Being in debt B.) Not being able to pay our bills C.) Not being able to experience certain things or purchase anything beyond the necessary (food, clothing, etc). My parents didn’t have health insurance until two years ago. If my dad had fallen off of a ladder or a roof our main source of income would be gone (my mom runs his house-painting business). There is nothing more painful as a child than seeing a parent in distress over finances. It makes you feel powerless and sick to your stomach. As kids, my sister and I brought our piggy banks to my parents once in an effort to help and they both cried.

I stay at home, I don’t go out much, and even when I had a full time job, I was acutely aware of what I was spending every time I “went out with friends” even for coffee. I HATE spending money on clothing and my wardrobe has stayed the same, save for a few new professional pieces, since my teenage years. I laugh at the thought of going on vacation and never have. My family never has, besides a trip to Disney that my great uncle and aunt helped pay for. I don’t travel. I somehow missed the boat on having a close circle of friends who invite me to their weddings or to be IN their weddings, and I’m selfishly glad. With all this being said, I was able to save up for three years to put a several thousands of dollars down towards a car purchase. The car is new-ish, 2013, and my old 1994 Honda was close to breaking down on the side of the parkway, and I feel safer while driving now but I still feel guilty every month when I pay my car bill.

I don’t think making any amount of money will be able to erase the fear that debt and financial ruin is around the corner. And that thought is exhausting. Because it is a way of thinking not easily corrected. I don’t begrudge anyone else their wealth or security. EVER. But I just want to work hard enough and save enough and plan enough that when disasters come, I’ll be slightly equipped to deal with them. That is literally all I want. And it is a reality for so few people.” – Sarah

7. “Organic/Sustainable Food. A healthy combination of respect and fear kept me from questioning what my mom put on our dining room table. Every time I went shopping with my family, I noticed that it was always a rush to get the cheapest version of any food item; a task which isn’t surprising for a family with six kids. Despite being a fully functioning adult making six figures, I have been unable to shake this habit. Whenever I spend the extra 2-3 dollars on getting supposedly better quality meat at the store, I have a sinking and horrible feeling in my stomach that my money could be spent better elsewhere. Do I really need the best of the best ingredients? Probably not. Maybe I should be more like my parents and accept the ‘good enough’ mentality.” – Fred

8. “I tend not to think about money in the same way as a lot of my friends because of growing up constantly on the edge of total financial collapse. I don’t have the concept of ‘not a big deal,’ because I basically compulsively hoard all of the money I have. The biggest place this manifests is in going out to the bar. Even food on some level I can justify to my twisted brain because I say “well, food is fuel, I need to eat anyway.” But going out to a bar and paying $10 or more for a drink, even if it’s someone’s birthday or a special occasion, totally racks me with guilt. I have a few bottles at home, and I’ll invite people over or make myself a drink some nights, but I can count the times I’ve been to a bar in 2016 on two fingers, and I tortured myself the entire time on those occasions. It sucks because I would like to be able to relax and enjoy myself, and I can actually afford to go out sometimes and be a more normal 20-something, but I just feel too damn guilty.” – Evan

9. “Travel. The first time I traveled, I was 23 and going on a work trip to California. Prior to that, I had grown up, gone to college, and done literally everything in my life within the tri-state area where I was born. This is normal where I’m from, but a huge source of shame now. I don’t dare tell some people I’ve never been out of the country, because I know the judgements they would make on me (I’m 28 now). But travel, even on times I could have justified the cost, has always felt like such an extreme luxury because my parents never did. My mom has never been on a plane, and my dad has been on once! I hope by 30 I will be more comfortable opening a ‘travel’ section in my budget, but for now it still makes me feel like I’m betraying my parents.” – Lia