A Budget Breakdown Of My Trip To Iceland, And Exactly How I Saved For It 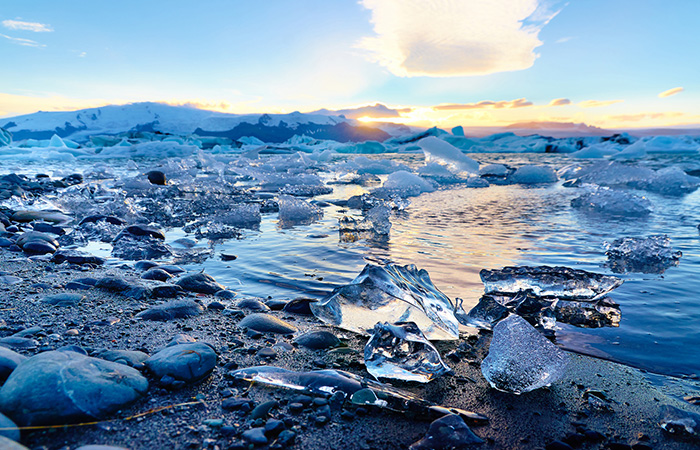 I was never the world traveler that I wanted to be. Throughout school, I’d see peers of mine sharing photos from far-off destinations on social media, and I’d grow concerned that I was missing out on something by staying home. But it wasn’t a lack of a sense of adventure that kept me in one place — It was, quite frankly, a lack of funds. I just didn’t have the financial resources I needed in order to pick up and go someplace far away.

Once I left school and (very luckily) landed a full-time job, I knew it was time to make a change. It was time to save up for a trip I’d always been wanting to take — going to Iceland. If I was to travel to Iceland, like I’d been wanting to do for years, I needed a plan and a budget for savings. Since I still live at home, I knew that I would be able to save a good part of my paycheck, which significantly helped me in the short-term. But because I’m planning to move out by the end of the summer, I knew that I would have to be saving for the move as well as for my regular phone and credit card bills, and so my budget was getting tight. But making the trip to Iceland is incredibly important to me, so I knew that I had to get serious and stop spending money on things I didn’t need — like cheap clothes from H&M — and by limiting my social life to going out for just one or two drinks every other week. I also decided to forgo any big summertime expenses, like weekend getaways or music festivals that always add up to a lot of money. It was tough to fight the #FOMO on the latter, but I knew it was possible to save and cut spending because my trip to Iceland was more important to me than any of that.

By the time I really formulated a budget and savings plan, I thought it would be too late to make enough for a trip in the following summer. Time was running out, so I made a point of saving about $1500 CAD each month, over half of my paycheck. Extreme, I know, but this was no easy feat and I had a short period of time in which to save, so it had to be aggressive. The rest of my bills are manageable, though, which also allows me to save a good deal. Right now, I pay:

Following this budget took a lot of discipline and effort and it forces me to monitor my bank account regularly. It’s useful to be so on top of my spending — I was able to see that I was spending quite a bit unnecessarily on lunches out and coffees. By making small changes like packing my lunch nearly everyday, and making things like tea all the time instead of buying it out at Starbucks, I was able to save a ton. Every little purchase counted, and I’ve nearly reached my savings goal for the trip.

Since Iceland is so unique and one of the more expensive places to travel, I knew this was going to be a trip of a lifetime, and I didn’t want to have to skimp too much on activities once I got there. Now that I had finally saved enough money after working hard for so long, I felt like I wanted to treat myself to the things that I really looked forward to doing when I got there, like whale watching, tours, and going out at night. In planning and budgeting for the trip I found that it was useful to access what parts of the trip that I could cut corners on. The areas that I decided I could were on the costs of eating and drinking out. Instead of eating out all the time, I’m planning on making as much good use of the hostel kitchen as I can, and I plan on visiting the nearby Icelandic hot dog stands as much as possible (!). I also found a hostel that offers airport pick-up, so I won’t have to spend money on the cab (a small expense, I know, but still a good place to cut costs). Beyond that, I’m really trying to limit what I buy for this trip in terms of clothes, and only picking up a few essential items in an effort to keep my budget in check.

When it came to planning the details of the trip itself, I was initially caught between signing up for a tour or renting a car and navigating the country myself. Since I’m a first-time, solo traveler, I opted for the former. After significant research on tour companies, like On The Go, Iceland Tours and Iceland Excursions, I opted for G Adventures. I felt it was a better fit because their customers skew younger, and they tend to prioritize adventure travel. I learned that the travel agency Flight Centre was running a 15% discount on G Adventures bookings in February, so I booked through them. It was that deal that forced me to take the leap and book because I knew I wouldn’t be running into a deal like that anytime soon — it was a great opportunity to save money.

Tours throughout Iceland were one of the few things I knew I couldn’t skimp on, so I made sure to budget for it. It made the most sense because I’d be traveling alone, and being on a group tour would be a good way to meet new people. It also meant that much of the planning would be taken off my hands for the most part – something that any inexperienced traveler could benefit from. For other travelers, I’d recommend not ruling out travel agencies when booking your vacation because it can make a difference in price and quality of the package. Preplanned tours can definitely be more expensive, and I wouldn’t call this aspect of my planning to be “budget-friendly”, but upon evaluating what I wanted out of this trip, I realized that going on a tour would be wiser decision. It would be safer, as I’m altogether unfamiliar to Iceland and don’t know anyone there. Also, most tourists travel to the region in the southwest known as the Golden Circle, whereas I wanted to venture out to the north and east coasts, something that could prove to be dangerous and costly if I did it on my own. Accommodating the tour is why my current savings plan needs to be so aggressive, why I cut corners elsewhere, and why I’ve been waiting for years to travel!

All in all, the trip, which includes tour, flights, hostels for my extra nights in Reykjavik, and an extra $1,000 CAD for random expenses (I could be overshooting it, but I want to play it safe in case of emergencies), cost me just short of $5,000 CAD. Considering some friends of mine have spent upwards of $10,000 CAD on a European getaway, I thought myself relatively frugal. Compared to other travelers my age, I saved the most by staying in hostels on my non-tour days, planning to spend my non-tour days wandering around the city (instead of going out on more tours) and by sticking to just one country instead of touring a few.

Although my savings plan was unrealistic to some people, I’m at a point in my life where I am unattached, have minimal debt, and have no other large expenses, so it made sense to spend money on a trip like this now. Do I regret not traveling at all during my undergrad? Sometimes — but I understand that I simply wasn’t able to afford it financially, and I knew that it was essential that I be patient and wait until it was the right time for me to book a trip, even though it didn’t fall at a time when everyone else was doing it. Although I do think about how it would have been nice to have been exposed to certain experiences and cultures sooner, I know that those will come in time as long as I continue to budget my finances and spend money wisely. I’ve actually come to enjoy looking at my bank account to see my savings build to the point where I can afford my next vacation, and realize that the wait to go on a meaningful trip was worth it after all.