How Much Does It Cost To Move To Germany? My Exact Breakdown 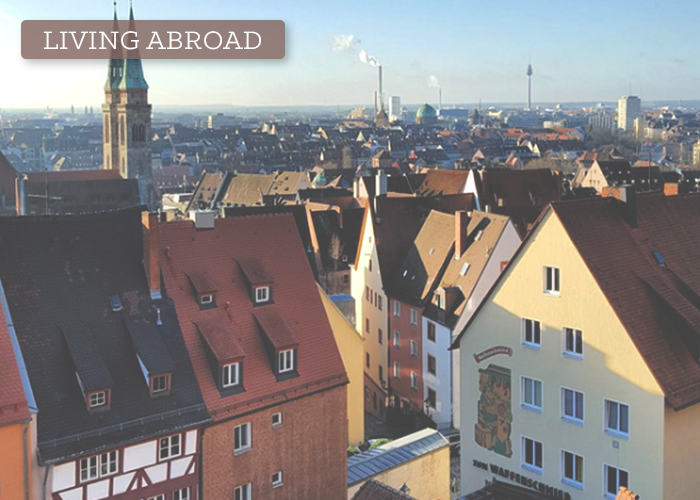 Every second week, TFD is taking an in-depth look at the cost of living in other countries, to learn how people like us are able to fund their worldwide dreams. Moving abroad is something many of us regard as an unattainable goal, but it shouldn’t be reserved solely for people who don’t have to worry about money. We have an incredible lineup of people who have moved to every corner of the globe, and are more than willing to explain what their expenses are, add to the conversation about the average cost to move overseas, and what it took to take the plunge and move abroad.

How much does it cost to move to Germany?

This week, Summer Brons, an American who recently moved to Germany answered the following 10 questions:

I live in Nuremberg, Germany. I moved here from Columbia, SC in December 2015.

I work remotely for a very small, U.S.-based travel company as a proposal specialist. I write, research, and obtain quotes to prepare detailed travel proposals. Our itineraries are high-end and very customized, and most of what we do is in Europe, so that works out nicely for me.

I should start off by noting that I did not move to Germany because of my job; rather, because of my husband’s job. I’m married to a Swede who has worked for a German company for ten years. He came to the states to study (like me, he was a “non-traditional” student – we were both 30 before graduating), and his bosses preferred to have him back at headquarters after he finished. Between that and my incessant clamoring to move here because I love it so much, he agreed.

So, the universe was definitely on my side when my job came about. Back in late August, fairly soon after I’d found out we were definitely moving to Germany, I happened to see a tweet from the writejobs.info account about a travel company looking for a proposal writer. The posting was only for a part-time position, which isn’t financially ideal for me, but I read on and learned that it was 100% remote and that they were looking for someone with both writing and project management experience, which I had. The job honestly sounded perfect for my qualifications and personal interests, and since part-time income is certainly better than nothing at all, I decided to go for it.

At the time, I was working full-time as a sales administrator at a commercial real estate firm. I was not planning on leaving that position until about a week before the move, because money. About mid-October, the travel company asked if I would be willing to start sooner if they could offer me full-time hours until I moved. That sealed the deal and I gave notice at my existing job. This ended up being HUGELY beneficial, because not only was I able to familiarize myself with my new job while still being in the same time zone, but I was also able to be at home during the crucial weeks prior to the move. Between work-related tasks, I listed furniture and other belongings on craigslist, cleaned, got a head start on packing, etc.

To afford the move, I saved as aggressively as possible from August through December and, as mentioned, sold off belongings. My car was a 2003 Acura with 180,000 miles so it wasn’t worth much, but I was able to sell it for $3,500. Between saving and selling, I had about $7,500 in my account by the time it was moving day. Now, my flight was $1,500 and January rent was coming up, so almost immediately after moving, I had to take about $3,000 from that fund to pay my Delta AMEX and our landlord (my husband had covered December rent, so I took care of January). Having more money saved up would have been great, but isn’t that always the case? I feel VERY fortunate that I was able to move with a job already in place, and even more fortunate that my workload has remained heavy enough for me to continue logging full-time hours thus far.

4. What are your monthly expenses? What’s the cost of living in Germany?

Our apartment is a 88 square-meter (947 square-foot) one-bedroom and rents for 1,245 EUR (about $1,355) per month. I split the cost equally with my husband, so my portion is about $678. To move in, we also needed to front a very painful three months’ worth of rent as a deposit, and Germans sometimes like to take their kitchens with them when they move, so to keep the one that was already in place, we had to purchase it from the previous tenant. That was another $2,400.

My biggest expense, aside from rent, is my student loan payment. I have about $35,000 in student loans, which costs me $450 per month just to make the minimum payments. Other expenses like mobile phone, internet, and TV have gone down (45 EUR/month for my phone, versus the $80 I was paying in the states). Fortunately, a car is not necessary for me here, thanks to the ability to walk everywhere and the excellent public transit system. Saying goodbye to my car saves me the $55 I was paying for auto insurance, and the $70ish I’d pay for gas on a monthly basis.

Groceries here, to my surprise and delight, are often less expensive. Not everything, of course, but many of the foods we liked buying in the states that were considered “specialty” items are NBD groceries in Germany. In short? My rent went up, sure, but other expenses have gone down or been eliminated completely, so I feel like I’m able to achieve a fair financial balance.

I love nearly everything about Bavarian culture! The work-life balance is excellent, the food is delicious (see also: bakeries literally everywhere), the beer is plentiful, and the cities are beautiful. I was fortunate to visit Nuremberg several times before moving here and I never wanted to leave during any of those trips. The city sort of felt like “home” from my first visit, so I have not experienced any real feelings of shock or displacement. Even lacking advanced language skills at this point, I feel very comfortable here.

Although I was already aware from prior visits, it still took a couple of weeks to get used to the lack of acceptance of credit cards. For a country as modern and progressive as Germany, one would certainly think that they could pay for most things with a card, but that’s not the case. Many places do not accept cards at all, and those who do often do not accept anything besides German EC (debit) cards. This includes IKEA, much to my dismay.

Since we’d just purchased our house in South Carolina in late 2014, we didn’t want to turn around and sell it only a year later, so we decided to rent it out. We put it with a property management company to let professionals deal with finding qualified tenants and handling little issues as they arise. Professionally managed or not, it is still stressful to own property that strangers are living in.

Aside from that, the obstacles with this move were very much the same as with any other move. It always takes longer than you think it will, you always have more extraneous crap than you think you do, and moving-related expenses are always more than you anticipated. Moving sucks, there’s no way around it!

Make sure you narrow your apartment searches to include “Einbauküche,” otherwise you’re likely to be scrolling through a lovely array of photos only to wonder why the image of the kitchen appears to have been taken while the place was undergoing renovation. It seems a bit weird to Americans, as we are generally averse to putting even a dime of our own money into rental properties, but it’s very common in Germany for apartments to rent without fitted kitchens or even light fixtures. 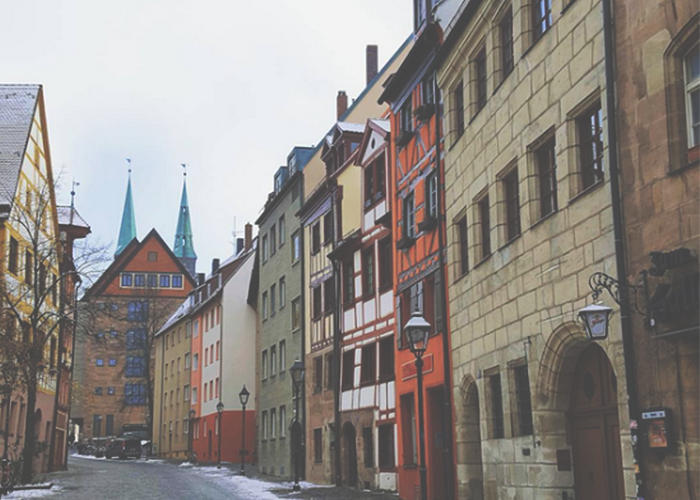 *Disclaimer: As I am married to an EU citizen, I do not have to jump through quite as many visa-related hoops as I might otherwise; and yes, I am thankful for this privilege!

U.S. citizens do not have to apply for a visa before moving to Germany. We have 90 days here by default, and you can apply for the visa once you’ve arrived. The first thing you do is register with the federal tax office to essentially say, “Hi, I’m living here now, great place you’ve got!” and then you can begin the quest to obtain a visa. I am in the midst of that process now, and just recently had an appointment with the Ausländerbehörde (immigration authority). I had to bring my passport, a new passport photo (and a dreadful one at that, ugh), my husband and his passport, our marriage certificate, and a fee of 28.80 EUR. It was quite painless, actually. I simply handed over my documents, waited for the surprisingly friendly man behind the desk to enter my information, gave digital fingerprints, and was advised that I could return on a date in early March to pick up my electronic residence permit.

Up next: Figuring out the best way to go about taking formal language courses. I’ve studied German on and off for a few years, so I do have an understanding of the basics, but I am very limited in my ability to respond verbally.

So far I’ve only been pleasantly surprised by how far money will stretch!

Summer is an Oregonian-turned-South-Carolinian who recently moved to Germany. She works in the travel industry and enjoys adventures, beverages, and the internet. She’s on Instagram and Twitter.