Ask A Mortician: Caitlin Doughty On The Importance Of Having A “Death Plan” 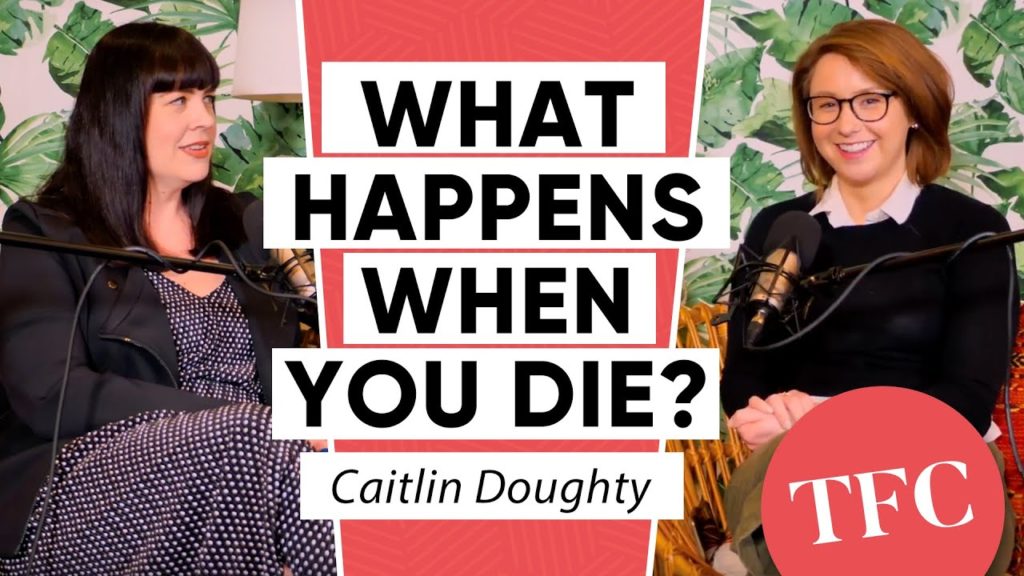 Each week on our new podcast series, The Financial Confessions, we’ll be sitting down with a new guest to talk all things money, getting ahead in your career, and the financial insecurities that make us tick. In this episode, Chelsea spoke with YouTuber and mortician Caitlin Doughty. Read on for their conversation about the importance of making a death plan. Listen to the full episode here or scroll down for the full video!

Chelsea: This is a naive question, maybe, but I have felt — because I feel like in my — especially — and again, kudos to you for this, because you’ve been such a huge part of it. But I feel much more comfortable with the idea of death — I think we all, at different times in our life, have people in our lives who we know are not going to be around forever.

And you start with each one to maybe get better about, and you start to maybe think, wow, I really treat this time with this person as so precious, because I know that she could go at anytime. Let’s extend that to everyone that I love. Getting more comfortable with the idea of death as a concept, I think — making a lot of progress there.

However, the concept of a dead body is a very different thing, because most people don’t have the opportunity to come in contact with them until it’s someone that you love and know, in which case it’s extremely personally disturbing. And there’s not a service out there where you could just go hang out with a dead body to get used to it, is there?

Actually, at my funeral home — no, there’s not.

Show and tell me!

You’re just not. That’s not what happens biologically or psychologically when you see the body of someone you love, especially if it’s in a safe environment, and you feel like you could be present. Something that we actually do quite a lot at my funeral home is families will come in and help us prepare the body. So it’s a little more guided, we can be there and help them along.

Here’s how we brush their hair. Here’s how we put on their favorite scarf. And something that we find happens a lot is there will be a group that’ll come in, and some will be gung ho, and some will say, I’m just going to sit outside the room. I don’t really want to do this. It’s not for me.

And then a couple minutes go by, and you see the heads start to pop around the corner. And they look — wait, actually, mom wouldn’t do her lipstick like that. No, give it to me. Give it to me. All of a sudden, they are totally involved in this service, and they lose that fear after they’re able to be present, be around.

I often think that it would be healthy for people — I want to do it, and I feel like — I think a lot of people I know could benefit from doing it — of creating a true in case of death plan that includes a budget, that includes, please do not spend more than $895 on my body, because it has no meaning to me, or I don’t want to be involved, or I don’t want to be buried, or whatever it is. But making a plan for it so that no one has to speculate on your wishes, and therefore potentially be told by some profit-seeking entity that this is what people do.

I send an email out every year, every other year, entitled Death Plan — which I don’t recommend, because that could freak out your friends and family. But for me, they’re used to it. But I send it out to my mother and to my friends and close people around me and say, here’s exactly what I want. And I also have an advance directive, which — a will, financially, is incredibly, incredibly important. But even more important than that, I would say an advance directive.

It’s so easy to do. Type in your state or your country plus advance directive, sign it, get some witnesses, and know who is going to be in charge of your body before you die if you’re in a coma or if you’re very sick, and then who’s going to be in charge of your body after you die. And make sure that person is someone you trust, because especially if you think about LGBTQ community or people who just are not with their family anymore and have chosen family, if you die, all the rights to what happens to your body goes to your next of kin, which is maybe your mom in Alabama who you hate now.

There’s actually — I saw this — play OK, I’m obsessed with Adam Driver, and he was in this play–

— on Broadway this year called Burn This. I did not think that the whole play was very well-done. Adam Driver was amazing. But the whole plot of it is that he’s a character whose brother dies, and he was gay. And this was set in the 1980s, and his family would not acknowledge it.

He had no relationship with his family, but because he died and had no advance directive, all of it turned back to his family, and creates this enormous conflict. And everyone who knew him in his real life was incredibly upset by the memorial, by the funeral, because it was completely betraying his life and who he was. And it’s funny, because I think a lot of people don’t realize that it’s even an option to prepare for that.

And it’s an incredibly easy option to prepare for that. Literally, it’s a 5-minute, 10-minute print out this advance directive from your computer, “sign-y,” “sign-y,” get some people to witness it. Talk to the person who you’ve decided to be your agent. Don’t spring it on them that your corpse is now their responsibility. But have it be your partner, your good friends, your parents if you trust them and have a good relationship with them, someone that you know — and it’s also an amazing opportunity to then have that conversation about what you do what, and where the money is going to come from for it.