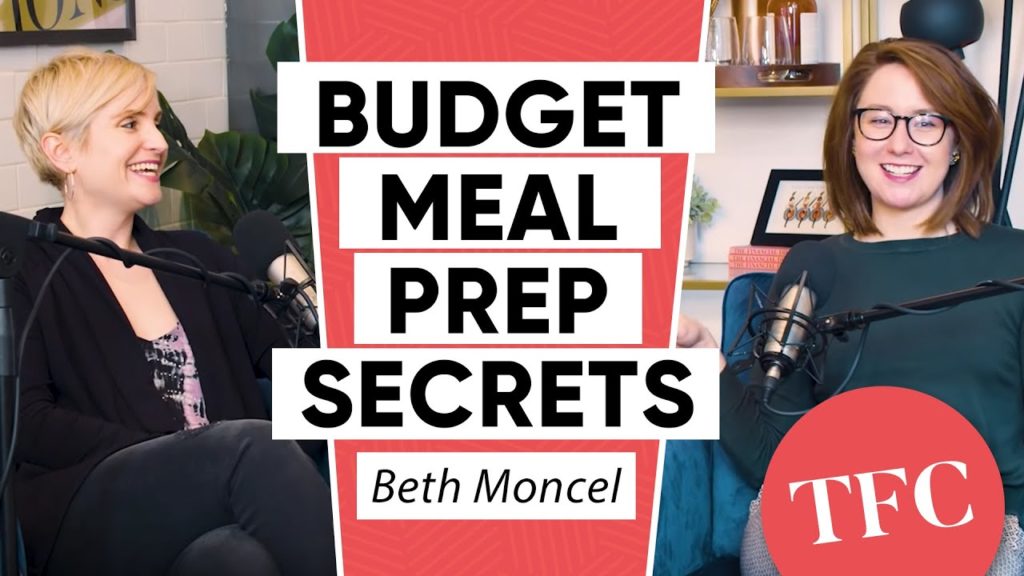 Each week on our new podcast series, The Financial Confessions, we’ll be sitting down with a new guest to talk all things money, getting ahead in your career, and the financial insecurities that make us tick. In this episode, Chelsea spoke with food blogger Beth Moncel, the person behind popular blog Budget Bytes! Read on for their conversation on the best ways to start getting into cooking when you’re intimidated by the kitchen. Listen to the full episode here or scroll down for the full video!

I would say probably a soup, because you’re literally just throwing things in a pot, adding some water or broth, and boiling it. It doesn’t take a lot of skill. And it’s almost always delicious.

And very hard to mess up comparatively.

Yeah. You just– there’s not a lot of technique that goes into it.

I feel like that’s another thing where you just put it in the oven, let it do its thing, and when it comes out, it’s so delicious.

And then you could do so many things with that.

One of the number one things that I’ll make at least once a week just to force myself to consume a lot of vegetables in a delicious way is just a sheet pan full of broccolini or broccoli rabe, a trillion slices of garlic–

And just some olive oil, salt, and pepper. It’s like nature’s chips.

And it goes with basically any dish. That’s the thing– I would say that the way I cook when I’m having people over is the way that I feel like would be easiest for most people to start as I almost always do something that’s like braised, or a sauce, or something that doesn’t have to be babied, and is really easy to fix if something goes wrong with it. And then a roasted vegetable.

Yeah. I think our culture is really obsessed with the word fresh.

And serving things over a few days, because that’s the only efficient way to do it.

Otherwise, they’ll be losing money. So every time you think you’re getting something fresh, you’re probably not. So don’t be afraid to do that at home as well.

And also make sure that you can figure out the maximum amount of things that can be done ahead of time, because so much, I feel like, especially on a weeknight, when you come home from work, or god forbid if you have to do something after work, and you’re just like, are you serious? Like, I have to cook? But the more things that are done for you, especially if it’s something like time-sensitive, you’re like, oh, I have these potatoes that I pre-peeled and they’re in a bowl of cold water, and if I don’t do something with them tonight, I’m losing them.

Yeah, get a little incentive.

But just like the most you can do to get yourself right to that place where it’s easy to cook, I feel like that would incentivize so many more people. I think it’s that overwhelming feeling of like, I have to do it all, you know?

Yeah. Or that food has to be really complicated. I really advocate for really simple meals. Like you were saying, a roasted vegetable, maybe two.

And a piece of meat, which doesn’t have to be complicated to cook. Throw it in a pan with some herbs and spices, and that’s your meal. It’s super simple, but it’s really good.

In my freezer. Because here’s the secret with pasta sauce. You defrost it. Toss it with some fresh pasta. It tastes literally identical to the night that you–

That’s what the restaurants do.

Literally identical to the night that you made it. What is a cuisine that you have really not mastered, but you want to?

I’m really good at the Americanized take out fake out.

Yeah, I’m really good at that. But the authentic stuff is really intimidating to me. I think probably–

There are some ingredients that are a little bit harder to find. I’m not sure how to use them right. Or if I do go to an international market to find the ingredients, I can’t always read the labels. So that’s a little bit scary to me.

Yeah. I have to shout them out. I was talking to Beth before we started filming about The Woks Of Life. They’re awesome. It’s actually a family that maintains this food blog together. But they have just an enormous amount of really authentic Chinese, especially, but other Asian dishes as well, and super easy to follow, super step-by-step, pictures for everything. And that has single-handedly gotten me into feeling really confident, particularly with Sichuan cuisine.

Yeah. I need to check it out. Because I did go to China last year. And the food was so good.

Where in China were you?

I was in Shanghai.

That’s so cool. Do you still find cooking and recipe developing as fun now as you did 11 years ago?

I think yes. I mean with any job, even if it’s your passion, there are going to be days where you’re like, I don’t feel like doing this. But it’s such an artistic expression. I don’t think I’m ever going to really get sick of it. There’s just so many possibilities to do so many different things. And when you do create something that is so much better than you thought it was going to be or you’re like, you find this magical taste combination, it’s just a really great feeling. And I don’t think that’s ever going to go away.

What is something that you feel like most people get wrong when it comes to being in the kitchen?

I think the number one thing that people get wrong is they think if they follow a recipe to a T, that it’s guaranteed to work out.

But there are just so many variables when you’re cooking, whether it’s the individual settings on your stovetop, your cookware, brand ingredients. All those things can make a difference in how a recipe turns out. So you’re not going to cook like Julia Child the first recipe out of the gate. It’s really some– a skill you have to learn. And it’s going to take failure and just trying over and over again. So don’t be upset if something doesn’t turn out the right way the first time. Use that as a learning experience and enjoy the process.