How To Control The Inner Toddler That Is Your Emotional Spending 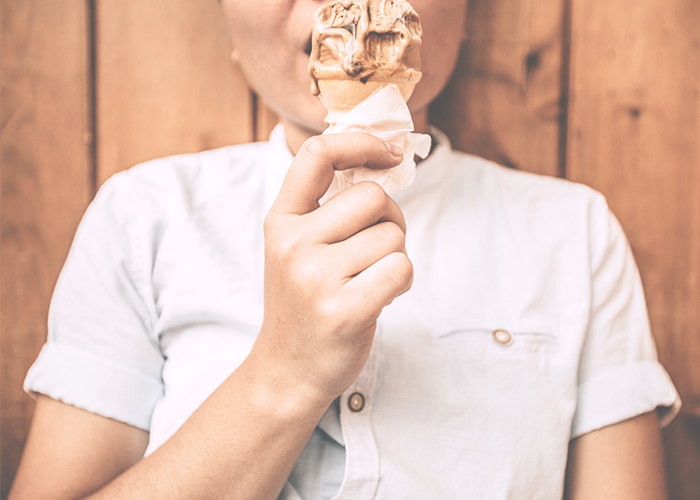 One of my favorite columnists at the moment is the environmental blogger Madeleine Somerville. She writes wonderful articles and books about going green and conscious consumerism, as well as ones about parenting a little girl. A few weeks ago, I watched her video about trying to teach her two-year-old daughter to be a more modest consumer and how challenging it can sometimes be. Her daughter will dart around shops like a magpie, picking up little bits and pieces. Madeleine will then have to very gently persuade her daughter that the thing she has just found is very nice and she has every right to appreciate it, but she needs to “leave it in the shop for another little girl.” The hardest part is saying this without it resulting in a massive tantrum.

Madeleine realized it was only through raising a toddler that was she able to understand her own emotional impulse to spend money. The conversation she had with her toddler about stuff she didn’t need was identical to the conversation she had with herself inside her head about things she wanted for emotional, rather than practical, reasons. In addition to parenting a small child, she was parenting herself, training herself to “leave something in the shop for another girl.”

I have been thinking of this idea for quite some time — that it is impossible to be a sensible consumer unless you understand that a great deal of your impulses are not based on logic, but rather a very deep-rooted urge for instant gratification. If you have ever been fortunate enough to go to a high-end hotel or have a luxury spa treatment, you’ll know that the whole experience is basically you paying an exorbitant amount of money to be treated like a baby for a contracted amount of time. You get fed, nurtured, followed around, doted on, complimented and encouraged to take naps in the middle of the day.

If our inner children didn’t exist and need to be catered to, these services would not be part of a hugely successful industry. Inside all of us there is a needy, red-cheeked toddler who wants to throw herself on the floor and have a massive hissy fit because she wants something you don’t actually need. It is our responsibility as adults, if we want to have any kind of financial cushion and a savings account with actual money in it, to parent these inner children. After all, toddlers have parents who control what they can and cannot have. We have pay-wave bank cards, and without willpower, we are literally two-year-olds with unlimited spending money.

I’ve had plenty of experiences that have triggered my emotional spending. I think of it as my inner “toddler” — I honestly think it’s a good idea to compartmentalize emotional spending so you stay in control of your financial decisions. Every time you go into a shop, I want you to imagine you are in the company of a two-year-old child and you need to reason with her in order to make choices.

In Singapore, there is a shop that sells lovely French beauty products, including an old, old chemist makeup range called T.leclerc, which is gorgeous, expensive, chic, and comes in the coolest retro packaging. Sadly, I seemed to be the only crazy European lady who knew what this obscure brand was (I actually did a little jumpy dance when I discovered they sold it in the store). It hadn’t been very successful in the Asian market, and they ended up with too much of it. I discovered they were having a huge bonanza sale and attempting to get rid of a large portion of their stock, selling eye shadow pallets and full-size bottles of foundation that are normally $50-80 for about $7-10. I managed to stay incredibly calm and collected, considering this to be the opportunity of a lifetime to try an entire makeup brand from which I normally only allow myself to have one thing a year (I mean, the mascara is about $40).

I kitted myself out with a new foundation, concealer, powder, mascara, lipstick and some jewel-like little single pots of eyeshadow. I love everything I bought and find getting ready in the morning especially cheering. I even got some Christmas presents for people tucked away for December.

However, the rest of that week, toddler me kept wanting actual me to go back into the shop and buy more makeup. I felt panicked I hadn’t bought enough — I needed to stock up and buy “backups” of things and more Christmas presents for people. One day I was teaching a class, and the toddler was literally begging me to go to the shop after work and buy lip gloss.

Me: What the fuck?

Me: We don’t wear lip-gloss, you wore it once and a mosquito got stuck on your bottom lip and then you accidentally ate the mosquito.

Me: No I have to teach now.

I was so relieved when the sale was over and I could go back to normal; it was a very tough week of saying “no” to myself over and over. I have a notebook I use for tracking student progress and making notes of curriculum changes at work, and my emotional spending was so triggered that week I actually wrote “I want T.leclerc makeup! I want T.leclerc makeup!” on one of the pages.

Oddly enough, making crazy-lady notes in my work book really helped get it out of my system, as does talking to my partner if I’m tempted to buy something because then we get to laugh about how silly it is and it takes a bit of the ammunition away from my emotional impulses.

Another instance when I had to fight off my inner toddler was when I managed to get an unbelievably cheap flight home to England for Christmas by booking it really early. I was thinking of treating myself to a night in a nice London hotel before taking the train to my family’s home. I have always wanted to visit the St. Pancras Renaissance Hotel (made famous by the Spice Girls’ “Wannabe” music video), so I booked it with the option of canceling for free. I did some research and discovered that the hotel is a beautiful, historic building, but the bedrooms are disappointing. Then I saw that I could use the facilities, including the restaurant and Turkish spa, even if I wasn’t a guest. I opted for that, as I’m trying to put more money into my savings accounts and increase my passive income.

Me: Listen I’ve made a decision to cancel my reservation at the St. Pancras Hotel. It’s just too much money.

Toddler: We’re not going to the Spice Girls hotel? (bottom lip wobbles) You ruined my Christmas! I wanted to do something nice!!!

Me: You do nice things all the time, we just came back from a week’s holiday in Bali! You got $5 massages every day!

Sometimes you need to cut back on expenses, including your fun splurges. I’ve noticed that when I say “no” or compromise, my emotional, toddler self really pushes back and accuses me of being mean and miserly and not enjoying my life. In this scenario, I cut back the expense of the experience, but not the experience itself; I’ve still got a nice day out in London to look forward to in December, but now I’m not paying a few hundred dollars for a sub par hotel room I’ll regret paying for.

Your emotionally-spending inner toddler is something to think about the next time you are out in public and see a small child having a temper tantrum — something else Madeleine Somerville taught me. If you are going to react in any way, you should give the parents a cappuccino and a hug, as they have probably just said “no” to something their child wants, and the child is learning to emotionally cope with that. Granted, a 28 year-old woman standing at the T.leclerc counter putting back a lipstick she wants but doesn’t need is significantly less noisy than a toddler having a screaming fit over a box of Captain America cereal, but their emotional process is pretty much the same.