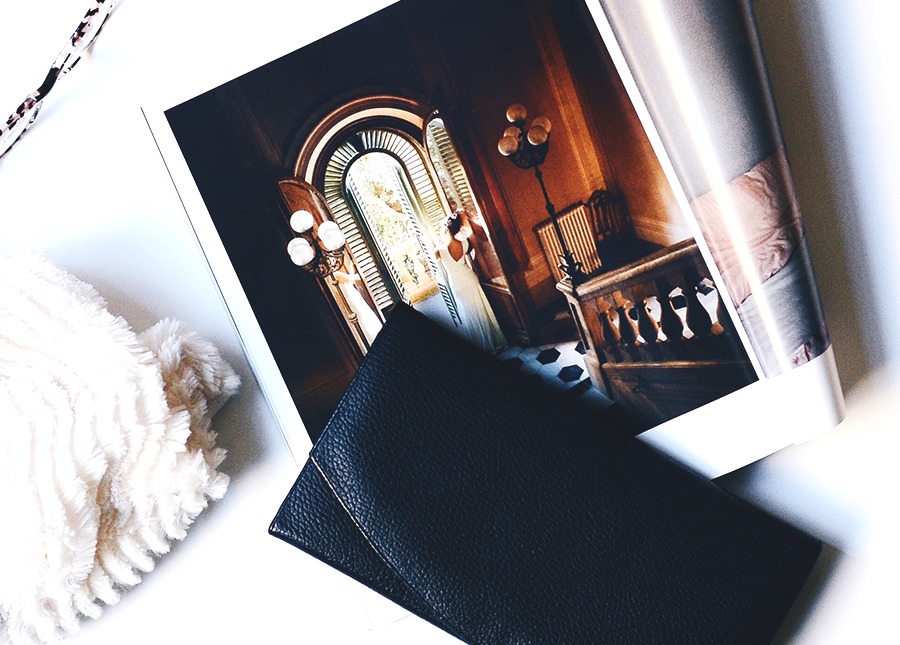 Today’s the day! Okay, technically the “day” was on Saturday, but who’s counting? What was the day, you’re wondering? The official end of my year-long shopping ban of course!

I originally conceived of this ban because I was feeling financially stretched. I wanted to save some money by just not buying anything I didn’t need. That sounds simple enough, right? The reality turned out to be more complex, more rewarding and more frustrating than I could have thought.

As the ban counter started ticking down, I realized I haven’t really shared what I did during the ban as an alternative to consuming. I shared bits and pieces on my Instagram, but I wanted a more complete account here. From a biological perspective, we need to consume, to live. If we don’t consume regularly, we will die. That’s just reality. I made it my unofficial mission during my shopping ban to consume in a different, more intentional way. I’d like to think I was successful.

Here are some of the ways I consumed differently during my shopping ban.

I Repurposed and Repaired…A Lot

DIYing stuff is kind of my thing. I’ve always enjoyed taking something that isn’t living up to it’s fullest ‘stuff’ potential and giving it a makeover.

During my shopping ban, I repurposed and repaired a lot, mostly clothes, but also some electronics.

I’d been holding onto some old fabric scraps and some scrap yarn for years (I know, what a great minimalist I am). After moving into our first house in the summer, I took it upon myself to turn these scraps into wall hangings for our living room and second bedroom. 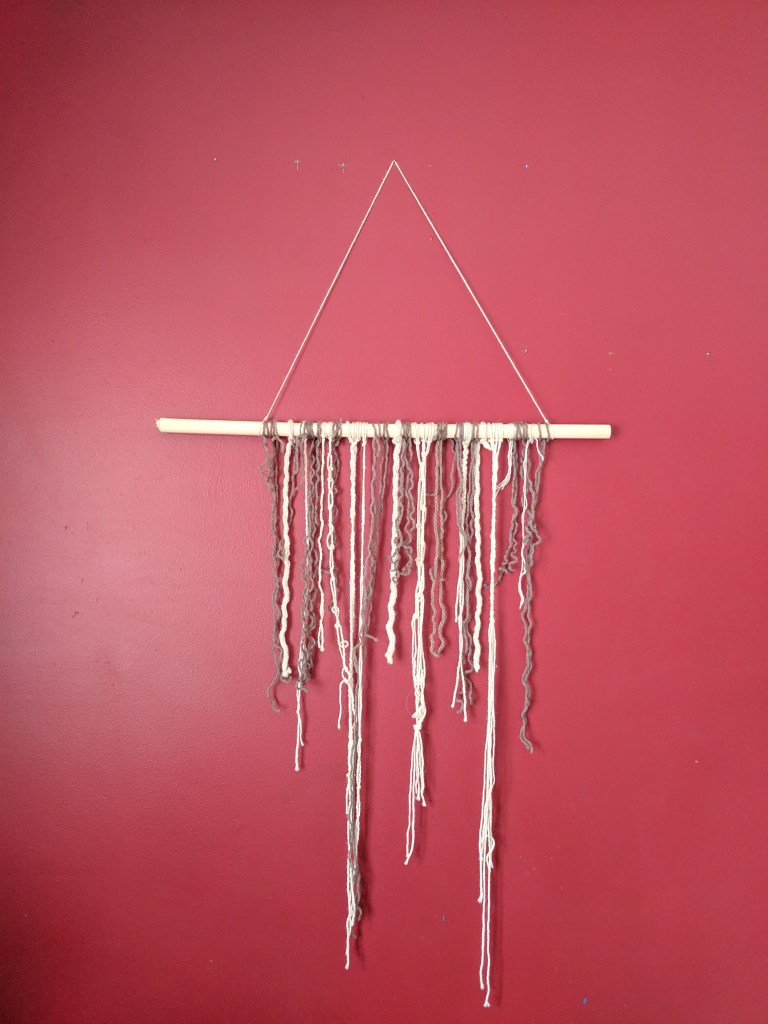 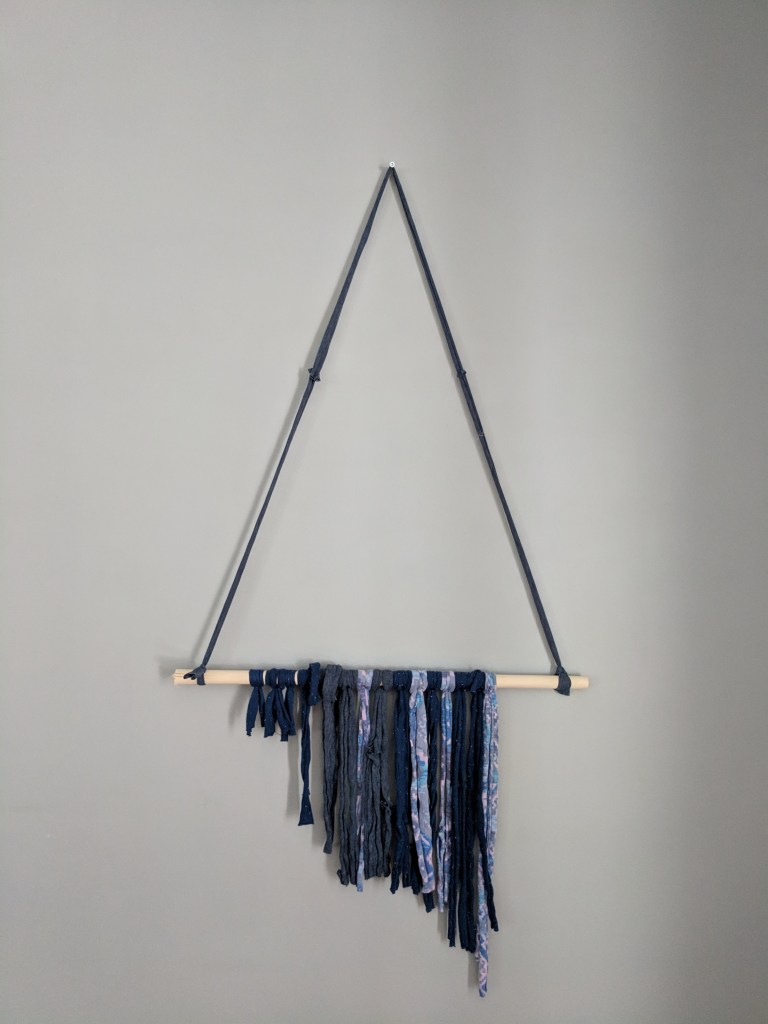 I also transformed items of clothing from pieces I rarely wore into pieces I wear all the time. Black jeans became frayed jean shorts. A blouse with unflattering sleeves became a sleeveless shirt that I now confidently wear to work. And old broken sunglasses became the perfect final touch to a Where’s Waldo Halloween costume. 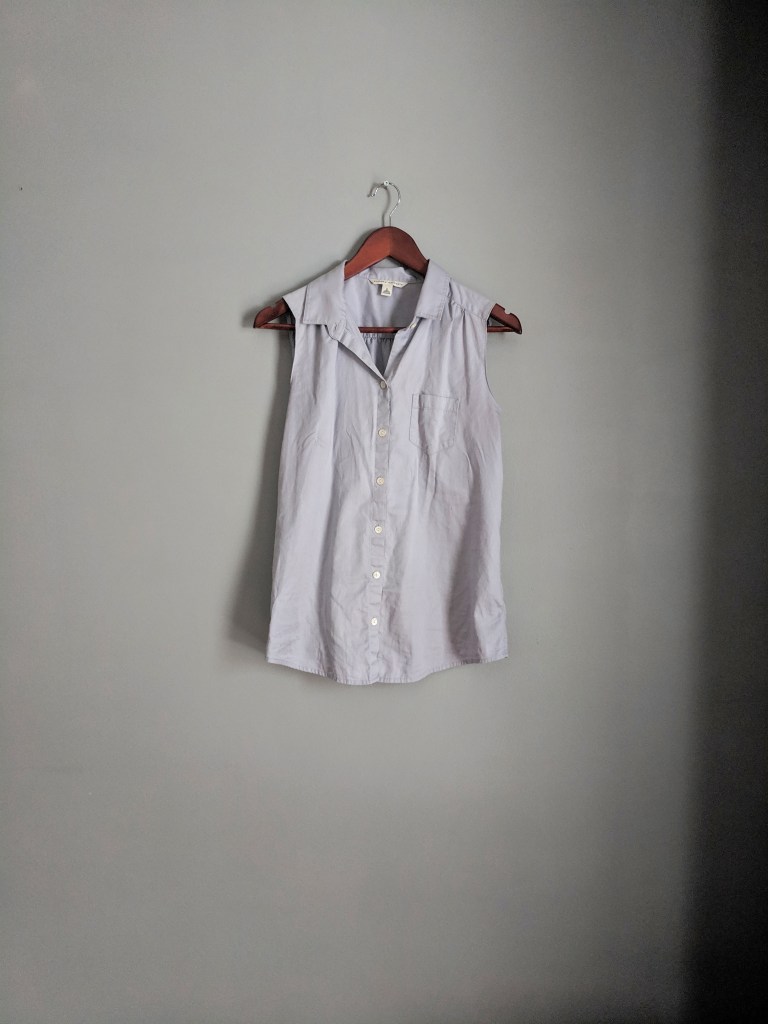 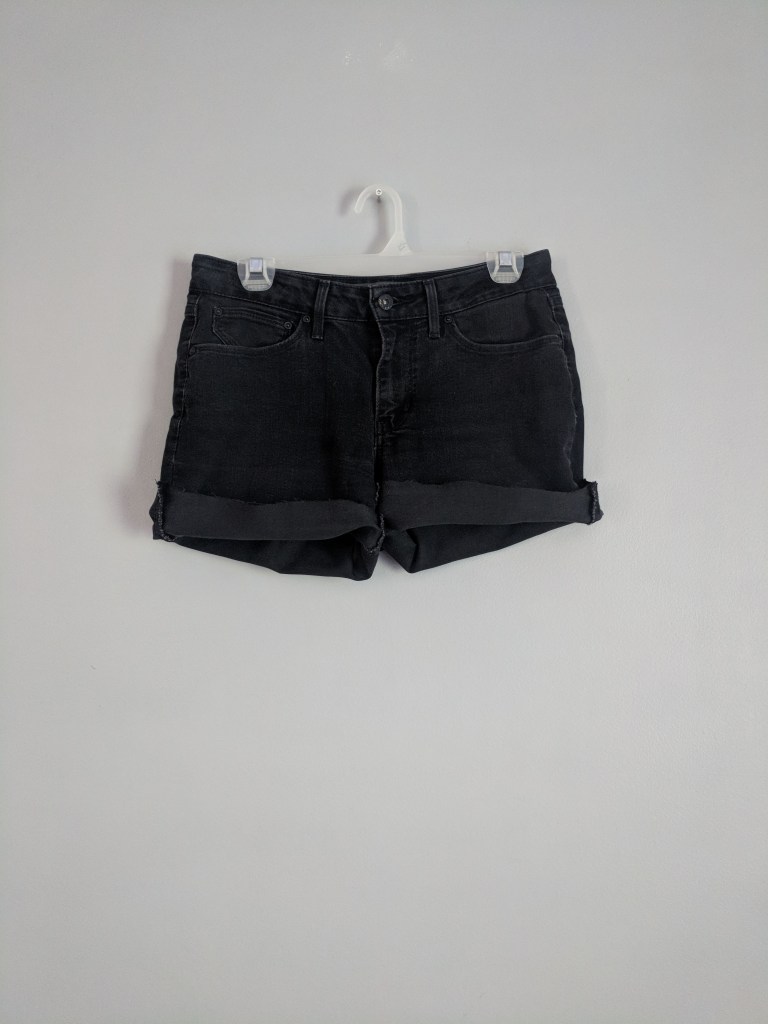 Since I wanted to consume anything new as little as possible, my shopping ban was also full of repairs.

I put a solid state drive into my 8-year-old computer to give it a couple more years of life (and stop it from sounding like a jet engine about to take off). Holes were repaired and buttons were replaced on two pairs of leggings, one sweater, one shirt and about a million pairs of socks (darning is the devil). These repairs were very minor and dare I say even fun? Had it not been for the ban I know these repairs would have remained untouched until the last possible moment. I am a grade A procrastinator folks.

I Made A Lot

A goal of mine during the shopping ban was to at least try making my own consumable toiletry products. I’ve had most of the raw ingredients on hand for two years (see procrastinating above), but this finally felt like the time to do it.

I started off my DIY adventures by attempting to make lip balm – with moderate success! This is one I’ll definitely keep trying since it’s so cost effective compared to buying other commercial lip products.

I also made my own dry shampoo spray, hair serum and hair spray – both awesome. These products are also how I consumed most of my vodka this year (lol).

I also tried my hand at making deodorant, with mixed results. I thought I’d found my forever DIY deodorant but then I started reacting badly to the baking soda. Then I tried a liquid recipe – and let’s just say that putting apple cider vinegar on your underarms is not very pleasant. In the end, I’ve transitioned to a rock salt deodorant that works pretty great and should last a year or so.

Moving away from cosmetic and bath products, I also finally tried my hand at fermenting this year. This is something I’ve wanted to try for ages, so much so that I read five different books on the topic before I even tried my first recipe. Some things turned out really well – like my pickled beets and some things didn’t (looking at you garlic scapes). But it was really just fun to try turning a food item into a long-lasting, healthier version of itself with relatively little outlay. My mason jar collection definitely came in handy for these experiments. 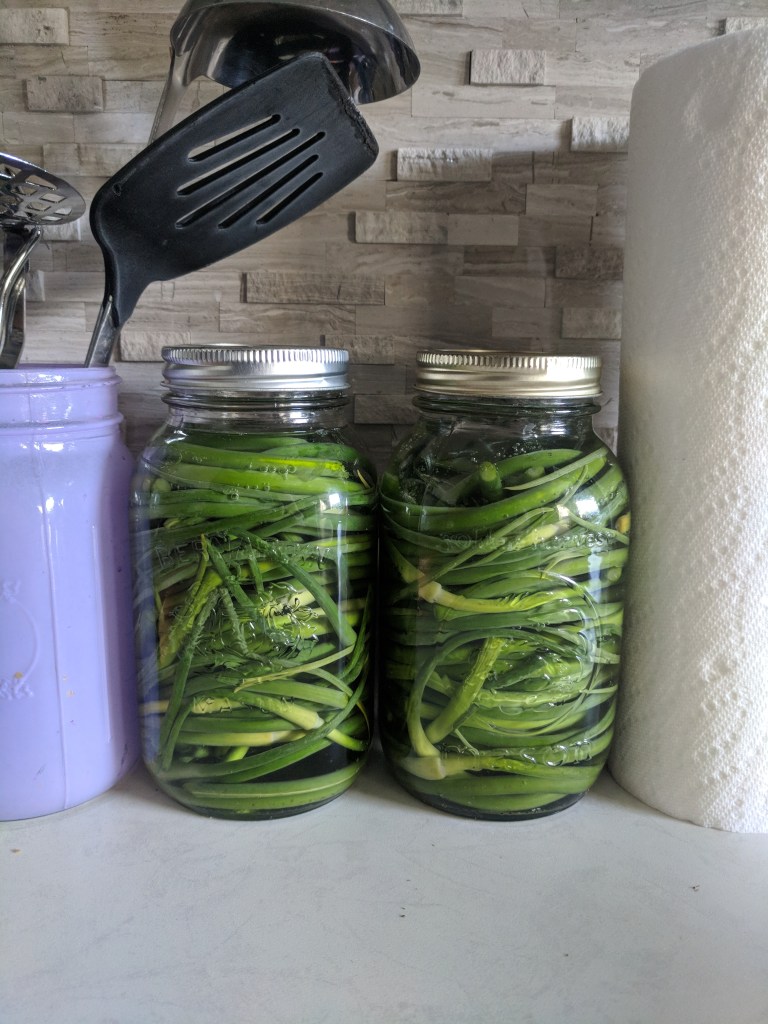 These projects might seem like weird things to want to try during a shopping ban (or at any time really). But, all of these fun experiments are really just my versions of crafting – fun ways to pass the time and if they end up helping me learn a new skill or become self-sufficient in some small way, even better.

Despite being very far into my decluttering journey, I still managed to find things that I no longer needed to have in my life.

Part of my decluttering this year was due to Mr. TA and I buying a house. I’ve moved a lot in my life and whenever I do, I become ruthless with decluttering. Some things just aren’t worth packing and unpacking every couple of years.

A majority of the clothes I decluttered this year went to a local consignment store. While it’s not the best way to maximise how much you make from selling an item, it is by far the easiest in my opinion. I was even able to use th money from my sales towards locally made Christmas presents for some family members this year – which is a great win-win.

We also did a major basement clean out of things that had broken over the years or that we’d no longer need in the new house. We might still have a massive bad of receipts that need shredding, but at least now they’re all in one place and not hiding in miscellaneous bags and wallets around the house.

This might seem counter to the purpose of a shopping ban, but I consumed A LOT during the course of the year. While it was written within my rules that I could purchase consumable products like toiletries and food products, I wanted to use up as much of my current stocks as I could before buying more.

That meant digging deep into my linen closet and using up every travel toothpaste, body lotion and sample size shampoo I possessed. Spoiler alert: I possessed a ton of body lotion. So much that I didn’t have to buy any during the ban and I still haven’t.

Because I am a nerd, I kept track of the toiletry products I consumed over the course of the ban. Here’s the itemized list if you’re interested:

Some of the things in this table I’d been working on using up for years (like the cannister of dry shampoo). Others I purchased and used during the course of the year (like the bars of soap).

Also, just as a side note, apparently I have a body odour problem because I sure when through a lot of deodorants, body wash and bars of soap.

What this part of the ban taught me is that consumables really can last for a long time (like the bar of soap from St. Lucia that I’ve been nursing since May 2017). It also taught me that we all probably have more than enough of these products in our homes already (looking at you, stash of travel sized body lotions). So, you almost certainly don’t need to buy more.

Lastly, keeping track of my toiletry consumables opened my eyes to how much I consume (no, duh). A lot of these products come in containers that are not recyclable where I live, and I’ve become acutely aware of the amount of waste I create on a weekly basis. I want to do something about it (more on that in a future post).

I started this ban because I wanted to save money. That’s the long and short of it. So, did I succeed at my goal? If I had to guess, no, I did not. There’s a very good, house-sized reason for that. For the money nerd out there, I’m going to publish a shopping ban by the number post next week to get into all of the nitty-gritty details.

What I’ve learned is that I may have been existing on the more extreme side of minimalism for a while. I don’t consider anything I bought this year to be “superfluous” – they are all items I would reasonably expect someone to have in their wardrobe.

It’s hard to summarize an entire year into one post, but that’s kind of what this feels like. I did spend 2018 carefully tracking my consumption and this post is simply a reflection of that experiment. Thanks for coming along for the ride – I’m sure I’ll have more in-depth reflections and thoughts on the ban in the coming weeks.

If you have a question about my shopping ban – fire away in the comments!

Tiny Ambitions is the online space where blogger Britt shares her tiny, but wonderful, life. Britt is a minimalist, a simple living advocate, and a tiny house enthusiast.