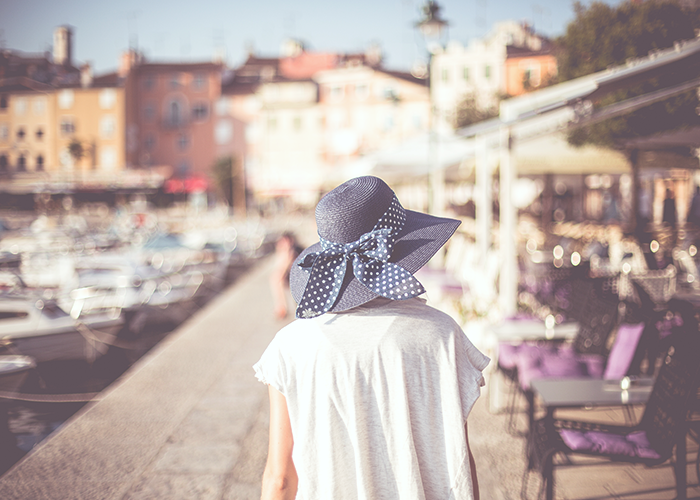 On July 1, 2016, I met my first major savings goal. It’s taken me almost two months to write this post, because I had to let the feeling settle in: I no longer have to contribute to this specific fund! It took nine months of saving money; many minutes (hours?) of poring over my budget spreadsheets; a ton of recalculating how much money I had earned, anticipated earning, and needed to earn; and a lot of sacrifices to meet this goal, but gosh does it feel good to say: “I did it.”

Why did I do this? So glad you asked.

Saying I love Nashville, TN is an understatement. It’s more of an obsession from which I can’t escape. It’s the one city I pine for day and night, and the only city I visit where I never feel homesick. It’s the only city that, when I drove into it for the first time, I glanced at the friends who were with me and said: “I love it. Oh my gosh, I absolutely love it.” Right now, Nashville is my home-away-from-home, but the plan is to make it my real home by the spring of 2017.

Because of my immense love for Nashville, the first savings goal I had was to save $5,000 as my “Nashville Savings.” I’ll go ahead and say that I might be splitting my savings the ~wrong~ way by having only two categories (an emergency fund and a Nashville Savings fund), but it’s the way that works best for me. I do contribute monthly to my six-month emergency fund, and I plan to meet my emergency savings goal before I move, but I wanted to create a separate goal to meet that will be used just for Nashville. I plan to use my Nashville Savings fund for the actual move, first month’s rent, rent deposit, and a little extra to help me get adjusted to a new city.

Before I could seriously think about packing up my life and moving to Nashville, I had to get real about saving money. I worked all through college, had a paid internship, and graduated with no student loans. Throughout and since college, I chose to live at home, drive a decade-old car, and forgo the annual week-long vacations I desperately wanted. As my mom says: “I don’t drink, smoke, or play Bridge,” and I don’t spend excessive amounts of money. Even though I didn’t budget or consciously save money during college, I did accumulate a small amount of money in my checking account, so my post-grad financial situation wasn’t terrible. I’m not saying I had a lot of money in my checking account, because I didn’t, but I wasn’t struggling either.

When I graduated college in May 2014, I knew I wanted to move to Nashville at some point, hopefully sooner rather than later. By the tail-end of summer 2015,  early Fall 2015, I realized I needed to make a plan of some sort because I felt stuck in my job. I just felt like my whole life was in a rut. I had been out of college for over a year, and it was time to figure out the best way to get myself to the next step. By October, I told myself that if I was serious about moving to Nashville, I had to do five things to get my finances in order and to meet my $5,000 Nashville savings goal. Here they are.

1. Create a spreadsheet with my savings goals.

This step was the most important. I needed a clean, organized way to see what goals I was saving for. I needed to see the dates of every paycheck I would receive (I get paid every two weeks), how much each paycheck would be, which goals (or accounts) I was contributing to, and how much money I would contribute from each paycheck I received. I know some people can simply look at balances to know where they stand, but I have to see my goals and incremental progress; it helps me hold onto my desire to continue saving money and working toward meeting my goal. I’m a “gotta see it to believe it” kind of person.

The chart below shows the first few dates of my spreadsheet. I have actual numbers on my spreadsheet, but here I’ve replaced those numbers with X’s. The X’s highlighted in green stand for the amount of each paycheck, and the X’s in the columns below Savings, IRA, Nashville, and Checking stand for how much of each paycheck will be transferred into each account on the respective pay date. As you can see, I started with a $0 balance in Savings and Nashville; I did already have an IRA and a checking account, which both had money in them when I set my $5,000 Nashville goal.

With every paycheck, I would open my spreadsheet and type the amount I transferred under the Actual column, and I kept a running balance at the bottom of each column to watch my progress.

Since my original plan was to be in Nashville by the end of spring or beginning of summer in 2016, I dated this spreadsheet beginning with the day I started budgeting (October 1, 2015) and ending with my goal achievement date (May 20, 2016). Interestingly, at the rate I was saving, I didn’t actually expect to meet my Nashville goal until July 20, 2016. Not because I hadn’t saved what I had planned to save, but because I thought eight months was a little too short of a time frame to save $5,000 on my current salary when I was also contributing income to my savings account and IRA. Turns out I reached it two months early.

That victory aside, plans don’t always work out how we think they will, and I’m no different! My move to Nashville has been pushed back to Spring 2017. Even though pushing the date back hurt, I take comfort that it’s better financially. The extra time allows me more time to save even more money.

2. Create a budget spreadsheet to track my spending.

As I’ve already said, I’m a very visual and organized person, so I created another spreadsheet that shows source of income and expenses. And, yes, it may sound like too much, but I track every dollar. Having such a detailed spreadsheet allows me to see exactly how and where I spend money. If I just said, “Oh, I spent $800 last month and contributed $500 to savings,” I wouldn’t be able to see the breakdown of spending and saving. Everything would be jumbled. 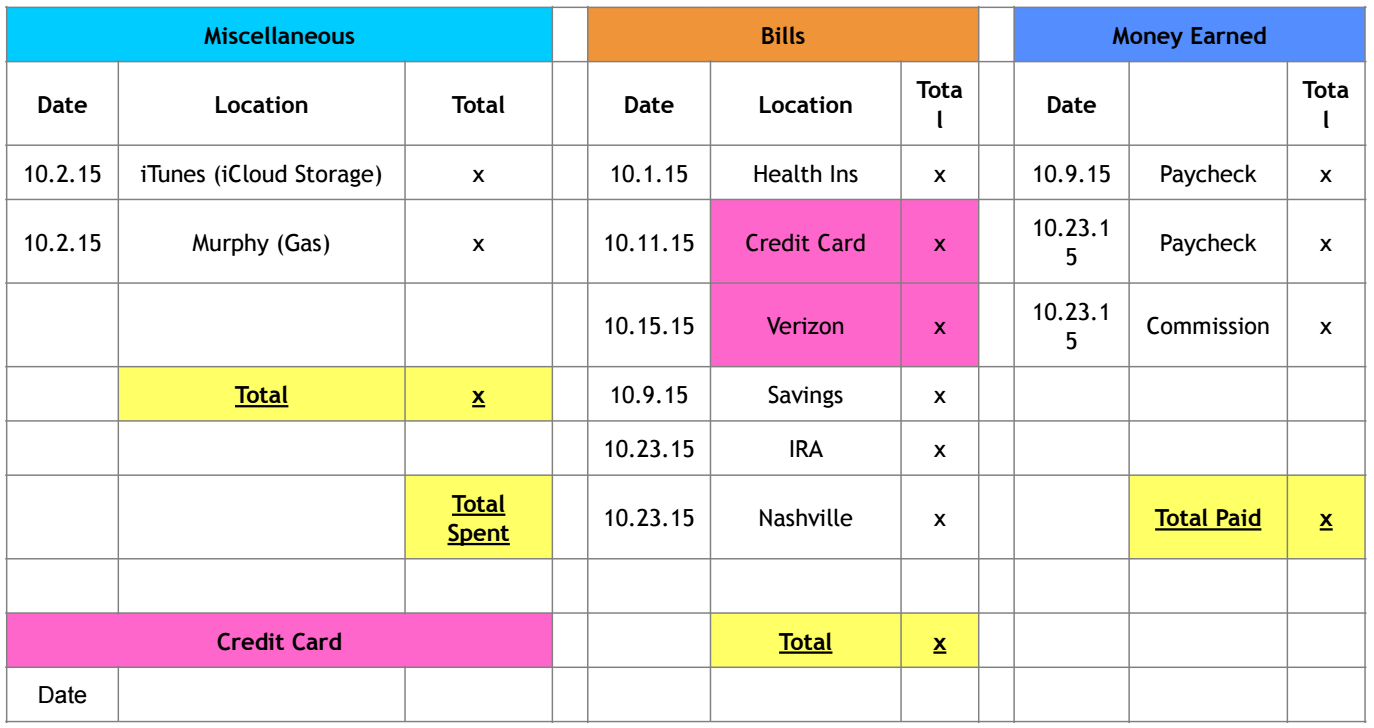 Like my savings spreadsheet, the X’s stand for the amount earned, spent, or saved. On the first day of every month, I look over the previous month’s spreadsheet. This allows me to say, “Hey, you spent way too much on concerts (or books or iTunes or whatever) last month.” Then, for the new month, I can focus on spending less on things I don’t need and saving more by contributing to my savings account, Nashville goal, or IRA.

This is oftentimes easier said than done, especially when you have a set salary. That’s where side jobs come in. Since I couldn’t rely on making more at my regular job, I had to think about other ways to earn money, which lead me to make a list of things I can (and like) to do: bake, babysit, and write.

Baking: I always bake for family birthday parties, and I’ve sold a couple birthday cakes and a few dozen sugar cookies and cupcakes in the past, but I had never advertised. I didn’t want a big baking business or anything, but I did want to earn some money, so I started posting pictures on Instagram of the goodies I bake for my family. Since February, I’ve earned enough to cover almost two months’ worth Nashville Savings goal by selling cakes, cookies, and cupcakes.

Babysitting: I haven’t earned quite as much money as I had hoped to through babysitting, but I have earned several hundred dollars since October 2015. The added bonus: that money was easy and fun to earn. Plus, it helped build my Nashville savings and meet my goal sooner than I had planned.

Writing: I have a B.S. in Writing and Communication, but I sell auto and property insurance by day. Not my ideal situation, but the joy of the internet is that I’m able to write and submit to blogs, magazines, and websites. I secured my first paid freelance job in March 2016, and though I haven’t made a whole lot of money, I’m earning money every month from writing. It’s far from enough to quit my day job anytime soon, but it’s a start. And every dollar I’ve earned so far has been added to my Nashville savings account.

When I started the budgeting and saving sheets above, I already had a checking account and an IRA. At first I thought I could simply keep all of my money in my checking account, but since I had new savings goals, I realized that I needed a savings account because 1) It keeps my money separated, 2) With a quick look, it’s easier to see how much I have in savings versus how much I have in checking, and 3) It’s less tempting to spend extra money when it’s in a savings account.

This was the easiest step of all, because all I had to do was visit the bank I use and open an account. I also set up online banking and linked my savings and checking accounts so I could easily transfer money between the two accounts.

5. Transfer money to my savings account every time I got paid.

So, every other Friday, when I received my paycheck, I deposited the check into my checking account, immediately logged into my online banking account, and transferred money into my Nashville savings account. I will admit that there were a few times I wanted to spend the money on a trip to the beach or a new purse, but I always held back and transferred the money.

After all of the planning, recalculating, and saving I did, I can’t tell you how good it feels to know I met my first major savings goal. Especially when I can say that I met my goal before I’d expected to! Yes, I sacrificed some things I wanted, but knowing I have the money to make a big move to Nashville is worth so much more than all the little things I didn’t buy.

If you have something you want that requires a lot of money, I’m here to say: if you follow most of the steps above and remain focused, you, too, can achieve it. Maybe you’re like me and have plans of moving to a new city. Maybe you’ll need to upgrade your car in a year. Maybe you’re planning to go back to college. Whatever it is, make a plan, set goals, and follow the steps you need to reach your goals. It may take time, energy, sacrifices, and hard work, but I did it, and so can you.