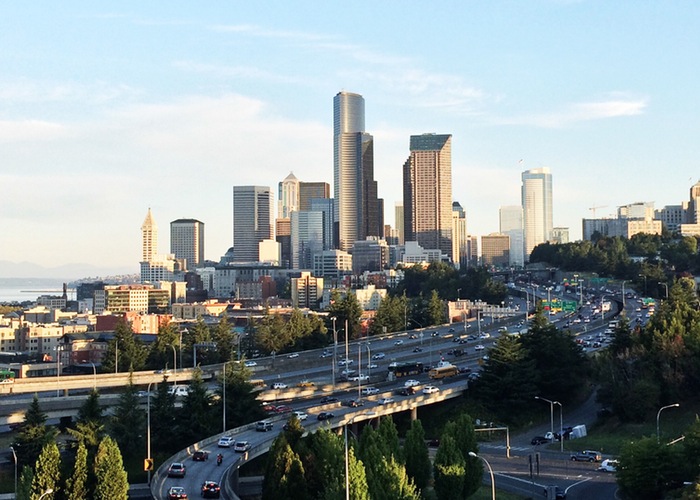 Before the age of eight, I didn’t know what it was like to have money. I had less money than most of the kids I went to school with. I didn’t own nice clothes. I wore exclusively hand-me-downs from my brother and clothes from Salvation Army. At one point my mom made up a brand for the pink goodwill t-shirt I wore so I’d feel better about not owning any brand-name clothing. We never went to the movies. All the other kids saw Toy Story in theaters in 1995, but I didn’t. We couldn’t pay for three movie tickets; that was too much of a luxury.

We went out for dinner rarely, if ever. But my mom made cooking at home fun. She’s a single parent, and she was in graduate school when I was growing up. It took her four years to complete the three-year program because she was caring for two young children. She got some child support, but she and my dad got divorced young, so there wasn’t a ton of child support to receive. My mom still tells the story of how when I was five and my brother was seven, we used to go to a ramen place and share one giant bowl of soup. That’s how you feed a family for $11 and still make them feel like they’re eating like kings. As you can tell, it’s not like we ever grew up without necessities. But with my mom in school, we were three people living off one person’s student loans and child support.

And then she started a job. A good job. A job that, in addition to meaning she wasn’t spending nights crying over payments to keep a roof over our head, gave her reduced-price movie tickets. So at eight-years-old, I graduated to store-bought clothing and got to go to the movies like the other kids. My dad was around a lot more because he had moved to our town to spend more time with my brother and me. Everything was coming together. My brother and I bounced from house-to-house. My mom, who we now almost never saw because she worked 18-hours a day, stopped picking us up from school. But my dad started doing it instead, so it was a fair trade-off. Overall, we led a nice middle-class life and had two loving parents both within 20 minutes of each other.

And then my mom’s career got big. Like, really big. For legal reasons, I can’t tell you what company she started. But she took on two very big-name clients and her business skyrocketed. It is truly an amazing story: a single (non-white) mother, who put herself through school while supporting her children, started her own business and it took off. There was no drawback. Yes, she was busy constantly, but we were raised to be happy for our mother instead of whining about the fact that we never saw her. We understood that everything she did to become successful was for us. She is, and always will be, the feminist icon I point to and say, yes, that’s my mom and she fucking did it.

Here is the problem with overnight successes: they aren’t always built to last. The business did well for a while. She made one very good investment before the business when she had a steady salary: she bought an apartment in a great neighborhood. But when she was making money off the business, it was going to fund the lifestyle she had to fit into. When you’re doing business in the big leagues, you have to look the part — that’s what she would tell me. She had the nice car, the nice clothes, and reinvested a lot of the money back in the company.

She invested a lot of the money in my brother and me (as did my dad). The business paid for us to go to private high school. It paid for us both to go to college (though we didn’t go to private universities at full-price). It allowed my mom to pay off all of her loans. For a while, we stopped worrying about money. We went on trips and out to nice dinners. And we didn’t go to nice dinners to celebrate things, we just went because we could.

But there were a lot of other expenses in addition to all of this. She was the kind of business owner who was paying her staff before herself, and that was admirable, but it also ended up being a problem. She took on a lot of pro-bono clients and lower-paying clients because she wanted to help them.

You can guess how this ends: her business is closing. And it sucks. This company is all we’ve been hearing about for the last ten years. And her business is mainly closing because she was trying to put everyone else first. I’ve watched this business develop for years and she was constantly making the right decisions for her clients (and her staff), but not the right decisions for herself. She also had no safety net. She doesn’t come from money, she isn’t married. She did this all for herself, and for her kids, with no support system to help her bounce back if at any point she failed.

This is not the end of the world, of course. While my mom’s business is ending, and our period of living the life of luxury is over, she still made something amazing. She’s been heartbroken for a long time because of this, and it’s impossible to say anything consoling because she deserved to succeed. She deserved to ride the success and not have it end. But it ended, and when all of this is over, she will still be just fine.

That’s what it’s like to go from very little money to a windfall, and then to watch it go away. There was a while there when my family forgot about the days of splitting ramen and not being able to afford movie tickets. We got so used to being able to buy something if we wanted to because it’s an easy thing to get used to. My brother and I have been financially independent from my mom since we graduated college (over four years ago), but it has still been hard to go through all of this. We have helped my mom cut back her spending and we all have better spending habits now. We’ve gone back to only going out to eat on special occasions. It’s hard to relearn how to be frugal when you get a taste of what it’s like to have a surplus. But we have and we’ve supported each other through all of this. And that’s what matters.

*Jen Kerena is not her real name.