Everything I Learned From Not Eating Out For 30 Days Straight 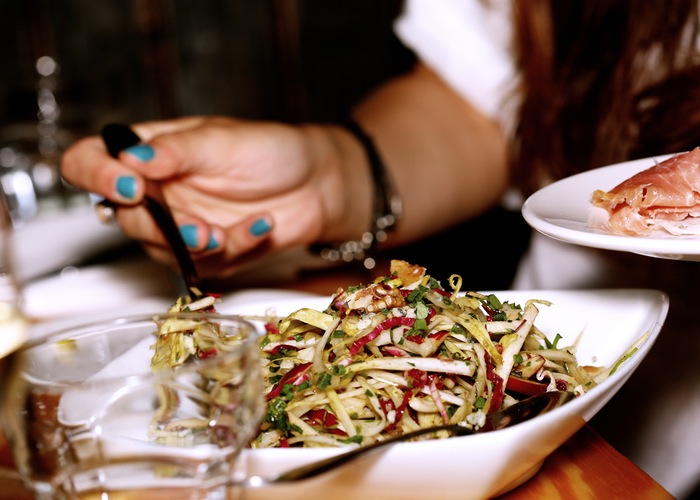 When I was a kid, I would finish lunch, and ask what was for dinner. Not because I was hungry, but because I was already looking forward to what I was going to eat next. My dad often remarks on how my appetite outpaces my brother’s. It’s truly a testament to my metabolism (because it sure AF isn’t my workout habits). In a culture where women are still supposed to want salads and chardonnay, I want meat and a cocktail. I love food. All kinds: from fast food (Captain D’s is my biggest, dirtiest guilty pleasure) to the more high brow restaurants that get written about in magazines. And in a city like Atlanta, trying the newest, hippest restaurant can go from a casual night out to a weekend hobby very, very quickly.

Which is why I wanted to take a minute and zero in on my largest discretionary expense: Eating out.

Joe Biden said, “Don’t tell me what you value, show me your budget, and I’ll tell you what you value.” Looking at my budget you’d suppose I value three things: projects on my home, traveling to see my friends, and eating out.

You know how in one episode of “Sex and the City” Carrie sits in a shoe store and wonders where all her money has gone? I had a moment like that upon my return from NYC last month, when I realized just how much money I spend each month on mindlessly eating out.

New York City was an anomaly. It’s an expensive town, I was on an extended vacation, and had a crazy schedule that didn’t lend itself well to cooking. But my spending in NYC was only a tick higher than what I’d been averaging back home in Atlanta. In an average month, I spend about $200 on groceries, and $375-$425 on eating out.

This number excludes the $100 each month I spend on lunches with clients and colleagues, and coffee at the shops I work from. I’m excluding it because it’s from a separate account/income pot, but I thought I’d include it if folks want to know what your average solopreneur spends on such things in a month.

These monthly averages are down from last year (2014) when I spent close to $5k on eating out (NOT including groceries). The lower number is largely thanks to my spending freeze for the $8k in 90 days challenge I did in Jan-March, but if I’m being really, really honest here, since ending the challenge my monthly “restaurants” budget has been out of control, echoing monthly numbers from 2014.

Vowing to do something about it, I decided to attempt not eating out for 30 days.

Why a “no eating out” challenge?

First, I just returned from two weeks in NYC where all I did was eat out, which quickly makes restaurant food lose its luster. The last time I got burnt out on restaurant food was when I was renovating my house in 2013 and didn’t have a kitchen for five weeks. Even for someone who doesn’t like to cook, that was brutal. And I’ve never looked at a Lunchable the same way again.

Second, after the hustle and bustle of the city, I was bored when I got home at the end of July.  I wanted to take on another challenge because I believe it’s important to stretch yourself from time to time, and you learn a lot about yourself.

The health benefits and (obvious) money saving advantages were of course considered, but they weren’t the real reasons I’m doing this. Mostly, I just wanted to see if I could implement a change in my life to both be healthier and spend more mindfully.

Because I decided to do the challenge at the spur of the moment, I had lunches with clients on the calendar for August already. So, in essence the challenge was already null and void.

But I decided to allow myself a “cheat” of one lunch (business-related) each week, and a celebratory date night with my boyfriend for passing his big CFA exam. Aside from that, I did a personal record-breaking 83 meals at home from July 24- August 24th.

At first, it was tough to make a change. I had to plan more meals and be more consistent with my grocery runs. I had to sit and think for a minute about how to use what I bought instead of just grabbing for the easiest thing in my fridge and pantry. Here’s one thing I did that I’ve never done in my entire LIFE: I saw bananas getting too ripe and threw them together to make awesome muffins to eat for breakfast. I felt really good about that.

Socially it was hard, especially since I work from home and so much of my time is spent there. As a solopreneur, eating out isn’t so much a means to an end, as a way to take a break for a little bit and see some folks. But, my lovely friends were accepting of the challenge- we met for drinks or cooked at one another’s houses instead of going out for fancy lunches and dinners. It was nice.

But the most remarkable change of all was how much better I got at cooking when I had to practice every day. I started putting together some really, really good meals, and while I forgot to take pictures, trust me, they were delicious. So delicious that I didn’t lose any weight. Instead, I gained four pounds. If I wanted something or had a craving, I decided to make it myself…which led to lots of delicious experimentation and (I suspect) the extra pounds.

And for all my fellow money nerds… I shaved about $225 off my monthly eating budget. I didn’t get super frugal with my groceries, since I knew I was cooking at home, I allowed myself to try new things and buy upgraded products to try to make the transition easier.

Now I’m much more aware of how much I’m spending on eating food outside my home.

But the biggest shift of all is how much I want to eat at home now, and seeing that eating out isn’t a weeknight necessity, but rather a treat to be enjoyed. For example: I just returned from three days at the beach with my family. I must’ve done a really bad job of ordering at every place we went, because with the exception of one restaurant, I hated every single meal we had out.

“I can make it better at home.” I found myself saying. And for the most part, I’m right.