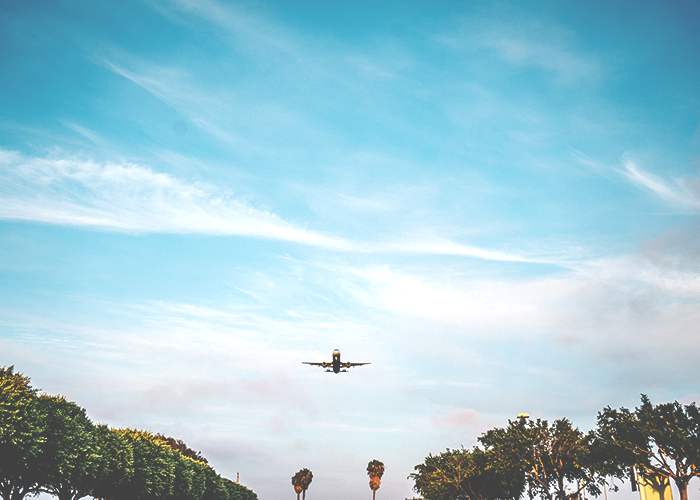 Last weekend, Marc and I were on a flight from Paris to New York after a few lovely weeks of vacation with friends and family. The last few days, spent mostly just the two of us, had been particularly wonderful and important for us — between me being a small business owner and him traveling for work four days a week, we don’t get a ton of one-on-one time — and I settled into my seat on the plane with more gratitude and levity than I probably ever had on an eight-hour coach flight across the Atlantic. Yes, there were objectively things I could have complained about, but I felt simply too happy to be where I was to find anything wrong with the seats, or the delayed takeoff, or whatever else was going on around me (that I very much might have whined about on another day).

Which is why it was so jarring when, directly behind me, a French woman of about 22 or so started loudly, ceaselessly complaining. She was seated next to her sister (who was behind Marc), and in front of what appeared to be her long-suffering parents. The sisters carried Louis Vuitton bags and were very clearly unhappy to be finding themselves on this flight to New York (for their family vacation) in economy class. The woman behind me complained about — and I promise I am not exaggerating — every element of the flight, at a decibel far louder than a normal speaking voice. People around us shot her angry looks as she yelled at her parents repeatedly to shut up, bemoaned the seats and the lack of pre-takeoff drink service, and complained about the quality of everything from the movie selection to the legroom.

At one point, she even took a little bag from the stewardess, thinking it was peanuts. “Oh nooooo,” she loudly whined, “These aren’t peanuts. These are headphones. Ughhhhhh.”

Marc and I, who had been laughing quietly at her ceaseless complaining in the seats in front of her, burst into silent cackling tears at the peanut/headphone mixup. “Marc,” I whispered, “We are in front of the worst person on the planet. We found her.”

Once we were solidly in the air, though, the complaining seemed to taper off, particularly when she was otherwise busy eating her in-flight meal (which of course prompted a dusting of preliminary complaints before tucking in) and watching her movie. During the meal, Marc and I were laughing about something or other, feeling generally positive about the possibility of a complaint-free rest of our flight, when I felt a sudden and violent kick on the back of my chair. Then another. I turned around to the seats behind me, facing the sister character (seated behind Marc), who looked at me with open disgust and frustration.

“You keep moving and my sister is trying to eat. Stop moving.”

I froze completely, frankly not used to dealing with such novelty levels of rudeness from someone who has to spend another six hours seated two feet away from you, and managed to eke out a “Wow, okay” before turning around.

This exchange, and my meek response to it, was not satisfactory for Marc. I should say here that Marc is the most generous and gentlemanly man you could ever meet — we routinely spend 15-20 extra minutes on things like planes and trains while he helps old and/or small people navigate their luggage — but he also has a near-comical level of justice and righteousness about mutual respect and politeness. Put simply, when he sees someone being an asshole (particularly to such a sustained degree, and I assume particularly to his girlfriend), he calmly and rationally goes off on them.

“Are you serious?” he asked the girl behind him, who just looked back at him, stunned. “No,” he continued, fully turning around in his seat, “You cannot be serious. That was the rudest possible way you could have said that.”

The young women both started making frantic noises of indignant aggravation, at which point Marc just looked at both of them dead in the eye and said,

“Listen, I’m going to give her [gestures to the girl’s sister who kicked me, and spent a solid two hours complaining] a piece of advice that will help her her whole life.”

At this point, the duo’s mother is yelling at him from across the two rows in a language we didn’t recognize, but Marc remained undeterred:

“We have sat here in silence for two hours while she complained so loudly we could hear it through her headphones, while people stared at her, and we didn’t say anything, and you two have the nerve to kick her because she moved while you were eating, and speak to her that way. Learn to be grateful, I have never been in the presence of someone so profoundly ungrateful, and you should be ashamed. Your family should be ashamed.”

He turned around, and this prompted a solid hour of angry whisper-shouting about him from the two sisters and their mother, whose behavior put perfectly into context that of her daughters. Ultimately, we finished out the flight in semi-steely silence, but returned home without incident. They were unbearable, sure, but they have to live out their entire lives like that — eight hours with them wasn’t a punishment, so much as a lesson: one that felt particularly directed to me.

You see, I often fear that I am an ungrateful person, period. There have been other flights when I’ve complained in a similar way (albeit more quietly and for a shorter period of time, but still). I’ve even posted on my Instagram about this specific fear, when coming home from another trip. I can feel that the more nice things I have in my life, the more I’m exposed to, the more I have to be grateful and happy for, the easier it is to slip into a pattern of fixating on what isn’t right. I frequently catch myself mid-complaint, and feel disgusted with how much I’m capable of ignoring how lucky I am, and how much of a luxury it is to be complaining at all. Every year, my life has become better in every measurable way, and that only seems to make me more bored with what I have.

When I lived in a 90-square-foot studio with a shower in the kitchen, I felt overwhelmed with excitement to have my own space. Now I live in a duplex with a stunning home office that easily accommodates four people for a work day, and I can only think of how it isn’t adequate, it isn’t perfect.

My first flight to France by myself was on the shittiest, dinkiest airline that didn’t even have TVs or real meal services, and I was literally trembling with anticipation for my new life there. I now fly Air France approximately four to six times a year, total, and can almost always find something to be unsatisfied with. If I don’t stop myself in my tracks and actively feel disgusted with my behavior, and realize how much of a toad it makes me, I could very easily slip into being that girl behind me on the flight.

And seeing how far gone she was in her own lack of gratitude, how much her entire family enabled and ensured that she would never be happy with the amazing luxuries she had, made me shudder with my own possibility. Even if I somehow managed to retain friends and a partner and my beloved TFD team, if I became that profoundly ungrateful, I’d almost certainly never be truly happy again. I’d always be two steps ahead of whatever I had, already bored with something that seemed impossibly exciting just yesterday.

The prison of dissatisfaction is perhaps the worst and cruelest we can put ourselves in — force yourself to remember what is wonderful, what is worthy, and what you’re lucky to have. Trust me, I’ll be doing it, too.