Exactly How I Could Afford To Buy A Home at 25 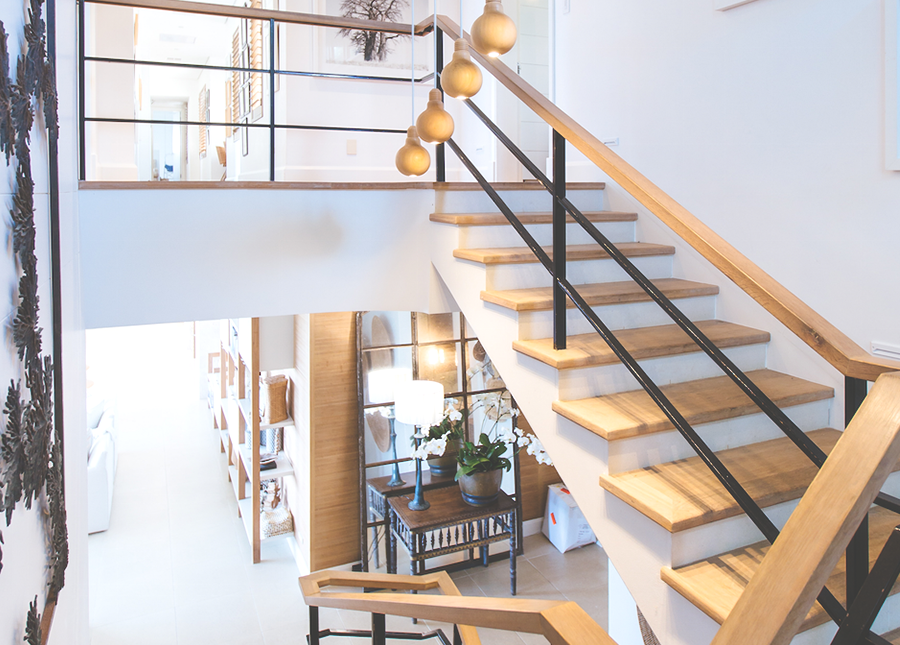 I’ve shared so many details about the decision-making process of purchasing my first home, but I’ve neglected to share what arguably could be considered the most important aspect: how the hell did I scrounge a downpayment together?

And the answer isn’t all too pretty…I’ll tell you up front that I’m lucky as all hell to be in the position that I’m in. And this isn’t just an “if you work hard enough and want it bad enough it’ll just happen” kind of story. I had help. And I’m not a fraud for saying that.

So let’s talk about the process, piece by piece, that brought me to my new home.

When I started saving, it wasn’t necessarily for a house. Even when I was earning $1,500/month at my first startup, I made it a point to save at least $500/month, just in case. I was 21, still devoted more of my “paycheck” to Forever 21 than I care to admit, and just had a general sense of what if this startup falls apart, more than one day I’ll want to buy a house.

Still, every month I put away anywhere from $500-850 into a separate account, only to have it all wiped out come tax season. That’s a life lesson: when your startup is paying you a stipend for your work, they’re likely not paying employer taxes nor withholding from your “paycheck.” Your bill will be absurd.

Soon after, we were all reclassified as actual employees, and I started receiving a whopping $35,000/year — still all sorts of illegal, though, since I wasn’t treated as an hourly employee, wasn’t paid overtime, etc. Looking back, it was absolutely a learning lesson.

But through it all, I still set regular “pretty number” savings goals for myself as my income grew:

These were goals, and they didn’t always work. Tax season, car issues, housing changes, a bad breakup, getting laid off? All of these things would throw wrenches in the system: 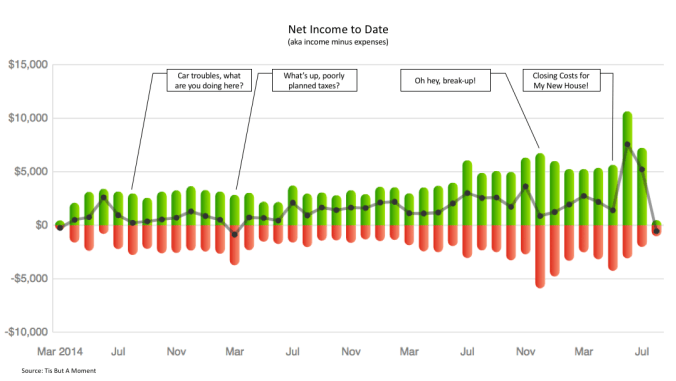 I will say, this isn’t a perfect representation. I was splitting rent with my at-the-time boyfriend for the bulk of this time, and Mint shows his portion of the rent as “income” and the full rent as my expense. That said, it roughly gets the point across.

Speaking of Mint, I didn’t start using my favorite finance tools until 2014! Since then, I’ve been using their budgeting tool to make sure I’m not going overboard on any spending. For example, holy shit why did I spend almost $1,000 on shit from Forever 21 over the past three years?!? Do I even use most of it? Did I even keep most of it? This had to stop. 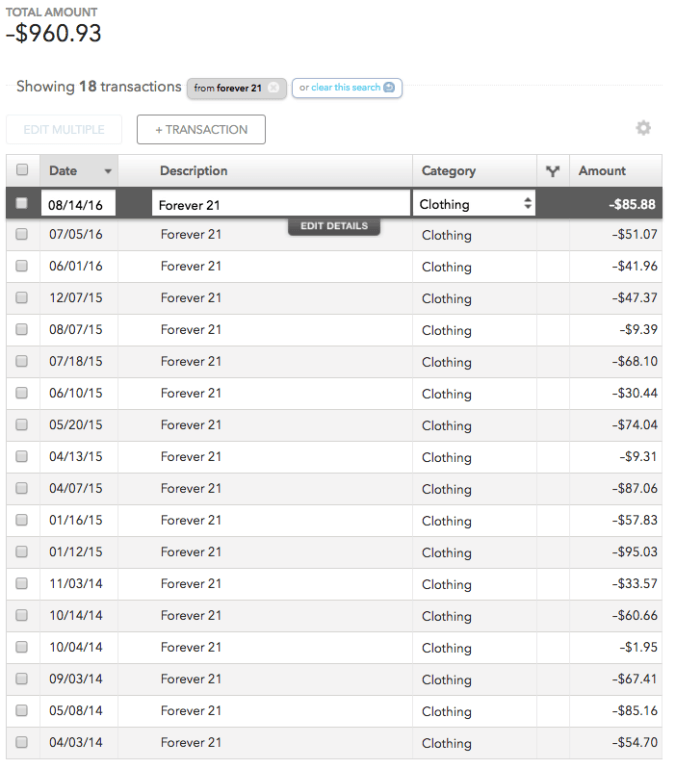 I swear, since getting Mint, I’ve been able to cut out a lot of the bullshit expenses, and speed up my savings. But I still didn’t have a goal in mind, aside from generally knowing that I’d need money to retire.

I started funneling a portion of my paycheck into Robinhood the month they launched. (This is the first time I’ve had a username that was just my first name. How cutting-edge am I?)

So, after trying (and failing) at being an amateur day-trader, I learned to passively invest by following the advice of robots much smarter than I am (looking at you, Personal Capital). Suddenly, my investments were growing on their own. This was a huge game-changer for me — ultimately bringing in over $3,000 towards my downpayment that I didn’t actually have to work for.

It wasn’t until I stumbled upon Clayton Morris’s podcast last summer that I even started thinking about real estate as an option. In it, he preaches Income Properties as gospel, and while I decided against working with his company to invest in properties across the Midwest, he did make some pretty enticing points about Buy and Hold investing (in which you buy a property and hold onto it, basically forever).

By that point, I’d saved over $35,000, plus however much I could invest via Robinhood at the time: 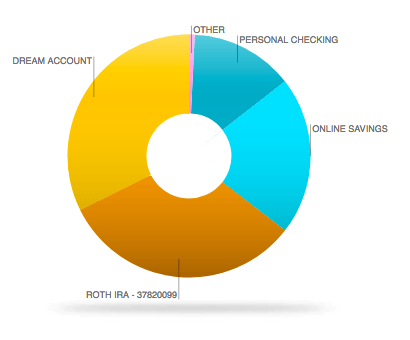 All in all, it was roughly $40,000 — some of which I could not use for a downpayment. I did, however, start thinking about investing in those income properties in the Midwest, where $10,000 is a downpayment on its own.

I did my research and was just about ready to commit to the new hunt when I got dumped and suffered a serious heartbreak — losing my bright 1BR apartment right on the Marina, at half the rent. So long, $1,375/month living costs. Goodbye, sea lions.

So, when reality hit that a 1BR apartment within biking distance to my job cost just under $2,500, I changed course and decided to save for a home of my own (and the lower monthly costs that come with it).

Looking at the market, I knew it would take another year or so to have the full 20%. I went forward, anyway. Just buying (and eventually refinancing) would let me save and invest money faster than if I waited for the full 20%. I’m talking a difference of over $1,000/month, even with the less preferable rate and higher payments.

That said, when people tell me that their rent is $1,300 for half of a killer 2BR apartment on a lagoon with, I kid you not, fucking egrets outside your window even though you live in Los Angeles? Yeah…maybe wait that one out. The market is climbing like crazy, and this is purely speculative, but I went into my purchase with the expectation that the market will crash — or at least deflate a little bit. If/when it does, you better believe I’ll be buying again.

But Something Will Always Go Wrong

And finally, thanks to Murphy’s Law, I almost lost the place entirely. This happened because my appraisal came back at $15,000 less than what I’d offered. This meant that the mortgage company would only pay up to the appraised value, and I needed to cough up an extra 15K to the seller to get my new home. I’m so lucky to have gotten help at that point, because there’s no way I could have moved forward without it.

I talked through my process to reduce the difference down to $7,500, but that was still a major chunk of change for just little old me. I’m so thankful to say that my grandparents offered to chip in a nothing-to-scoff-at $5,000 towards my house, with the promise that if things fell through, it’d go straight back to them. My parents also offered $1,800 as a loan, which I was able to pay back over the following two months.

But that $6,800 was the difference between being able to afford my home and losing it all based on one appraiser’s opinion, which ultimately has been rescinded — they now value my home at about $25,000 higher than they had just a few months ago. So it goes.

So, if you ever read this, thank you so much, Mom, Dad, Grandma, and Grandpa. I worked hard, saved, planned, and thought I did everything right — but I would not have been able to do this alone.

So, it took a long time to save the money, and ultimately despite my planning it still wasn’t enough. I’m so thankful to be in a position where I could afford to make the leap — and had support when it came down to it. I know not everyone is so lucky when their appraiser comes in last minute  with some bad news.

Still, if I have to take anything away from this, it’s that there are smart ways to plan savings, and smarter ways to use them. Investing in Robinhood and my IRAs gave me a cool $3,000 more than I would otherwise have. Oh — and I’m happy to say I’m not spending a cent at Forever 21 moving forward.