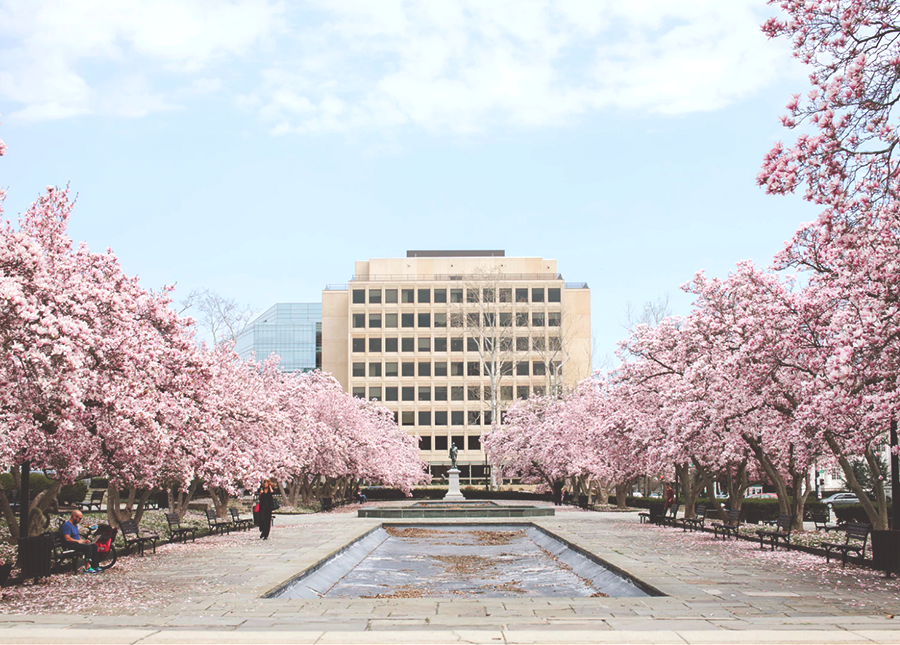 Between my junior and senior years of college, I embarked on (what’s sadly become) a rite of passage for any aspiring leader-in-training — an unpaid internship in Washington, D.C. As I’ve written about before, even though I’d never call myself or my family “poor,” I definitely had much more limited financial means than many of my comparatively-more-privileged Ivy League classmates. Even though what I was doing wasn’t uncommon, many of my friends doing similarly unpaid internships in really expensive cities benefitted from parents who could help them out with rent and other expenses — a safety net I didn’t have. Still, I knew that with paid internships in my field being few and far between, and internships being ultimately necessary for my long-term career goals, I’d need to find a way somehow to make it work.

I decided that to live a really barebones existence, I could probably make it work on around $1,000 a month. Plus, I knew most apartment buildings would charge a security deposit generally coming out to around one month’s rent. For a 10-week summer, that meant coming up with about $3,500 in total (plus a little extra in wiggle room). I came up with this a few different ways. First, I worked multiple on-campus jobs through the academic year (cashiering in a dining hall and tutoring ESL students) and saved 50-75% of every paycheck in a separate account. Then, I charged the person subletting my off-campus apartment a security deposit, and I used that to pay the security deposit on my DC place. Finally, I lined up a few side hustles while in DC (mostly around freelance writing) that ensured I had at least some money coming in over the summer.

These three things combined meant I started the summer with enough money to cover my security deposit, rent, and around $200 each month for food, transportation, and fun things. It’s the least amount of money I’ve ever lived on, and while it wasn’t the easiest summer, I found ways to both make it work and have fun doing it. Here’s a breakdown of how I made it happen.

Housing: I ended up searching for housing with one of my best friends from college, who was surviving on a similarly strapped salary. On Craigslist, we found an ad for a basement room in a Georgetown rowhouse that cost $1,500 a month for both rent and utilities. The guys living in the house were open to us sharing it, and it came with our own bathroom and a tiny kitchenette (read: a fridge and a microwave), so we each ended up paying $750. The room was basically only big enough to hold two beds and a bureau, and we set up a divider curtain for privacy. Luckily, we got along great, so it ended up working out really well. The house had been lived in by several generations of frat bros, so overall, it was in pretty gross shape — but the house was much more conveniently located than the better-quality-but-equally-priced houses further out, and it was close enough for us both to walk to work. Total: $750 a month.

Transportation: The only compensation I got for the summer was $25 a week to cover transportation to and from the internship. I took the bus to work every morning from Georgetown to Dupont Circle, so I could arrive at work clean and unwrinkled, then walked home (around 30 minutes). The DC Circulator cost $1, so I ended up saving $20 a week, which I added to my “fun budget” — it actually managed to cover one or two happy hours a week! On weekends, honestly, I walked a TON — around Georgetown, near the monuments, up and down Embassy Row — and only took the Metro when really necessary (like out to the Zoo or U Street). It helped a lot that my friend was as broke as I was and the two of us had nothing to do on weekends except sightsee — walking for hours on end is a lot more bearable when you have a friend to do it with! Total: $20-40 a month.

Groceries and Eating Out: I can count on one hand the number of meals “out” I had all summer which, as a self-described foodie, was probably the most challenging part of the summer — I basically couldn’t afford to eat out, or even at home, cook things that were all that fancy. I budgeted around $50 a week on groceries, and bought a lot of rice, beans, lentils, pasta, and usually some chicken or ground beef for protein. (This was also before I started eating like a legit adult, so vegetables — other than baby carrots — weren’t really a huge part of my diet. Don’t @ me, I’ve changed, I promise!) As a good South Asian girl, I arrived with a cupboard full of seasonings and spices, so even though my meals were pretty basic, they generally always felt really tasty and satisfying. I did budget for at least one or two hangouts with friends — I quickly picked up a group of girls who were also on similarly tight budgets, so we made a point of discovering every affordable happy hour DC had to offer. $10 would usually get us a drink (or two) and some nachos to share, and this turned out to be a great way to hang out with friends and feel like I was “going out,” without breaking the bank. Total: $250 a month

Entertainment: This really was the summer of figuring out how much fun one can have for free. Being in D.C., I had access to some incredible museums and monuments for free. I spent multiple weekends at the National Zoo hanging out with the pandas. I’m also a huge reader and discovered the joys of a (free) D.C. Public Library card, which let me check out a ton of books and e-books. This meant I spent a lot of weekends on the waterfront with a good book (or three). A relative gifted me photography classes through the Smithsonian, which took place a couple days a week after work, and in addition to being a great way to see some cool parts of the city, was a great way to spend time. D.C. ended up being a particularly great city to have fun for free, and since my budget was so tight, I’m fairly sure I didn’t spend much, if any, money on it all summer.

Here are my takeaways:

Unpaid internships are the worst — they perpetuate class divides, they’re generally only accessible to a really privileged percentage of the population, and they force basically everyone else to resort to superhuman tactics (or take on more debt) to afford them. A lot of companies can absolutely afford to pay their interns, and don’t — and in a city like D.C., where the White House, Congress, and most government agencies set precedents for everything, the fact that these institutions don’t pay their interns gives license to basically everyone else to do the same.

Though I had a lot of fun over the summer, there were also clear costs. I was stressed about money constantly. I was incredibly lucky to have found an affordable living situation with a  roommate I loved, but had we not gotten along, it would have been a miserable experience. Over the summer, from walking all the time and eating such a basic diet, I lost almost 20 pounds. And while I definitely had gained weight in college to the point that even this loss still meant I was at a healthy weight for my height, in retrospect, it was a little scary to have lost so much weight in just a summer without meaning to.

I’m also really lucky to have had a support system in terms of friends who were going through similarly constrained circumstances — a lot of what I did, from basically never eating out to the walking-as-entertainment-model I adopted, wouldn’t have been as easy to stick to without friends willing to go along with me. And at the end of the day, even to afford this fairly basic lifestyle, I still had to work and save for almost a full academic year to make it happen. It shouldn’t be this hard to get experience. It shouldn’t be a requirement to work for free to start out your career. My experience taught me that it’s definitely doable to live in a really big city on a really small amount of money (and I’m lucky that I only had to do this for less than three months — for many people in expensive cities, where homelessness and urban poverty is on the rise, this is their everyday life, rather than a temporary experience). But it can also be really hard, really isolating, and really stressful. It definitely shouldn’t be a mandatory experience to “get ahead” in the workplace. Unfortunately, it’s all-too-quickly becoming a common one.

Meghan Koushik is a cheese enthusiast and law student in California. You can find her on Instagram and Twitter.