Graham Stephan On Privilege, His Upbringing, & Playing To Your Strengths 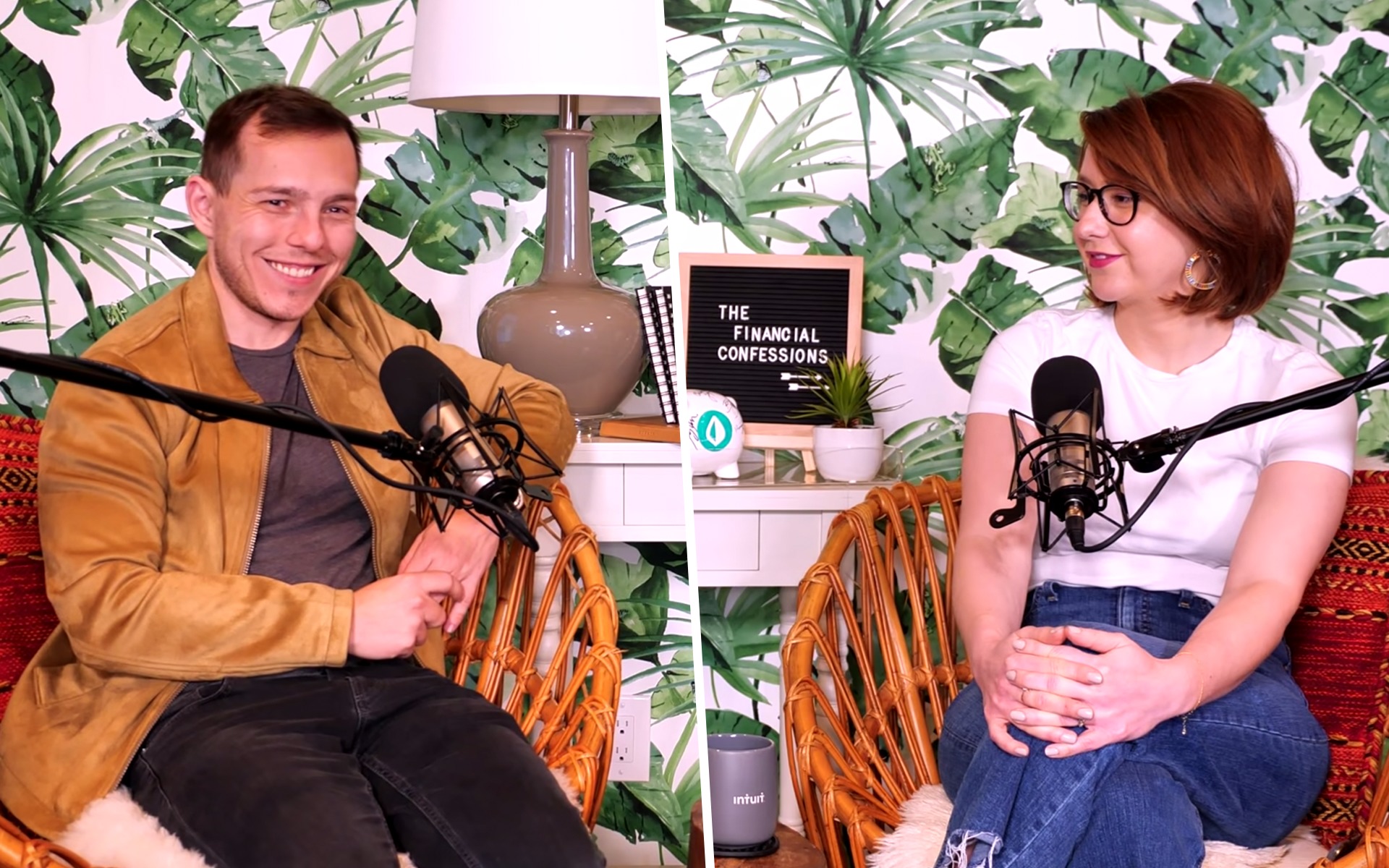 Each week on our new podcast series, The Financial Confessions, we’ll be sitting down with a new guest to talk all things money, getting ahead in your career, and the financial insecurities that make us tick. In this episode, Chelsea spoke with YouTuber and real estate investor Graham Stephan. Read on for an excerpt about the subtleties of privilege. Listen to the full episode here or scroll down for the full video!

Chelsea: I asked my Twitter followers what they would love to hear from you. One of them asked: “I saw him in a Jubilee YouTube video earlier this year. And he agreed with the statement, anyone can become rich if they work hard enough. So what are his thoughts on how privilege affects your financial life?”

What do you mean by privilege? How would you define that?

I would give a very – I actually just, in our last interview that we recorded, gave what I think is a pretty clear-cut example, to me, of privilege. So I came from a background where I did not have a lot of money growing up. And I – mostly through my own idiocy – completely destroyed my credit, went into default, did a bunch of terrible things as a late teenager, early 20-something.

And I did take it upon myself to take steps to rehab my credit that were accessible to everyone. I got a rehab credit card. I took steps with my bank. But the number one thing that allowed me to completely transform my financial life in a relatively short period of time is that my husband has excellent credit and was able to put me on his credit cards, and was able to –

That’s how you do it.

And very similarly, I was able to start what is now a profitable business that employs a lot of people, relatively, because I was able to not take a salary for two years because my husband has a good-paying job that had health insurance on which I was a domestic partner and, therefore, a beneficiary.

Yes, of course, I think I had a good idea. I think I worked hard to build these things. I definitely took as many steps as were in my own hands. But as a direct result of having that relationship in my life, I was able to achieve things that I never ever otherwise would have been, at least not in that span of time. So that, to me, is what privilege is.

Got it. I think we’re, honestly, all born with strengths and weaknesses. And I think there are some people who are predispositioned for certain things. I would say sports is one of those things. You could be a really talented person, but some people are predispositioned to be an amazing football player, or such a good basketball player, or be really good at boxing, or wrestling, or whatever it is. So I think we all have strengths that we can play to.

And I almost think of life, and making money, and stuff like that as almost a game of playing poker. So sometimes, people are dealt a really good set of hands. And they can play that really well from the very beginning without much effort. If you get two or three kings in the very first day, you’re going to do well. But other people, I think, who have a pair of twos or whatever can certainly bluff their way and play to the strengths.

In terms of me, specifically, I think I certainly had some advantages and some disadvantages. If you looked at me from just being – I had terrible grades. I didn’t go to college. Statistically, I should not have been successful whatsoever. But I had an interest in working hard, and making money, and saving as much as I can, and really taking an interest in investing. So I think that helped.

Hmm. Well, kind of on that note, actually – and it’s funny, because it’s kind of become a meme at this point in the personal finance world. So most of the people that I would say follow TFD are not what I would refer to as personal finance nerds. They are people who are definitely looking to get better with money, but they’re not into the gamification of money as much. And so they’re very much like –

I’m sure you’ve probably seen, there’s this meme now where a story will go viral on Twitter that’s, like, this 22-year-old saved $100,000. And then, by paragraph three of the article it’s like, and then her parents gave her a small portion of their real estate holdings, or they paid off her debt, or what have you. So I think for the people who follow us, it’s definitely become almost a trope of the personal finance industry that, once you scratch beneath the surface in success stories, there’s often that kind of thing. And so to that point, the most common question we got was some variation of this, which is, how did he get started with real estate? Did he get any startup money from family, friends, bank loans, anything?

No, I did not. I was really lucky that I had two parents that were really, really supportive of anything I did. And I was lucky to be born into a family where neither of my parents were abusive. Neither of them were into drugs, or alcohol, or anything like that. And I grew up in a supportive household where both of them really encouraged me to pursue my dreams, whatever that would be. And they supported me from that angle.

I didn’t get any help financially from my parents, in terms of them going and giving me money, or anything like that. But in terms of emotional support, absolutely. I think it was a 10 out of 10, in terms of that.

So you financed all of your initial real estate acquisitions through money that you had generated through being on YouTube?

Yeah, even working as a real estate agent, I paid for all of that out of pocket. I started working when I was 12 years old, after school, doing marine aquarium photography.

So weird story, how this started.

I got a saltwater aquarium when I was 11 years old. So yeah, so I did receive some assistance from my parents when I was –

That asset, your portfolio.

– as a kid. No, really, my dad did end up getting me a saltwater fish tank for Christmas. And that got me so obsessed with saltwater fish, I went on those website called reefcentral.com. It was a forum.

Yeah. And it was a forum where people could go in and talk about saltwater aquariums and ask questions – stuff like that. I had spent hours a day on reefcentral.com learning everything I could about saltwater fish. And there was this company that sponsored reefcentral.com and it was called the reefer madness.com, or reefermadness.us, at the time. We could bleep that out. It’s a reef tank, you know?

Can you imagine bleeping that out?

They were one of the companies that was at the top, sponsored banner ads on reefcentral.com. And I just happened to randomly meet the owner, Chris, at one of these aquarium places. And I was so into photography, and taking pictures of reef tanks, and stuff like this. And he offered for me to come by his shop, and I did.

And I started taking pictures of his livestock, and stuff like that, that he was selling. And he offered for me to come in after school if I wanted to take pictures of stuff. And he wasn’t going to pay me, but he would give me little pieces of coral and stuff like that afterwards. So I would beg my mom after school to go and drive me so I can spend a few hours twice a week. I would go on Tuesdays and Wednesdays, or whatever, taking pictures.

But it got to the point, eventually, where I started getting paid. And I started getting paid either hourly for the time that I was there, or I would get paid $1 for every picture I would Photoshop of their livestock and put it on their website. So at that point, it was really so much fun for me to go on Friday nights.

When I first got my driver’s license, that was when I started skipping school, because I’d rather go there and work. But I would either skip school, or I’d go Friday after school and work until midnight just taking pictures. And it was fun for me to see how many pictures I could take.

There were some nights that I could make $120 in a night. And doing that at 16 years old was so much fun. But I saved all of it. And I saved a few thousand of that. And that’s the money that I used to get my real estate license and to pay for all that stuff.

That is such a pure back story.

But no, but I did have supportive parents. My dad even had the ability to go and be like, here’s a saltwater fish tank for your birthday.

And you know what? Yeah.

So stuff like that, absolutely. I know there’s a lot of people out there that didn’t even have anything remotely resembling that.

And I think that’s so important, cause I think a lot of people – like, the privileges that I outlined, I think, are very clear-cut financial ones. But a lot of people won’t even acknowledge that to have a stable, loving, supportive home of two parents is in and of itself an enormous privilege that is not available to everyone. Something that we have recommended a lot on the channel for people who are looking to either get out of a bad financial situation or save a lot in a short amount of time, obviously, is to move in at home which is, I would say, amongst all the privileges, one of the more accessible, but still not accessible to everyone. Not everyone has a good home that they can move into.

So props to you for acknowledging that as a privilege.