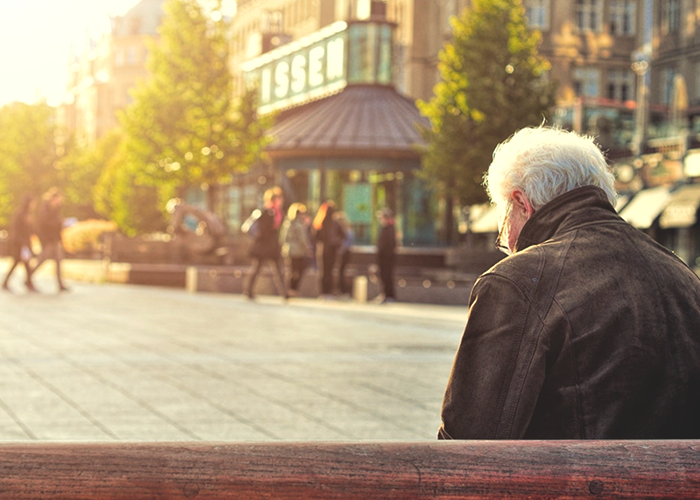 Watching someone you love slowly die of something you cannot prevent or lessen is the worst form of emotional torture imaginable. I wouldn’t wish the experience on my worst enemy. But life doesn’t care if what it throws at you is hard, impossible, unimaginable — it presses on, and it’s up to you to decide how to deal with it. It’s an unfortunate inevitability of life that one day you will have to take care of a sick loved one. And if you don’t, that’s because someone is probably taking care of you.

Most people hope that this occasion will take place later in life — in their forties or fifties, when they’re more prepared. Whenever it happens, it’s devastating. I was called upon in my mid-twenties. Eventually, most children must switch places with their parents and take care of them as their own. The role-reversal is a full-time gig. Being a caregiver is one of the most important jobs in our society, and also the most unsupported.

My father became sick two years ago, when I was 23 years old. He had several health issues sending him in and out of the hospital over the course of those two years. Every time he went in, a new crack formed in the roof he had built over our heads. Imagining life without his comforting presence was impossible. After surviving a successful liver transplant in early 2016, my family thought the worst was over. We had a brief period of stability and optimism for the future…but then my father was diagnosed with cancer. It was terminal and incurable.

At first, we were told he’d have two years to live — if the chemo worked. Unfortunately, it never did, and the time we had left was shortened significantly.

Throughout this time, I was living out of state and flying back and forth for different surgeries and procedures. I knew that, eventually, I would have to leave LA and move back home with my parents to help my mother take care of him, but I didn’t know how soon or how long that time would be. I was stressed out about all the things I would be putting on hold. I would be leaving my job on a TV show and my live-in boyfriend behind.

But I was in my mid-twenties, and I was about to spend the rest of my life without my father. The idea of not going home was unfathomable. After going back and forth between states for short trips, I eventually made the decision to pack up and go last February.

In hindsight, I should have left my job sooner. But I really thought I had more time. I thought I had at least a year. When I got the call from my mom that the chemo wasn’t working, we were given a couple months at best.

I hated having to factor in the financial aspect of leaving my job and how that would impact me in the future. When things are literally life and death, none of that should matter, right? To some extent, of course, but I still had to make the necessary arrangements. Because a large part of your adult life is spent being an assistant to yourself. I signed up for family leave in the state of California, which provided weekly benefits that would cover my rent in LA while I stayed with my parents. Not every state provides assistance like this, and I shudder to think how hard it is for caregivers to support their loved ones while either still working or going into debt. It should be noted that family leave in California only lasts for six weeks. After that, you’re on your own.

My father died almost six weeks after I came home. Just around the cut-off. There are a lot of people who struggle with cancer or a terminal disease for much longer. I’ve heard stories of children and spouses who took care of their loved one for years without work. The fact that there isn’t a better system in place to support people who are doing the full-time job of caring for another human being is maddening, especially because that time is so precious to them. Add in growing medical costs plus the costs of keeping a household, and the sum is a disaster.

Factor in what happens after your loved one dies, and the financial burden continues. There are funeral costs, bills for therapy, etc. I personally could not bring myself to go back to LA immediately after. I took a couple trips with money I didn’t have to see family and friends I hadn’t seen in almost a decade. When I finally did come back, I had trouble finding a regular full-time job. I’ve been on and off unemployment for four months. The financial burden has followed me through my attempts to work through my grief and feel human again; it will be there for years to come. I know I am not alone in this. Thousands of families live with this burden.

I look back at the time I spent at home with my father, and the sacrifices I made to be there. It was the hardest thing I have ever done. During my time at home, I always worried if I was doing enough. Was I trying hard enough to get him to eat? Should I have been forcing conversations I knew we wouldn’t get the chance to have unless I did it now? Should I have been trying harder to brighten his mood? Distract him with a silly video of a dog falling down stairs? It’s anxiety-inducing and soul-draining to constantly wonder if you are doing enough.

But there is one moment I can point to where I felt that I was able to minimize my father’s pain, to soothe him. It was when I gave him a manicure and pedicure. In all his 68 years, he had never gotten one, and in his last months, he found himself wanting to get a haircut, to get a massage, to be pampered. It seemed that physical care was one of the few things that made him feel special and human again. My father was never particularly physically affectionate, but in his last years, it seemed a hug or squeeze of the hand communicated more than words ever could.

His hands, arms, and feet had been getting extremely dry and cracked from the chemo and the constant poking and prodding of needles. I finally said, “Dad, let me cut your nails,” because he didn’t have the strength to do it himself. I got a bucket of warm, soapy water and put his hands and feet in it. I cut his nails carefully and filed them down. My dad thought that would be it, but I got lotion and massaged it into his hands and feet. It helped with easing tension and making his skin look better than it had in weeks. Chemo and cancer have the ability to completely exhaust a person and take away their sensitivity. I don’t think my dad was able to feel his feet most of the time, from swelling and low blood circulation. For a half hour, I had taken his mind off his sickness and make him feel more comfortable.

When I was done, he thanked me. I said, “Of course, Dad.”  Then he said, “Thank you for coming down here and taking care of me all this time.” I hugged him and said, “Anything for you, Dad. Anything for you.” And I meant it. When you love someone, you have to be willing to do anything for them. This was the first time in my life, I was able to see that I could.

Whenever I find myself doubting whether I did enough to help him, I remind myself of that moment. There’s only so much people can do with the knowledge and tools they have at the time. The sacrifices before and after this experience have been difficult, but they were worth it. I wouldn’t trade them for the extra time I got to spend with my father.

Born in Arizona and raised overseas, LA is the weirdest place Lena has ever lived. Lena Olson does improv at UCB, sews for fun, and works in TV. She’s hoping to get a dog someday to match all the other hikers in Griffith Park. You can follow her ramblings on Twitter, her political blog “The Future Looks Like Us,” or her podcast We Go Weird Places.