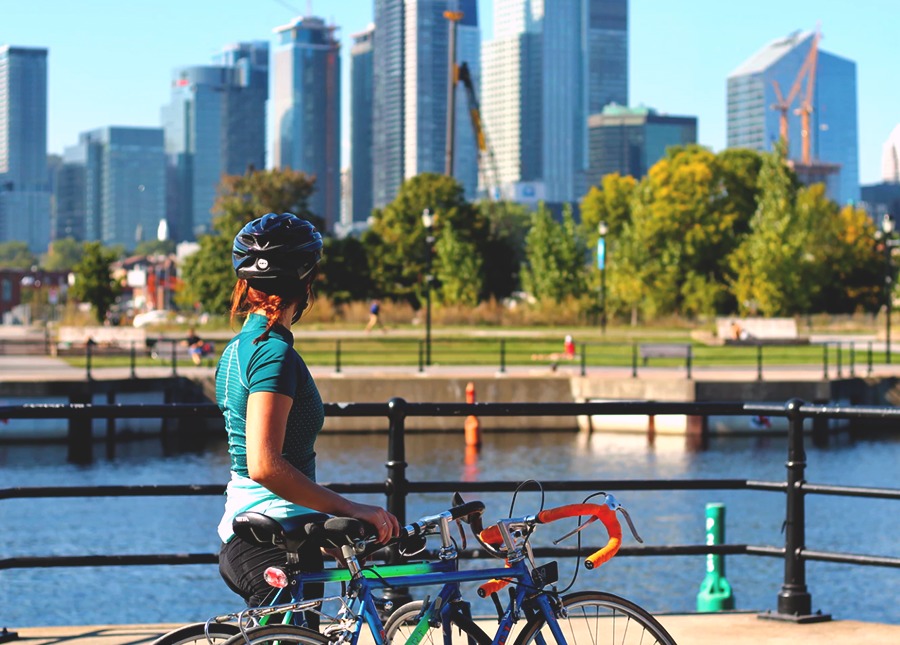 I climbed on a bike just over two years ago for the first time since I was a kid. And you know what? It’s just like riding a bike. Okay, bad joke — but really, biking is super fun. I bought a cheap bike on sale at Canadian Tire and the bf and I (he had an old bike) went on lots of leisurely bike rides. That was it, though. We didn’t use our bikes as a form of transportation. They were strictly for fun. Why? Well, we live close to downtown, and my confidence level was basically zero when it came to biking in traffic.

The following year, Edmonton made a big effort to improve the biking infrastructure in the city. Separated bike lanes were installed around much of downtown, and our neighborhood was now connected. We could make it almost from our front door to the downtown core entirely on separated bike lanes. Hello, confidence!

The bike lane project is controversial. Edmonton is car-centric. People drive, a lot. It’s not unusual for people to commute in thirty plus minutes a day from the suburbs to downtown. I think things are starting to change, but living and working central still aren’t the norm. And those commuters? They hate bike lanes. The lanes take up room on already crowded roads, and they weren’t free. Now, relative to the cost of creating roads out to the suburbs (don’t get me started about the cost of new neighborhoods), the bike lanes are ridiculously cheap. They also take cars off the road. Obviously, I’m pro-bike lanes. Their creation has changed how the bf and I get around.

Last year we sold our second vehicle. It was no longer a necessity, and it was rare not to have at least one vehicle sitting unused in the garage. I usually walk to work, and the bf was either biking or taking the bus. We decided to sell his Jeep and use some of the proceeds to upgrade our bikes.

Turns out there’s a pretty significant difference between a decent bike and a crappy one. And if we were going to be using our bikes as transportation, we figured we would splurge. Late last summer, we each spent about $800 CAD (~$610 USD) on new bikes. I know, it’s a lot. It’s a big reason why I’m writing this post in the first place. I wanted to break down the cost savings of biking so that I could justify the expense.

I’ve got a quick story to tell before getting into the numbers part of this post. I was about halfway through pulling the data together for this when tragedy struck. My bike was stolen! I woke up one morning, and our back gate and garage door were wide open. Some asshole broke in and stole my bike that was LOCKED UP in my garage. (Full disclosure: Our detached garage is about 900 years old, and the door doesn’t actually have a lock on it, so yes, the garage was unlocked. My bike was only locked up with a cable lock because my tougher U-Lock doesn’t fit around the two by four we lock our bikes up to. The bf’s bike had a better lock and was left untouched.)

There was more than a little cursing, a hastily written police report filed (thank god for online filings), and a bit more cursing. I figured I was out an $800 bike. Shit. Not only that, I wouldn’t be able to publish my half-written post because there’s nothing frugal about having an $800 bike stolen!

But wait: this story has a happy ending. Only a few hours later I got a call from the cops, and they had my bike!!! Turns out the asshole thief ditched it about twenty blocks away in the driveway of another house and traded up by stealing two other bikes. I sure hope those people had their bikes returned, but I had to laugh imagining the thief being embarrassed riding a women’s bike and ditching it for something more manly. So my bike got a free ride home in the back of a cop car and now has a home in the basement instead of the garage. And now, I can publish with the added public service announcement to lock your bikes and garages, and don’t forget to take pictures and record your bike’s serial number.

Back to the real reason for writing this post; the numbers. That was a longer than expected interlude! Sorry about that. Because I’m a money nerd, I created a spreadsheet to track every time I used my bike as transportation and included the cost savings for both gas and added expenses like parking. Here it is in all its glory (*all numbers in CAD): 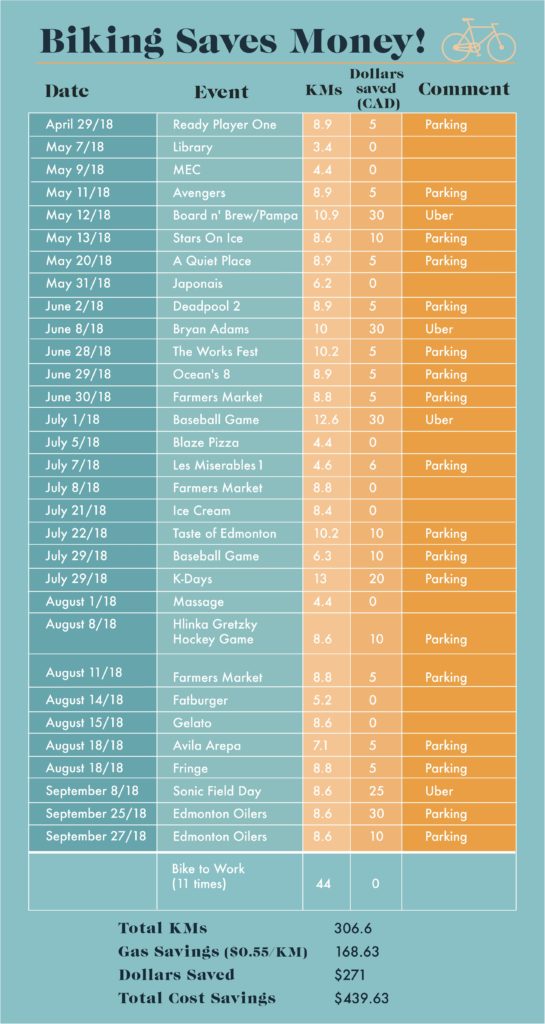 I know I could have bought a cheaper bike or a used one for even more cost saving. I like my new bike, though. It’s easy to ride and encourages me actually to use it, and it will last me for years. One thing you might notice is that I only biked to work 11 times. You might be wondering “why not more?” I prefer walking to work. It’s about a 20-minute walk, and I use it to keep up to date on podcasts or listen to audiobooks. Biking is faster but walking is more relaxing, and a nice way to start and end the day. The days I biked to work are days when I would normally drive. Usually it’s because the weather is a bit sketchy or because I’m running late.

Biking saves money, we’ve established that, but it also has other benefits you won’t get from driving. It’s good for you. By using your bike to commute you get a built-in workout. Or, if you’re biking to get ice cream, you can count it as a wash since you’re burning calories to get there. Don’t look at the spreadsheet again; I definitely never did this.

You’ll also be doing good by the environment when you choose your bike over your car. No emissions polluting the air while you sit in traffic. And that’s another thing! There’s no sitting in traffic. The bf has been riding his bike, and it takes him less time than if he were to drive (and find parking) or take the bus. If he were as much of a spreadsheet nerd as I was, his numbers would be even better than mine. I bet he’s paid his bike off in full from this one summer.

I’m happy we became bike converts this year. It’s saved us money, made us get out and exercise, and reduced our carbon footprint. Triple win.

Tell me, are you a fan of biking? Do you use your bike for fun or as a mode of transportation?

Sarah is a Canadian personal finance blogger over at Smile & Conquer. She has been working in the world of finance for almost a decade and uses that experience to help other millennials get smart about their money.