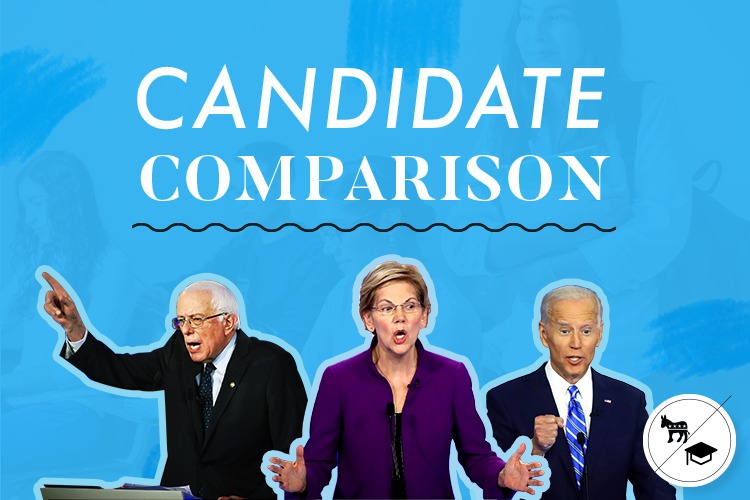 This is a series on the 2020 Democratic presidential primary election. We’ll be breaking down how each candidate in the race stands on a handful of important social issues. Today’s issue? The student debt crisis. For a quick summary, check out our infographic at the bottom of the post.

Like many other Americans, I’ve been closely following the 2020 presidential race. And like so many in my generation, one of the issues I’m most interested in is how each candidate plans to tackle the student loan crisis.

According to the U.S. Department of Education, student loan debt in 2020 is at an all-time high. Collectively, borrowers owe nearly $1.6 trillion. My husband and I are not immune to this crisis. Between the two of us, we have over $100,000 of student loan debt, and like so many of our friends, our loans earn interest faster than we can pay them off.

We are a part of a generation where many have had to put dreams on hold for a decade or longer to focus on paying down student loans. It’s clear that the results of the 2020 election could have a significant impact on our wallets and our futures.  With all of this in mind, here’s how each of the frontrunners in the remaining presidential Democratic primary election plans to fix the student debt crisis.

Senator Bernie Sanders has stated that if elected president, he plans to cancel all existing student loan debt. This would eliminate all $1.6 trillion of the existing debt. Sanders would also cap future student loan interest rates at 1.88%.

In addition to this plan for current student loan borrowers, Sanders wants to remove the student debt burden for future generations by eliminating tuition and fees for four-year public colleges and universities.

In an effort to make college more affordable for low-income individuals, Sanders would expand Pell grants to cover non-tuition costs for low-income students. These costs could include housing, books, transportation, and other costs of living.  Sanders plans to pay for his proposals with a 0.5% tax on Wall Street stock trading, which would raise $2.4 trillion over the next ten years.

You can find more of Sanders’s student loan proposals here.

For those who already have student debt, Biden has proposed simplifying income-based repayment plans and forgiving student loans after 20 years of payment. He also hopes to expand the Public Service Loan Forgiveness program and ensure that student loans can be discharged in bankruptcy.

You can find more of Biden’s student loan proposals here.

Senator Elizabeth Warren has also promised to cancel student loan debt on “day one” of her presidency.

Like Sanders, Warren has also stated she will push Congress to pass legislation to provide free tuition for public universities and will increase Pell grants to cover the living expenses for low-income individuals.

You can find more of Warren’s student loan proposals here.

In addition to addressing how we can make college more affordable, Bloomberg has a plan to address graduates who already have student loan debt. He plans to implement an automatic income-based repayment plan and ensure that borrowers don’t pay more than 5% of their discretionary income toward their loan repayment.

To pay for his plan, Bloomberg proposes a tax increase on the rich, primarily in the form of surtaxes, capital gains taxes, corporate taxes, and estate taxes.

You can find more of Bloomberg’s proposal here.

Where other candidates stand

Representative Tulsi Gabbard Gabbard has publicly stated that she supports making college more affordable, though her website doesn’t outline a particular plan to make that happen.

Gabbard has addressed the student loan crisis through legislation she has sponsored in Congress. She supported a bill in 2015 to allow for the discharge of private student loans in bankruptcy. In 2017, she supported a bill to create a grant program to make community and two-year tribal college free for everyone and to make four-year public colleges free for working and middle-class students.

Student loan debt is undoubtedly an important campaign topic for many American families. Whether you’re struggling with student loans or are anticipating sending a child to college in a few years, it’s an issue that affects nearly all of us in some way. The first step is getting informed and finding candidates whose values and priorities align with your own.