How Growing Up Poor Impacted My Thoughts On Parasite 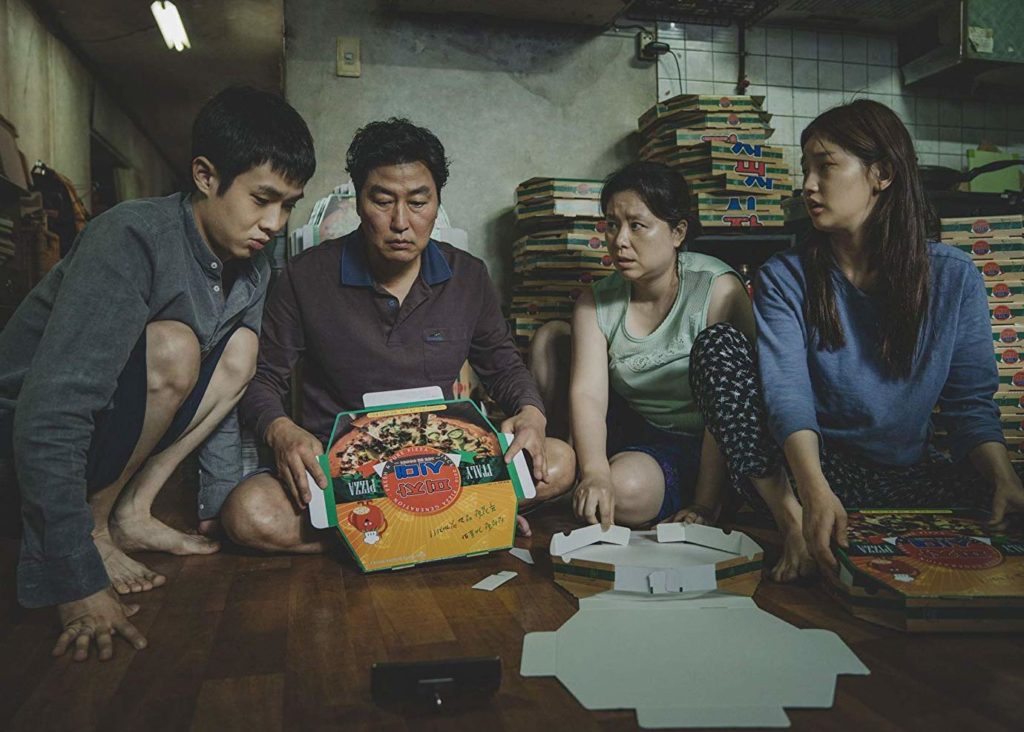 I walk out of the movie theater; behind me is a very “American” upper-class family: a dad (probably called Richard) and a mom (probably called Carol) and their two kids (let’s call them Ashley and Brian). They talk about how amazing Parasite was, especially about the symbolism of the word “parasite.” Throwing her soda can into the trash, Carol says, “Yeah it’s a shame. But we should look into installing a better security system at the house. I am a little paranoid now.” “Moooom,” sigh their teenage children.

All I can think is Shut up, Carol while trying to get my anxiety to go away. The family walks out, gets in the car, and drives to their house that is probably about to get the latest and most advanced security system that Carol saw on a TV commercial (because let’s be honest, Carol probably still watches TV commercials) or perhaps she got it from some episode of Shark Tank.

Parasite is a 2019 South Korean black comedy thriller directed by Bong Joon-ho. The story revolves around two families: the Kims, who are trying to make ends meet, and the wealthy and glamorous Parks. The Kims live in a shabby half-basement apartment in a lower working-class area. Without even knowing it, they literally smell of poverty — something the Parks make comments about throughout the film. By a lucky coincidence, the Kims ingratiate themselves into the Parks’ lives, one by one. Mr. Kim takes the job as a chauffeur to Mr. Park, Mrs. Kim takes the position of a housekeeper in Parks’ house, and their two children both tutor the Park children, in English and Art. The deliberate scheme doesn’t go as planned when the Kims find out that they are not the only ones “leeching off” the wealthy Parks.

The truth is that if you watched the movie and you have never experienced poverty, you probably did not get emotionally drained, like the rest of us, having flashbacks of feeling inadequate and worthless. Carol has the luxury of feeling bad about the crippling poverty of fictional characters, and feel good about herself for discussing the topic with her friends where she occasionally throws around a few statistics that make her seem just so well-versed in the issue, and then she gets to go home and never think about it again…until the next hot topic on Twitter demands her brilliant input.

It’s a different movie-going reality for people who are poor or who grew up poor and internalized that struggle.

I am 10. It’s my cousin’s birthday, and I’m going to a party at a cafe for all the kids. I’ve only been to a cafe once or twice before. We never had the money to attend such luxurious establishments. I have a nervous breakdown an hour before the party. I realize that I don’t have clothes that are not either a school uniform or pajamas. I don’t even own a pair of jeans. I have nothing to wear, but not in a “white girl getting ready to go out” kind of way. I find a top I grew out of to wear. It is now visibly small on me, but it has glitter. It’s festive. And it distracts your eyes from the pants that are clearly a part of a school uniform.

The media talked about Parasite as a masterpiece that addresses issues of inequality and lack of social mobility, drawing parallels between these systemic flaws in South Korea and the U.S. It is a masterpiece, and it does show the disparity between the poor and the rich in a unique way — yet the dry statistics of economic and social inequality in both countries disregard the emotional and psychological toll poverty has on people.

Online media ran their Parasite articles with words like “class conflict” and “class warfare.” And if this is a war, then the poor are losing. And the reason is…it is not humiliating enough to be “extremely rich.” That’s the reason. That’s it. It’s not the reforms, bills in Congress, or grassroots initiatives. It’s human emotions that have the upper hand here. It is not embarrassing to be a billionaire — but it is embarrassing to wear your sister’s hand-me-downs. It is not humiliating to pay your workers minimum wage while getting over $150,000 for each minute you are alive, but it is humiliating to try to stretch out your groceries till the end of the week and skip meals.

In a lot of analysis and reviews of the film, we see a lot of very degrading symbols associated with “the poor family” — word associations like “parasites,” “the Kims were leeching off the rich family,” “actors even moved like cockroaches,” etc. However, most of us know that systemically it is the rich who are leeching off the labor, resources, and time of the working class.

To pick just a few representative statistics, children from the top 1% are 77 times more likely to attend Ivy League schools than the poorest 20%. Harvard’s class of 2022 includes more legacy students than African American students. And the top 10% in the world are responsible for nearly half of global carbon emissions.

However, even when criticizing the rich and the systemic issues and loopholes that allow this inequality to exist in the first place, we are unable to view such behaviors and systems in a way that degrades or humiliates them. Be it legacy students at Ivy League schools, hires through nepotism, or “networking” that is actually only helping out your own…all of this is getting some criticism, but not humiliation and embarrassment. But those are powerful emotions, let me tell you.

The poor develop feelings of inadequacy and embarrassment around money; the rich don’t.

I am 12. I am finally brave enough to invite a friend over to my house to do homework together after school. We come in. She looks shocked, almost terrified. I say, “Sorry, we are remodeling the place”. She knows I am lying. I know she knows. We both feel awkward. She says she is hungry and asks if there is any food. I give an Oscar-worthy “let me see what we have” while I know damn well we have nothing. I open the cabinet, there is *gasp* nothing, except for a bag of sugar and one yellow onion. My friend starts laughing, making jokes about the weird family recipes we must have. I never invite friends over again.

With the current presidential race, while candidates are trying to outsmart each other in their appeals to the working-class demographic, the “vilifying” of rich people becomes a talking point. We are vilifying wealth and the “hard-earned” billions of dollars of Jeff Bezos. The same way one might argue Parasite vilifies the wealthy Parks. The only difference is that we don’t see the emotional retribution of the side that is being criticized. They seem to be unbothered by the criticism, not embarrassed by it at all. The narrative from neoliberals and conservatives is that, if you work hard enough, you can accumulate wealth. If you just push a little harder, you can start a business, and if you try a little longer, you can pay off the debt. The idea is that Beyonce and Zuckerberg have the same amount of hours in a day as you. So, what’s your excuse?

This idea is damaging, exploitative, and simply foolish.

When the Atlantic article “Escaping Poverty Requires Almost 20 Years With Nearly Nothing Going Wrong” came out and I saw all my upper-middle-class friends post about it on Facebook, expressing their opinions on the matter, I felt exposed. Because the reason why I “escaped” was exactly that. That nothing went wrong for exactly 20 years. Exactly 20 years. I didn’t get sick, members of my family didn’t get sick, our apartment wasn’t flooded/destroyed, etc. I got full scholarships, twice. Nothing went wrong. Nothing went wrong for 20 years for me to go from surviving to being able to afford movie tickets to see Parasite.

I am 20. My college boyfriend and I are at his house in Connecticut for Thanksgiving break. We both get strep throat. Both of us feel awful. His mom drives him to a nearby clinic, and he gets antibiotics. It’s amazing what a good insurance plan and a caring mother with a car can do for you. I don’t have the same privilege and stay in bed. He refuses to share his pills. I suffer through the end of the week and rush to the medical center when I get back on campus. I get a free prescription. I feel like I am not worthy of getting better.

Parasite is yet another masterpiece of one of the most brilliant filmmakers of our time touching upon topics of inequality. Bong Joon-ho probably had his own ideas in mind which we should not misconstrue, nor do I think we should add meaning to the film that he did not intend to be there in the first place. But we also shouldn’t view this film just as a mode for entertainment. We should analyze how it makes us feel, and perhaps how it doesn’t make us feel, what kind of conversation it sparks between us — and who is missing from those conversations?

I am 26. I walk out of a movie theater after watching Bong Joon-ho’s new film Parasite. I am not poor anymore. I am lower-middle class. I work hard. I can afford things. Maybe? I could afford this $12 movie ticket, so suck it, capitalism. I try to take care of my finances. I am lucky enough not to have student loans. I have “some” savings. I read articles and watch YouTube videos on financial advice on a regular basis.

But a family behind me just called me a “parasite.”

I am 10 again, wearing a glittery top that is way too small for me, holding a bag of sugar in one hand and an onion in the other. “Shut up, Carol.”

Anna is a content editor and a translator. She graduated with a degree in Linguistics from a small liberal arts college in upstate NY. There, she learned first-hand what frostbites are and that nothing can stop a guy named Kyle, who is wearing a vineyard vines T-shirt and salmon shorts, from telling her that she should pull herself up by her bootstraps.