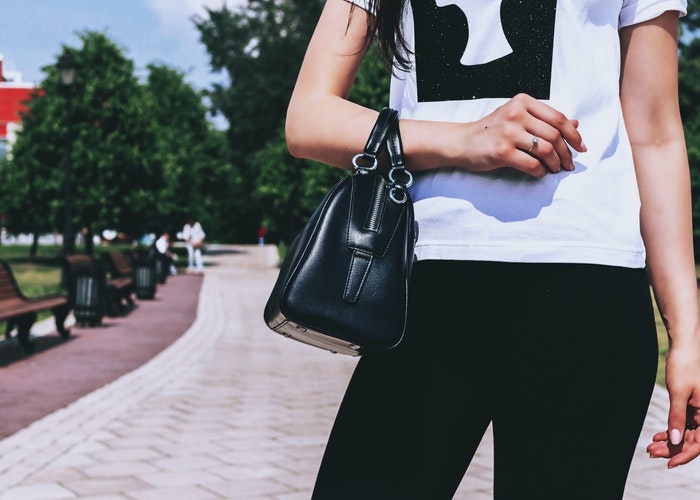 I’m embarrassed to say this now, but in 2018 I set a goal for myself: Buy a Gucci belt before the year ends.

My favorite artists sang about Gucci. My favorite influencers posted photos of Gucci. I wanted to be in the Gucci club, too, so I ordered a lookalike belt to wear before I could afford a real one of my own. I posted a video on Snapchat zooming in on the fake belt while “Gucci Gang” by Lil Pump played in the background. Then, on my birthday, a group of wonderful friends bought me the coveted belt.

I felt like it was the first sign that I too belonged in the magical (and expensive) land of New York City.

I loved wearing the belt at first, as it seemed like the ultimate status symbol. When I was attending work meetings with high-earners, or at a high-status bar, I felt like it was the first sign that I too belonged in the magical (and expensive) land of New York City. Even then I knew that this was a wrong feeling–people without Gucci belts certainly belong in New York City, and actually make up more of it than the ultra-wealthy, I still couldn’t shake the sensation that I needed to prove I could “make it” like the Manhattan socialites.

Just a few months later, I was in New Orleans and I found a Coach outlet in a mall. Products were 70-90% off–I couldn’t believe it! Purses that once felt so far out of reach were now just a small stretch for me. How could I pass up on a deal like that? All of a sudden, with one Gucci belt, my whole world opened up to the grandeur of luxury brands. I had never coveted items so much as the luxury pieces I saw people wearing at bars, on the subway, and even at work.

Too many of us jump on the designer bandwagon not because we appreciate the designs themselves, but because wearing something expensive makes us feel more valuable.

If you can’t see this coming, I’ll tell you the spoiler now: The belt doesn’t make me feel good anymore. The belt started to feel not only unnecessary but also symbolic of inequity, especially in a city like New York, where the wealth gap is ever climbing. To be clear, there’s nothing wrong with enjoying luxury labels, if that’s your thing. But too many of us jump on the designer bandwagon not because we appreciate the designs themselves, but because wearing something expensive makes us feel more valuable. And that’s not okay — how much you can afford to spend on a belt should never be indicative of how valuable you are as a human being.

What kind of assumptions were others making about me? What did it say about me that I wanted them to see my belt and think of me as somehow more valuable? Why did I decide that I deserved a $470 belt when others couldn’t afford the basic necessities? I stopped wearing the belt for those reasons, but also for a much more important one: I didn’t like what it once symbolized about myself.

The belt started to feel not only unnecessary but also symbolic of inequity, especially in a city like New York, where the wealth gap is ever climbing. Why did I decide that I deserved a $470 belt when others couldn’t afford basic necessities?

While the transition from brand admiration to brand obsession can be seamless and quick, it’s important to take a step back and think about what you’re supporting, why you want the item, and what it’s costing you to get it.

I still have the Gucci belt. My friends spent a pretty penny for me to have it and I’d feel dishonest to part with it. But I don’t have any desire to collect another one, and I try to catch myself when I’m becoming just a little too fond of a big brand. For reference, I bought a new pair of Lululemon leggings two months ago. I paid quite a bit for the item–just under $100. But at the same time, I saved for those leggings for months, researched the product to make sure it was something I truly wanted for myself — not just how others would perceive me wearing it —  and made sure I would wear the pair weekly. Simply put, I didn’t purchase my favorite pair of green leggings two months ago because of the hype around the brand or because of that beautiful, shiny logo. I purchased them because I knew the quality was top-notch, I loved the way they felt, and I had a need for the product.

If you find yourself buying brands more than you are buying products, I suggest asking yourself why. Whether it’s pressure from friends, social media, coworkers, or anyone else, think about if your purchases are truly in line with your values.