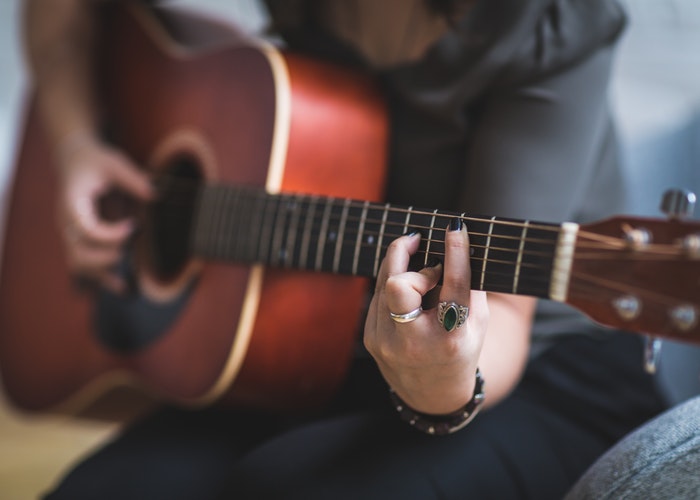 Being an independent singer-songwriter is not a career known for generating a lot of money, especially in the first few years. I’m four years post-grad and still only making about $20k a year. This is significantly less than any of my friends working in other industries. Despite that, I’ve been able to save quite a bit of money.

As of this month, I’ve officially saved $20k — as much as my yearly salary! I took a few years, and I had a couple of big advantages working in my favor. First, I’m lucky that I went to a two-year college program in my town and lived at home during school, which allowed me to graduate without debt. I only had around $200 in my bank account when I graduated, but not having debt put me ahead of the savings game. I’m also lucky that I’ve been able to live with my parents when I wanted to boost my savings, which accounted for a large chunk of it. Whether it’s a two-year program or an understanding family, not everyone has these advantages. But it goes to show that anything you can do to avoid debt and lower your largest budgetary expense, which is presumably housing, will make a big difference.

But while advantageous, these moves alone didn’t help me reach my savings goal. There were other financial habits and lessons I picked up along the way that really helped me get to that milestone. The following tips and habits have helped me save more than I ever thought I could at this age, especially at my modest income level.

My town doesn’t have great transit (that was one of the great things about Toronto – similar to New York you could pretty much get anywhere on the subway/transit system). Yet I still decide to take transit instead of driving. 80% of my friend group has cars or shares with their parents. It’s not the norm to take public transit in my city, but taking the bus has saved me big time. Since I am a low-income earner, I qualify for a subsidized bus pass that is about $75 a month. I only take rideshares about 1- 2 times a month, if ever, and this keeps my transit costs at about $100. On average, drivers in my city spend about $5000 a year on their cars between insurance, gas, and upkeep. I did the math and the amount of time I take commuting on the bus is actually less than the number of hours I would have to work in order to pay for a car. 100% worth it. Amount Saved: Approx. $10,000.

I meticulously track my income.

I LOVE lists and anything visual – I’m the kind of person who will put something on a list they’ve already done just so they can cross it off. I was always good with my money but it wasn’t until the end of 2018 that I started keeping track of everything. Google Sheets has a super easy-to-fill-out spreadsheet and I started with that one. I also made an additional spreadsheet that tracks my savings categories and how much each grows monthly (emergency fund, retirement, travel). I got fancy and figured out how to turn the numbers into pie charts and bar graphs so I can see the growth over time. For me that was a huge motivator – it turned savings into a game. Even if you just start with tracking your basic income and expenses, it’s a great way to visualize your money and watch your savings grow.

I’m specific with my expenses.

Working close to tons of fast food and coffee places, I was spending way too much money on food. Even when I brought lunch to work I would see other people with a fancy salad or latte and I would usually cave and follow suit. These expenses used to be lumped in with my other restaurant spending, so I would always go over budget in that category but I justified it because I was spending time with people I love.  To resolve this, I decided to make two different categories for my food budget: “fast food” and “experiences. I wanted to see how much I was spending on convenience food versus outings with friends and family, which I value so much more. Turns out, I was using a huge part of my budget on things I didn’t need, like Starbucks. I was able to cut my budget down a ton and now max my convenience budget at $40 each month. I still sometimes spend more on restaurants than I planned, but I know I am using that money in a way that matters.  Amount Saved: Approx. $500

I have multiple jobs.

There is definitely a sweet spot for this. Since graduating, , I’ve had anywhere from two to five jobs.Five jobs is way too many and I do not recommend it, but having an extra job has always paid off. Even when I factor in business expenses, I could have easily gotten by with one part-time job once I moved back in with my parents. Still, I chose to keep multiple jobs so I could increase my savings and my income at the same time. Having multiple sources of income has been great because I could live off of one income source and save the other.   Additional income: $5,000

I live below my (already modest) means.

Even though I’m probably the person in my friend group with the most in savings, I still live like the broke musician friend. I’m the first one to suggest a backyard fire-pit hangout (pre-COVID, of course) instead of going to a bar. I always make birthday or holiday gifts for my friends. These small habits add up.

As an independent singer-songwriter, I am essentially a small business of one employee. I am still one emerging artist and that takes a lot of investment, in-studio time, recording costs, travel costs for tours and conferences, and so on. It costs thousands each year, but it’s an investment I’m happy and proud to make. These choices have allowed me to start building a career and recording music, while also saving for long-term goals. Not all of them are easy choices, but overall, they’ve improved my quality of life and given me the flexibility to build my dream career.