How Social Media Takes A Chunk Out Of Your Checking Account 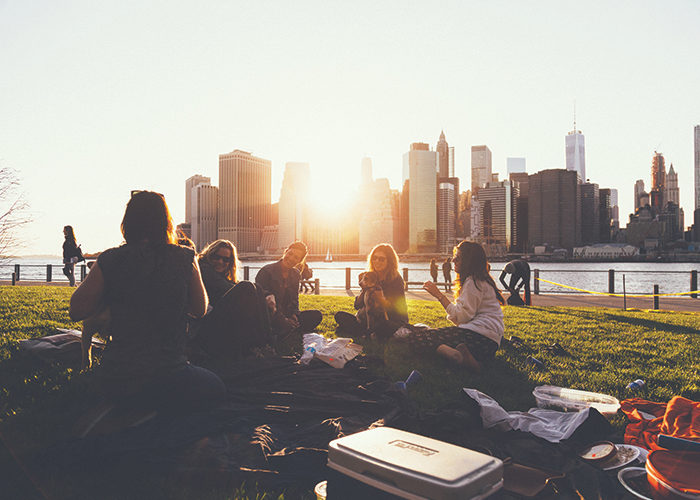 As human beings, we intuitively compare ourselves to others, especially, it seems, when we are women. Think about the times you’ve asked a friend, “What did you think when Josie showed up with her ex to the party?” or “How did you feel when the doctor put you on the same pill my doctor wants me on?” or “Do you think the weather in Miami is good this time of year?” We ask trusted friends how they think a meeting went, or what they think about our new kicks because we want to balance someone else’s opinion with our own. We perceive value in others’ opinions and their experiences, and we compare what happened to those around us with what happened (or what we expect to happen) to ourselves. It’s human nature, and I suspect it’s a tool we use to help identify our own feelings. However, everyone has seen how this habit of comparing ourselves to others gets tricky. At best, you may be gaining valuable insight, but you may also stray into idle gossip, or into the trap of never-quite-measuring-up.
The commonly used turns of phrase that indicate personal comparisons are certainly not new social constructs:  keeping up with the Joneses, comparisonitis, and FOMO, to name just a few. Call it whatever you want, but it seems like almost everyone is obsessed with what everyone else is doing, and the ruler we use to measure up to other people is social media. Thanks to social media, and the ingenious apps that keep us plugged in, we can compare ourselves to others incessantly and instantaneously. It’s a fecund topic that crops up again and again, even here at TFD, and it made me start wondering about the health and financial implications of FOMO in this day and age.

It doesn’t take more than a few minutes of quick and honest soul-searching (or internet research) to discover that FOMO (Fear Of Missing Out), compounded by the social media we consume every day, is bad for us in identifiable emotional and psychological ways. In 2014, researchers from the University of Amsterdam [1] concluded that happiness and well-being decreased as internet consumption increased, and reminded us that well-being can have physical health implications. The study also noted that women reported more depression and a lower sense of self-esteem than their male counterparts. This effect is pronounced in young adults, and I’d venture to guess that this is because young adults are some of the most compulsive internet users (thanks to the social media apps that ping our phones all day).

The Huffington Post ran an article considering these studies, including one from Ottawa’s Public Health department, which warns us that teens who clock several hours a day on sites like Facebook, Twitter, and Instagram have more stress and depression. The article also posed the question of whether individuals with such underlying psychological issues seek out more time on social media platforms to begin with. Very interesting stuff. The article also did a great job of explaining that the problem isn’t the sites themselves, but rather the amount of time we spend plugged into them instead of socializing in more organic ways within our community. The Telegraph echoes these general sentiments: after examining the UK’s Office for National Statistics report, they offered a lengthy article linking mental health issues, like stress and anxiety, to excessive time spent on social media sites. They also noted that girls spend more time on them than boys.

So now a word to the wise — first and foremost, all social media platforms are business endeavors. Anyone who watches the news with some regularity has seen the headlines on the disappointingly-performing Twitter stock investments. And who hasn’t “liked” or “followed” one of their favorite brick-and-mortar businesses online? There have also been countless individuals leap-frogging from these platforms to make money for themselves as “influencers.” Entrepreneur online has a surprisingly upfront article outlining how this marketing strategy works. If you haven’t yet seen the conversations and trolling surrounding these business ventures, suffice it to say that being a “social influencer” is a new way to sell a lifestyle and the products associated with those lifestyles. Such marketing can be subversive, and somebody with a wicked case of FOMO is especially vulnerable to opening their wallet to buy the same expensive products an influencer got for free. We all know deep down that the shiny designer bag isn’t going to transform us into the carefree jet-setter we see perfectly coiffed and sipping champagne on her way to Cabo. However, it might make us feel like we’re on the right track. We think that by having that bag, we’ll be just one iota closer to becoming the ~beautiful trendy girl~.

The LA Times has maybe the best, most specific article on businesses seeking out attractive, cool young women with large social media followings to boost their sales:

“Influencers opt to requests from companies, which sometimes review content before publication. Money exchanges hands after posting, with the network taking a cut. A single post on Twitter might cost a company $200, while a more extensive campaign in which a reviewer makes in-person visits to the company might run $200,000.”

This isn’t idle speculation; there is cash money out there being made and many personal accounts that demonstrate how powerful these messages are. These messages can burrow deeply in your mind and negatively impact behavior and self-esteem.

There are real financial implications to consider in conversations about FOMO, from career advancement to financial literacy. One quick question: is your mom like mine, constantly telling you to watch your back when it comes to posting on Facebook because your boss may be watching? Well, there was a great study [2] that was published recently about hiring discrimination and social media networks, which concludes that a significant amount of US employers do search for job applicants on the internet. It suggests that overall discrimination based on your personal accounts may not be widespread. It also defends the discretionary sharing of personal information (such as religious belief or sexual orientation) online because not being present may show a lack of social skills, or worse, you potentially have something to hide.

Recently, TFD had a reader who confessed she had allowed her FOMO and online persona to not only prevent her from building personal financial stability, but landed her in over $3,000 of credit card debt. In one xoJane article, author Karyn Polewaczyk wrote a wonderfully honest article about her own struggle with FOMO, and how it took control of her life. Karyn found herself in a good job in her field but was living paycheck to paycheck. She took too many vacations she couldn’t afford, and she spent $$$ on too many extravagant nights out with the girls. Karyn’s story is particularly inspiring because she was able to turn her finances around and empower herself to say “no” to extraneous outings. She found healthy ways to navigate life and take control of her money.

To me, there’s little doubt about it: FOMO + excessive social media consumption is bad for you and your personal financial goals. Every week, TFD combats that fakeness and inherent sense of FOMO by celebrating #totalhonestytuesday, where everyone is invited to show the imperfect parts of their lives on their social media accounts. It’s an inspiring stand for realness and solidarity. It shows us that it is possible to take a step back from unattainable perfection and filters, and just have fun. #THT is important, especially for women and girls, because it helps identify the subversive messages and psychology presented to us each day. #THT helps us build a framework to think about real personal finance goals and embrace how they actually look IRL. We don’t all have to be on a plane to an exotic location, closing on a house, or dropping big bucks on a trendy new wardrobe.

It’s OK to measure success by how happy you are today simply reading in your sunny window, or in transferring just $20 from checking to savings, or by making spaghetti at home with your boo on a Saturday night. It’s OK to celebrate our failures as well as our victories and allow our growth (the good and bad) to be part of the story we present to the world. We are all badass, ever-changing, works-in-progress, and it’s OK not to check your Instagram every time you get a notification. Hell, you can even ignore your email account, and take a day off. Let’s get real, y’all, and use social media for support and good feelz instead of spreading super contagious and emotionally deadly comparisonitis.

Other interesting links you should definitely check out:

1. The shocking reality of being too famous on the internet to actually make money

2. DUDE, there is a scale to measure facebook addiction

3. Some employers actively use social media to recruit employees

4. The NY Times considers whether your online presence is just as important as your resume

Keisha is a nurse in Nashville, TN. She likes sandwiches and seeing local bands in dive bars with her boyfriend, who sometimes wears t-shirts with his own face on them. She is on Instagram.