How Testing Positive For COVID Impacted My Life & Money 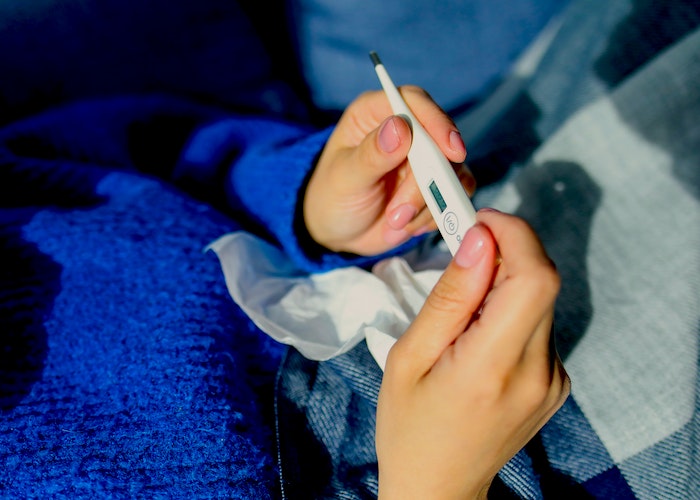 The nurse was so nonchalant about the positive COVID test, that my boyfriend laughed in shock before saying, “Wait, what?” Three minutes later I found out he definitely had COVID, and I knew that meant I did, too.

I had been doing everything right for months. I had been in a 100% quarantine from March through May before moving to Alaska — where there were relatively few COVID cases — for a new job. I was still wearing a mask, carrying hand sanitizer, and socially distancing, and decided to visit my boyfriend for one week in July after the cases had started decreasing. We planned to be careful, staying mostly at home, but we just wanted to spend a few days together. As luck would have it there was a surge in my boyfriend’s town that week and, well, the rest is history (and perhaps still lingering in my lungs, we’ll find out eventually).

We decided to take “Just in case” tests the day I arrived to be safe. I was working a summer position as an essential worker in childcare and wanted to be completely sure I would not bring COVID back to the children I was in contact with. I didn’t want to miss any time from such a short job but knew I was going to have to miss at least an additional week of work if I tested positive. In Alaska, the guideline was that even if I tested negative, I would still have to quarantine fourteen days after our last contact. Since I was staying at my boyfriend’s house and we were under strict quarantine, that meant I would need to wait until after he was cleared. If I had a positive test, I could return to work 10 days after the test or after I first had symptoms.

In the end, it took me over a week to test positive and I ended up missing two weeks worth of work. During my time off, I was being compensated by way of a grant from an outside organization, which ultimately helped them after they’d lost three months of business due to COVID closures. For the two weeks they had to pay to temporarily replace me, the money came out of their limited budget. Truth is, my boss had approved my trip (it had been her suggestion), but missing two weeks of the nine-week job left me feeling like I had let them down — big time.

I contacted the grant organization and they said they would also have to stop paying me if I wasn’t completing duties similar to what I had been doing while working in person. This meant we had to scramble to find something that would still allow me to receive a paycheck. Ultimately, I did end up finding enough work to do, but I was tasked with work that was less fulfilling than what I’d originally been doing every day with the children, prior to my diagnosis. I spent those three weeks in quarantine, away from the job site, frustrated with myself for having risked the trip.

Though I was beyond lucky to keep receiving the same paycheck, other financial concerns added to the stress of having such a detrimental illness. Since I had just moved to a new state, I didn’t have any health insurance. I still technically had the public health insurance from my previous state, but that would only cover “emergencies” out-of-state, and the information on what constitutes a real emergency is jargoned and practically impossible to understand. I was only receiving a living stipend through the grant and could not afford health insurance, but knew I would have it with the new job that I was scheduled to start three weeks later.

The clinic in my boyfriend’s town assured us that their COVID tests were free, which was a relief, as I had yet to see other clinics doing the same. I took several tests – as it took over a week for me to test positive (this virus really takes its time to spread through your body.)  The medical professionals testing me wanted me to take a rapid and regular test each time since I had encountered exposure.

“The day before I tested positive, I woke up in the middle of the night feeling like my body had forgotten how to breathe.”

The day before I tested positive, I woke up in the middle of the night feeling like my body had forgotten how to breathe. My boyfriend wanted to rush me to the hospital but I motioned for him to get my inhaler first; I have chronic asthma and was hoping that would help. I could not even begin to imagine what a trip to the hospital might end up costing and was desperate to try anything else first.

Within twenty minutes, my breathing was feeling relatively normal again, and I was able to avoid the hospital trip. The next day, I took my final COVID test and found out 48 hours later that I was indeed positive. The positive test had taken so long to show up in my results, that many of my symptoms, – shortness of breath, stuffy nose and achiness – were already receding, adding to the confusion about when I would be able to return to work. I spent the next twelve days eating soup (flavorless, I wasn’t wasting my garlic after losing my sense of taste and smell) and was told I could return to work the following Monday.

Though I was not affected by my COVID diagnosis nearly as much as most Americans, I was still impacted much more than I had expected. Missing those weeks of work left me stressed that they wouldn’t have enough for me to do and that I could lose my job and paycheck at any moment. I let down the organization more than I have ever let an employer down before, and they had to use reserve funds to cover me for the two weeks I was recovering. I had to move my flight four times until I was able to fly and – though change fees have now been virtually eliminated – I still had to pay the increase in the flight cost each time and ended up spending half of my post-rent stipend money on the fees.

It’s been over three months since I was diagnosed, and I still get a little scare each time the clinic calls me. I’ve received several calls asking for a $50 payment for each test, and I have to go through the same clarification process to get them to understand (again) that I was uninsured and shouldn’t owe a fee. Regardless, I’ve retroactively applied for Alaska’s public health insurance just in case.

“The experience still haunts me and is one I hope to never repeat.”

The chest pain that has continued since the diagnosis has started receding and I paid off all of my flights and other miscellaneous costs, but the experience still haunts me and is one I hope to never repeat. I’m now living in a small village on the coast – a two-hour medevac from the nearest hospital. My COVID experience has made me more aware than ever of the impact of inadequate medical care, an issue so many people face, and has opened my eyes to what the reality would be like here. I’m doing my best to continue daily life without living with the fear of what will happen if COVID makes it into our tiny village, but I’m prepared to use this experience to educate others if it does.

Taryn is a teacher currently living in the Alaskan Bush.